The shining example of NES tough
24 February, 2021 by rawmeatcowboy | Comments: 4 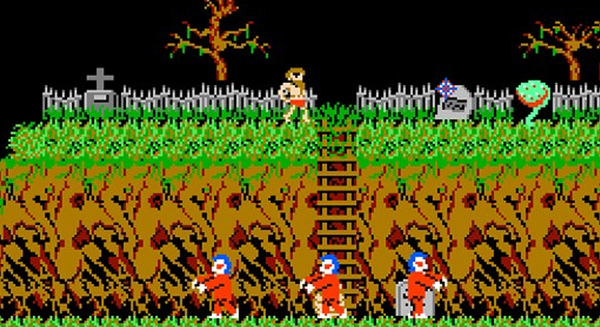 Most titles tied to the Ghosts ‘n Goblins franchise are known for insane difficulty, but there might not be a more punishing version than the NES port. That wasn't by accident either. In an interview with Game Informer, series director Tokuro Fujiwara discusses the plans to crank up the difficulty for the home port, which led to him being unable to beat the game all these years later.

“The arcade version had a reputation for being difficult, but there was a demand to make the NES version even harder since it was thought the game would be too easy for those who already played it at the arcade. We thought, ‘OK, let’s make it a little harder’ but as we made further and further adjustments, it ended up becoming the hardest game in the series. To this day, I don’t even have the confidence to beat the NES version of Ghosts ‘n Goblins. But, if you have the chance, please give it a shot and experience the ultimate difficulty.”

Four new NES games from indie devs, available in one package for just $20! The 8-Bit Homebrew Bundle is available now, and you can read more about each game included below.

In an international collaboration, four indie NES devs team up to bring you this four pack of 8-Bit NES tastiness! Chock full of adventure, platforming, and puzzle solving goodness! Right off the heels of successful crowdfunding campaigns, these games are sure to bring you hours and hours of retro excitement!

Flea is a challenging platformer with an intriguing back story. Play as Henry the Hyperactive Flea who just can’t stop jumping! Navigate the beast and collect blood to get the heart of the problems.

A group of dangerous space pirates have hidden in the abandoned Neoterica Research Facility, built into the side of a huge asteroid. The facility is very dangerous, the home of many fearsome monsters and failed experiments. Valuable relics and technology exist in the facility but most adventurers are too scared to even try and enter it.

You are Nix, the only bounty hunter tenacious enough to enter the facility and take down the pirates. Use your special abilities as a Caniden to make your way deep into the facility, capture the pirates, and discover the secrets of The Paradox Relic!

Milwaukee’s hungriest band Space Raft are in pursuit of their jealous ex-bass player Srini in this new homebrew adventure for the NES. Take the wheel of the Space Raft Van and guide the band past obstacles to beat the traffic, or control the members of Space Raft to clear the screen of sandwiches and thwart the plans of Srinimania.

Each game’s NES ROM format and can be played on most emulators, we recommend MESEN.

Games that pushed the NES to its limit
21 February, 2021 by rawmeatcowboy | Comments: 1

This one was put together back in the summer - where Audi Sorlie visited John Linneman and together they played their way through a bunch of great retro titles. In this one, It's the NES/Famicom that takes centre-stage. Moon Crystal, Batman: Return of The Joker (aka Dynamite Batman) and Haradius ZERO are three games that really put the veteran Nintendo hardware through its paces - so let's get to it!

The Switch Online NES/SNES collections got updated today, adding in four more games altogether. Check out gameplay from all of them above! 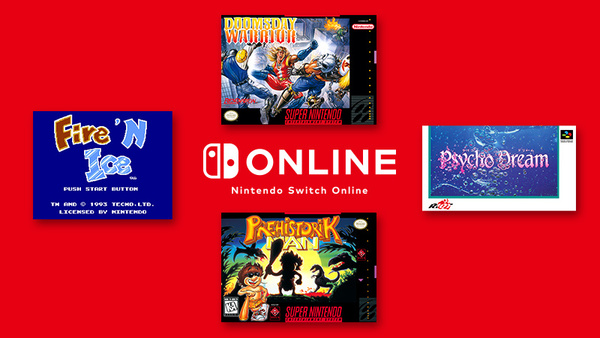 The NES and SNES Nintendo Switch Online applications (NA/EU) have been updated to add 4 more total games to the services. Fire ‘n Ice is now available with Version 5.2.0 of the NES app, and Doomsday Warrior, Psycho Dream, and Prehistorik Man can be accessed by downloading Version 2.2.0 of the SNES app.

Looking for something new to play on your NES or Famicom? Why not check out Blazing Rangers? A new demo is now available, and you can get details on how to access it below.

The demo contains all game modes and a total of four playable levels, with a highscore given at the end. To celebrate the release of the demo, a highscore contest for it is being held.

The full game release for NES & FC will eventually be available on physical cartridges in three region variants and is scheduled to release in April/May of 2021. The publisher First Press Games currently offers preorders for the game.

Blazing Rangers (Honō no Rangerman in Japan) is a newly-developed NES/FC game by Karu_gamo, who you might know from his previous works Protect Me Knight and Gotta Protectors, as well as the former NES/FC release Amazon's Running Diet.

Features of the full game:

exciting & unique fire-fighting gameplay for FC and compatible hardware
more than 32 challenging levels with many hidden secrets
a wide array of power-ups and enemies
two different game modes with strong changes to the game-play
2-player co-operative play, a partner can join the game at any time
randomly generated dangers, each play-through will challenge you in new ways
The game was developed with mapper0 restrictions, which were the earliest cartridges for NES & FC!

The ultimate Nintendo fan (Matthew Taranto) teams up with Nintendo’s own Gamemaster (Howard Phillips) to make a tell-all book!

Howard got his start at Nintendo unloading thousands of Donkey Kong arcade machines into a warehouse, but within a decade became Director, Game Creative and "Gamemaster" - a sort of corporate mascot for the company. You might recognize him from Nintendo Power's Howard & Nester comics! Well, the Gamemaster is back to dole out info in a tell-all book about his mostly fun-filled 10 years at Nintendo of America (NOA)! From behind-the-scenes secrets to his own personal reviews of over 100 games, Howard's ready to prove what we always knew--that knowledge is (Nintendo) power!

Both Howard and Matthew turned to Kickstarter to fund the project, and it's already reached its funding goal. You can still kick in some cash and help hit stretch goals here.

Japan gets some exclusive titles
09 February, 2021 by rawmeatcowboy | Comments: 2

Just like in North America and Europe, the Switch Online Famicom/Super Famicom collections are getting more games as well. Due out later this month are Psycho Dream, Shin Megami Tensei II, Mario's Super Picross, and Solomon's Key 2. You can check out clips for each above.

Legacy systems get some love
09 February, 2021 by rawmeatcowboy | Comments: 17

Nintendo has revealed the next round of NES and SNES games coming to the Switch Online NES and SNES collections. 1 NES and 3 SNES games are on the way, and you can read about all of them below.

On Feb. 17, visit worlds virtual, fantastic and oddly familiar when three Super NES™ games and one NES™ game join the Nintendo Switch Online service. This selection of unexpected, action-filled adventures will challenge you to summon whatever it takes to save the Earth, your prehistoric village, a magical island or someone lost in a terrifying virtual fantasy.

Available for the first time in the U.S., Psycho Dream is arriving to the Super Nintendo Entertainment System™ – Nintendo Switch Online library! Originally available on the Super Famicom™ system in Japan, Psycho Dream is a reality-bending action platformer that sends you into a virtual fantasy game to rescue a missing person.

Also joining the Super NES library are DOOMSDAY WARRIOR, an action game in which you alone stand against the powerful Doom Squad and their quest for world domination, and Prehistorik Man, a colorful action game that tasks you with saving your village from hungry, hungry dinosaurs.

Plus, Fire ’n Ice, the magical, flame-fighting puzzler that lets you create cool puzzles of your own, will be arriving for the Nintendo Entertainment System™ – Nintendo Switch Online collection.

With these new additions, a Nintendo Switch Online membership will grant instant access to 99 classic games, with libraries that run the gamut of cult action hits, touchstone fan favorites and U.S. debuts of notable games from the classic era of gaming.

Read on for additional details about the games arriving this month:

Psycho Dream – When Sayaka doesn’t return to reality after entering an immersive virtual world known as a D-Movie, the protagonists, Ryo and Maria, must progress through a terrifying fantasy game called Legend of the Fallen Capital to rescue her and bring her back to reality.

Prehistorik Man – Sam the caveman’s quest to save his village begins! Sam lives in a village whose food is stolen by dinosaurs. To get more, Sam must collect bones, which he can then use to buy food. On his way, he’ll need to make use of a variety of weapons, vehicles and attacks, including shouting, to attack all on-screen foes. Can Sam reach the dinosaur graveyard and collect enough bones?

Fire ’n Ice– As Dana, you have been chosen by the Queen of the Winter Fairies to bear the power of ice magic. With it, you must defend your home, Coolmint Island, from the wicked wizard Druidle and his flames!

All of these games are playable with a Nintendo Switch Online membership, which offers access to libraries of classic Super NES™ and NES™ games, such as The Legend of Zelda™: A Link to the Past™, Donkey Kong Country™ and Super Mario Bros.™ 3.

In the year 198X, an elite American ex-soldier traveled into the jungle for a stealth mission that ended in a showdown with a Soviet HIND-D helicopter. Sound familiar? No, this isn't Metal Gear (that's next episode), but instead a game based on a film that very clearly has served as a primary text for Hideo Kojima through the years: Rambo, aka First Blood Part II.