Powered with incredible speed, Sonic the Hedgehog (voiced by Ben Schwartz), aka The Blue Blur, embraces his new home on Earth. That is, until he accidentally knocks out the power grid and sparks the attention of super-uncool evil genius Dr. Robotnik (Jim Carrey). Now it’s super-villain vs. super-sonic in an all-out race across the globe to stop Robotnik from using his unique power for world domination. Sonic teams up with The Donut Lord, aka Sheriff Tom Wachowski (James Marsden), to save the planet in this action-packed hit that’s fun for the whole family. 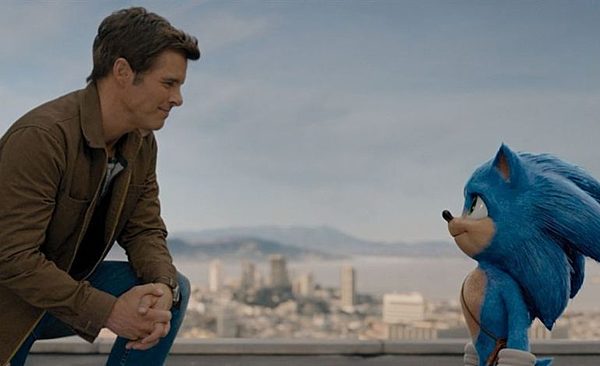 James Marsden plays the lead (human) role in Sonic the Hedgehog, and he does a fine job with it. Seems like Marsden had plenty of fun with the project, and he's more than happy it found success. He talks about the film's reception in an interview with Comicbook.com.

It feels great. It feels good, because this is what you'd always hoped for when you step foot into the project, and I thought we had a good script and a great cast and an excellent director and a good team. It was a rocky road getting through it. I think we liked the movie we were making, but it got to the point where we needed to pay attention to what the fans wanted. I'm very proud and happy that we did it, and it paid off. I think we came out right at the right time before the world changed, and we were a nice dose of like, "Oh, I remember how movies can be fun and family movies can be just as entertaining as anything." We got lucky, and also, on top of that, I feel like we just made a good product and I'm super proud of it.

Ben Schwartz says having Jim Carrey in the Sonic the Hedgehog movie legitimizes the whole film, and they were lucky to have him

Definitely a big get for the project
06 April, 2020 by rawmeatcowboy | Comments: 0 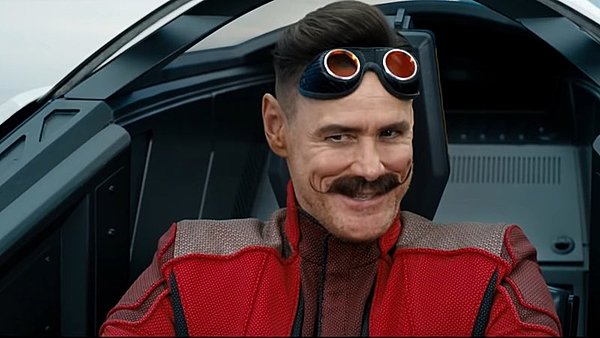 When Jim Carrey was announced as the role of Dr. Robotnik in the Sonic the Hedgehog movie, many people were taken aback. It was definitely a bit of clout for the film to land such a notable and successful actor. Ben Schwartz, the voice of Sonic in the film, feels the exact same way. In an interview with Cinemablend, Schwartz opens up about how lucky the project was to have Carrey involved.

I think we just got lucky that Jim Carrey happened to decide he just wanted to do this movie. Because Jim Carrey being [in] just legitimizes the whole thing. And then also he’s just like, ‘I’m gonna do comedy, the type of comedy that you’ve seen me do back in the day, I’m gonna do that again.’ He can do everything and he’s like, ‘I’m gonna choose this.’

I mean when I watched it for the first time I literally went to – we were in a small theater with just like three or four people – and I was like, ‘Oh my god,’ because I wasn’t on set. So, the first time that I saw Jim Carrey stuff was when I was getting screened and I was like, ‘Oh my god, we are so lucky. He just decided this is the movie he’s gonna do this again in.’

We've got a bounty of Sonic the Hedgehog movie info today, and it starts off with the above image. As confirmed by Sonic the Hedgehog artist Tyson Hesse, the echidna that fires an arrow at Sonic's owl mother early in the film is actually Pachacamac from Sonic Adventure. Pachacamac, the father of Tikal, served as the mystic chief and warlord of the Knuckles Clan 4,000 years ago.

Along with that, Hesse also confirms that the cameo from the post-credits scene in Sonic the Hedgehog was planned from the very start. We'll refrain from spoiling who turns up, but mention that Hesse said he worked on the design for that character, but wasn't the one responsible for the cameo.

Finally, we have comment form Ben Schwartz, the voice of Sonic the Hedgehog. In an interview with Cinemablend's ReelBlend podcast, Schwartz talks about the reaction to the original Sonic design, and the subsequent redesign. See what he had to say below.

"The way that I saw it first I think was on the trailer. I had to do ADR for the actual trailer because up until then it was all very temp," Schwartz said. "But I believe the trailer had to be done very quickly or something like that. So the first time I saw it was then. And then when it came out and the reaction it got when it came out. First of all we didn’t know if anyone would care. We care because we like video games and movies it seems. But the biggest thing we learned from that was that when it came out so many people were so vocal and it became a huge thing. It got passed around so much. It may have not been the most positive reason why it was getting passed around, but it got passed around so much and so people had such heartfelt passionate ideas for it. That the biggest thing we learned was ‘Oh, people care a lot. Let’s look at this and figure it out.'

The big thing they were trying to do was how do you bring Sonic into the real world? Because he’s a computer character, you can’t just bring him in. How will he look in a real life situation? So I think that’s what they were tackling. But I will say the new version… when I was doing my voice the whole time I was doing it the way the new version looks. In my head, that’s the way it looked. So when I saw the first one I was like ok, but when I saw the second one I was like ‘This is in my head what the little guy looks like.’"

We've already had one feature that gave us a behind-the-scenes look at what went into making Sonic the Hedgehog, and now a second clip has surfaced. Once again we hear from both Jim Carrey and James Marsden on their work for the film, and the fun atmosphere behind the camera.

As we mentioned a few days back, the digital release for Sonic the Hedgehog takes place today! If you missed the movie while it was in theaters, you can now enjoy it from the comfort of your own home. The movie is available to digitally rent/purchase via Apple TV, Prime Video, Vudu, Google Play, YouTube, Microsoft Store, Fandango Now, Xfinity, and AMC Theaters On Demand. Make your pick here and start watching!

If you're waiting for the physical release, you still have quite a bit of time. Sonic won't be coming to DVD/Blu-ray until May 19th, 2020.

Check out a cut "baby Sonic" scene from Sonic the Hedgehog

Sonic the Hedgehog, just like any other movie, as a bunch of scenes that didn't make the final cut. Some of them didn't even get finished completely. That's what we have in the video above, which is an in-production scene that features baby Sonic. Check out the baby blue blur running around Earth in the spot above.

Thanks to Andreslop24 for the heads up!
Rating: 2

Jim Carrey, James Marsden, and director Jeff Fowler on bringing the iconic video game villain Doctor Robotnik to life in the feature film version of Sonic the Hedgehog. Sonic the Hedgehog will be available on Digital on March 31 and on 4K, Blu-ray and DVD on May 19.

The upcoming DVD/Blu-ray release of Sonic the Hedgehog comes out May 19th, 2020, and it's packed with bonus features. One of those features is a "Around the World in 80 Seconds" animation that is narrated by Sonic. You can see a part of that animation in the clip above.

Thanks to Andreslop24 for the heads up!
Source: Link
Rating: 2 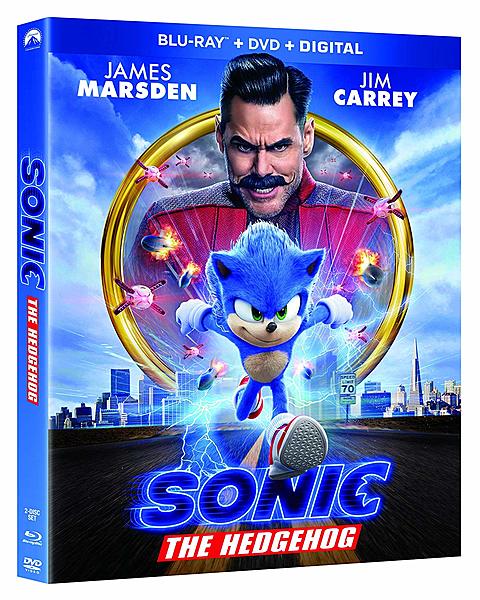 Get ready for epic fun and super-sonic action when everyone’s favorite hedgehog races home in the blockbuster hit SONIC THE HEDGEHOG, debuting early for purchase on Digital March 31, 2020 from Paramount Home Entertainment. The film will be available on 4K Ultra HD, Blu-ray, DVD and for rental on demand or disc May 19.

The Digital*, 4K Ultra HD, and Blu-ray releases are packed with sensational bonus features: See Sonic the Hedgehog’s next adventure around the world in a new animation; get more of Sonic in deleted scenes; laugh at the hilarious blooper reel; explore the origins of the legendary blue hedgehog; see Jim Carrey bring Dr. Robotnik to life; watch along with awesome commentary by director Jeff Fowler and the voice of Sonic, Ben Schwartz; and more! Plus, for a limited time, the 4K Ultra HD and Blu-ray Combo packs will include a printed, Limited Edition comic book featuring an adventure with Sonic and The Donut Lord.

Powered with incredible speed, Sonic the Hedgehog (voiced by Ben Schwartz), aka The Blue Blur, embraces his new home on Earth. That is, until he accidentally knocks out the power grid and sparks the attention of super-uncool evil genius Dr. Robotnik (Jim Carrey). Now it’s super-villain vs. super-sonic in an all-out race across the globe to stop Robotnik from using his unique power for world domination. Sonic teams up with The Donut Lord, aka Sheriff Tom Wachowski (James Marsden), to save the planet in this action-packed hit that’s fun for the whole family.

Commentary by director Jeff Fowler and the voice of Sonic, Ben Schwartz
Around the World in 80 Seconds—See Sonic’s next adventure!
Deleted Scenes—Director Jeff Fowler introduces deleted scenes
Bloopers—Laugh along with Jim Carrey and the cast
“Speed Me Up” Music Video
For the Love of Sonic—Jim Carrey and the cast discuss what Sonic the Hedgehog means to them
Building Robotnik with Jim Carrey—See Jim Carrey bring supervillain Dr. Robotnik to life
The Blue Blur: Origins of Sonic—Explore the origins of the legendary Blue Blur
Sonic On Set—Visit the set with the voice of Sonic, Ben Schwartz

The 4K Ultra HD Digital and 4K Ultra HD disc releases present the film in Dolby Vision®, which brings entertainment to life through ultra-vivid picture quality with spectacular colors, highlights that are up to 40 times brighter, and blacks that are 10 times darker. The film also boasts a Dolby Atmos® soundtrack remixed specifically for the home to place audio anywhere in the room, including overhead**.

The SONIC THE HEDGEHOG DVD includes the feature film in standard definition.