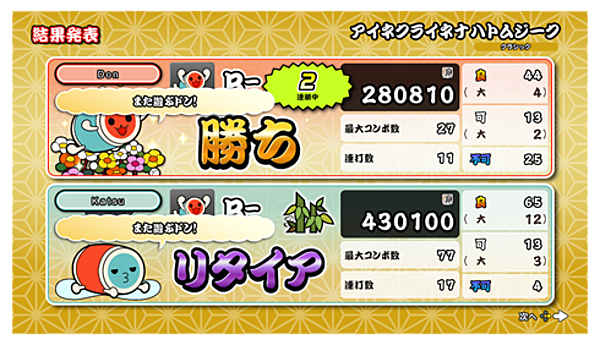 Version 1.2.4 for Taiko no Tatsujin: Drum 'N' Fun on Nintendo Switch is now available in Japan from Bandai Namco. Not much has been changed or added to the game, but the online ranked matches will now display a different result screen (pictured above).

My Hero One's Justice 2 releasing for Switch in the West in 2020, more info to be revealed at NYCC

Heroes, are you ready for your next lesson at UA? Get ready to go PLUS ULTRA again with MY HERO ONE'S JUSTICE 2!

Deku, All Might, and many of your favorite characters will return to PS4, X1, Steam, and Switch in 2020. More info to come at New York Comic Con! #MHOJ2 #NYCC pic.twitter.com/pSHbpzh0l0

Namco comments on developing for Switch, claims the system is great at "igniting play" 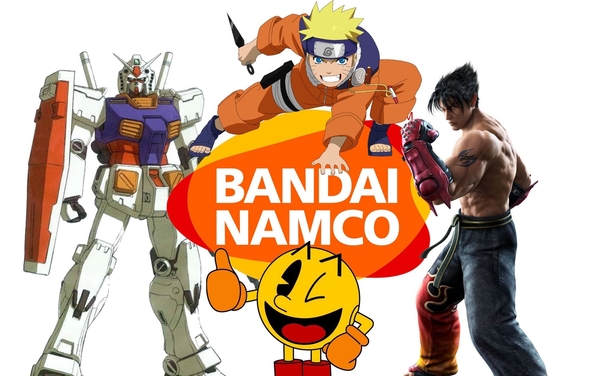 Bandai Namco recently held an earnings press conference, and according to a Tweet by Takashi Mochizuki, the company stated the following when discussing the Nintendo Switch:

Could Namco Museum see a retail release on Switch? According to Nintendo's Nintendo Direct, Namco Museum is coming to the Switch eShop. No mention of a retail version was made. This makes things confusing when you go over to the listing for the game on Nintendo.com, which includes the boxart you see above. Boxart for a digital-only title? Seems like something is up here.

It's also worth noting that the official press release for the game doesn't state anything about eShop or retail either way. It just says the game is coming to the Switch. Over the past few months, the fun of Pokkén Tournament has been showcased in incredible competition courtesy of the Pokkén Tournament Championship Series. We've seen amazing victories, breathtaking comebacks, and more than a few surprises along the way.

While the developers did their best to craft a balanced platform for fans to enjoy, the real test came when Pokkén Tournament was put through the rigors of high-level play. And like most competitive titles, dedicated players broke down the game and dissected each and every bit of its mechanics to truly learn what makes it tick.

As such, the time has come for Pokkén Tournament's first major update. Earlier this year, the developers pushed out a patch to address a glitch that stood to make Shadow Mewtwo a competitive powerhouse, but now every main Pokémon and a handful of supports are set to receive tweaks in an effort to ensure Pokkén Tournament has the best chance to remain balanced heading into the future.

First up are changes to Lucario. The full animation on Lucario's Burst Attack can no longer be interrupted by a Support Pokémon, allowing players to get maximum damage off this super move on a more consistent basis. The other two adjustments are an increase of damage scaling on Lucario's Bone Rush downward swing follow up, as well as a decrease in guard damage for its charged forward strong attack, which means it won't be as reliable a tool for guard breaking as it previously was.

The iconic Pikachu also received a couple of small changes. The first increases the amount of time Volt Tackle can counter moves, giving players the opportunity to absorb more damage before unleashing a counter attack. The second change increases recovery on Nuzzle, should you miss out on grabbing the opponent. With these changes, Pikachu's mix-up game weakens slightly, but the cute and electrifying Pokémon now has a better chance of dealing with being rushed down.

Both Machamp and Gardevoir were hit with only one change apiece. Opponents who block the former's low stance strong attack will now recover faster than before, so any block strings you had in your back pocket will likely need to be adjusted after this change goes into effect. The latter, on the other hand, has seen an increase in speed on its backward weak attack projectile, making it a much more potent zoning tool.

Weavile's Icicle Crash to Signal Slash technique, which doesn't do any damage, but does boost the Support Gauge, has seen a decrease in recovery time. This makes it a bit safer to use when you're looking to get an edge on your opponent in the field. Taunt to Night Slash, however, no longer has full invincibility after the first repetition, so tricking the opposing Pokémon will only go so far before becoming dangerous.

Although Suicune is considered a zoning Pokémon, its changes have to do with improving its combos and alleviating some of the pressure it can put on defending opponents with its zoning. First, its weak to strong combo now pushes the opponent back farther, making it easier for Suicune to splat them against the wall and follow up with the strong attack. Additionally, its midair weak attack projectile doesn't keep a guarding opponent in block stun as long as before, allowing it to inch closer between water blasts.

Charizard received a decent boost to its Air Slash attack, which is performed while flying. The attack's hitbox is now larger, making it useful in more situations and fixing some situations in which it wouldn't combo on specific Pokémon. Also, its Synergy Burst has been shortened, so it's imperative that all you Charizard users out there get your damage in quickly before leaving the powered-up state.

The tricky Pokémon Gengar has received just one adjustment. That being said, it's definitely useful. Much like the improvement to Charizard's Air Slash mentioned above, Gengar's Shadow Punch has seen a hitbox increase, allowing it to land attacks and combos that may not have been possible previously.

In order to allow Blaziken a chance to close the gap on zoning opponents, the fiery Pokémon's midair weak attack now nullifies a number of Ranged Attacks. Its low stance weak attack has also had its recovery reduced, giving Blaziken a chance at new combos. Also, its Burst Attack no longer causes Guard Break, making straight up defense a legitimate option for opposing Pokémon.

Pikachu Libre is perhaps the most interesting Pokémon in Pokkén Tournament's cast, as it eschews the regular Pikachu's moveset in favor of more acrobatic and theatrical attacks. While the length of its Synergy Burst has been reduced, alongside increased damage scaling on its high stance weak attack, Pikachu Libre now has a much more consistent evasion tool in its low stance weak attack. If you've been having trouble with getting around high-hitting moves, this should greatly increase Pikachu Libre's maneuverability.

We've seen a number of Sceptile win early tournaments in the Pokkén Tournament Championship Series, but only a couple of changes have been made to the Pokémon in the latest update. Moving forward, the growth following Sceptile's Bullet Seed will occur much sooner, and its strong attack is no longer as threatening in Guard Break situations.

While many of the changes so far have been incremental, Chandelure is where things start to get a little more extensive. Apart from fixing issues with Minimize, the Pokémon's side Ranged Attack has seen a considerable speed decrease, making it a much less potent zoning tool than before. Additionally, Chandelure's backward strong attack has seen a damage increase. Finally, the pose it strikes after a charged strong attack now decreases the time of a negative effect on itself and further increases the time opponents are inflicted with debilitating statuses.

Braixen has seen a considerable decrease to the amount of guard damage its Fire Spin, backward Ranged Attack, and Burst Attack deal to the opposing player. That said, its Burst Attack can no longer be interrupted by Support Pokémon after the initial hit. Braixen has also had new combo avenues open up off its strong attack, and Flame Charge can more easily avoid low attacks. The boost received from Sunny Day has been adjusted after dashing, and a glitch that allowed players to jump during a Sunny Day boost after using Light Screen has been removed.

Garchomp has also seen a couple of repairs. The first deals with its Burst Attack, which no longer needs to be blocked up to the third hit, but deals increased block stun. The second ensures that weak attacks combo into Dig on opponents in Synergy Burst. The rest of its changes are all buffs: Stone Edge's counter now activates much quicker; its regular counter's hit box has been raised to better catch midair opponents; its backward strong attack now deals more block stun; and the invulnerability period of its low stance strong to high attacks has been increased.

Finally, we get to Mewtwo and Shadow Mewtwo. These Legendary Pokémon have been known to dominate a player or two in competition, but the following changes do a lot to balance their tools when matched against other members of the cast.

Starting off with Mewtwo, the powerful Pokémon has seen a number of diminishments. These include a decrease in the invincibility of a missed Burst Attack. There's also been an increase in the amount of Synergy Gauge its Pokémon moves consume, a delay in Barrier's counter timing, a decrease in the reach of its forward Ranged Attack, and a decrease in the number of Homing Attack hits for easier countering.

Fortunately, it's not all bad news for you Mewtwo players out there. A glitch that caused a decrease in the Synergy Gauge when a player pressed back plus counter attack has been fixed, and Mewtwo now gains more Synergy Gauge with a successful Drain Punch.

The tweaks given to Shadow Mewtwo, on the other hand, are much more balanced. Some of the more prominent changes include: making Recover safer; the ability to combo off Thunder when it hits midair opponents; faster recovery on its backward dash in the field; an increase in the amount of health Miracle Eye consumes (which makes cancels a more risky proposition); and a decrease in the duration of its Synergy Burst.

The most involved changes came to Shadow Mewtwo's Psywave: vortex. On top of eating up more HP, the move also deals decreased block damage. That said, delaying the vortex after activating Psywave will allow Shadow Mewtwo to move much sooner than a blocking opponent, which should afford more opportunities for mix-ups and other tricky situations.

While it can be hard to see your favorite Pokémon lose tools you relied on before, most of these changes are important if you want to see Pokkén Tournament survive as a competitive and balanced title. Playing to win is all about adapting to ever-changing scenarios. With all these improvements, now is the perfect time to jump back into the game, experience what's been adjusted for yourself, and get ready for the next battle.

13 January, 2014 by rawmeatcowboy | Comments: 0
- features the Sinbad arc and Magnostadt arc from the anime
- play through a parallel world story where you can create your own party
- this mode has original conversations between characters
- action RPG where you can bring three different characters into a dungeon
- Aladdin, Alibaba, Morgiana, Hakuryuu Ren, Titus Alexius, Yamraiha, Sharrkan, Mu Alexius, and Ithnan are included
- features support characters such as Drakon, Pisti or Spartos
- hits Japan on February 13

Tekken: A Man Called X live-action movie in the works

12 January, 2014 by rawmeatcowboy | Comments: 0
- will be a prequel to the 2010 Tekken movie
- stars Kane Kosugi as the movie's main character 'X'
- will begin filming later this month
- this is Kosugi’s first lead role in a Hollywood feature
- Prachya Pinkaew (Ong Bak) may be directing

09 January, 2014 by rawmeatcowboy | Comments: 0
Not surprisingly, Namco Bandai has plans to continue the Super Robot Wars franchise. They have filed a new trademark for Super Robot Wars Tengoku Hen, although we don't know what platforms it will launch on. We'll keep an eye out for new info.