A comic adventure introducing Johnny Rocket in an action platformer game stylized as a free-hand black and white cartoon.

Wallachia: Reign of Dracula - another round of gameplay

Move objects to the designated platform and balance, arrange, and build to help earthlings complete jobs! Tasks range from farming, fishing, and stacking cheerleaders. Wait…what? Each puzzling job has multiple objectives hinted at through pictures. Solve them to earn in-game medals and unlock even more jobs—just keep an eye on the timer.

The Last Blade: Beyond the Destiny - more gameplay 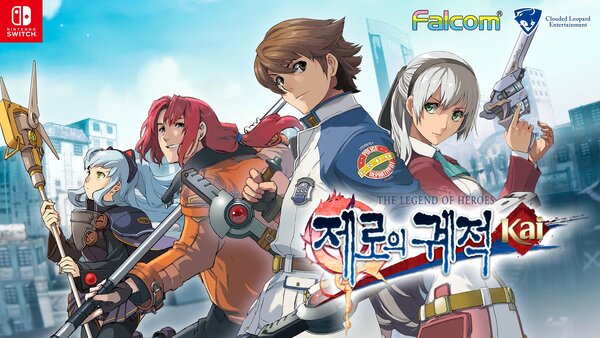 The Outbreak series just had its second installment hit Switch the other week, and now the third title is coming in hot. Outbreak: The Nightmare Chronicles launches on Nov. 5th, 2020, and you can get full details on the title below.

Following the recent release of Outbreak: Epidemic on Switch, Outbreak: The Nightmare Chronicles – the third game in the Outbreak series – will arrive on Nintendo’s portable console next Thursday, November 5.

Outbreak: The Nightmare Chronicles pays homage to the classic Resident Evil trilogy while adding a smidge of Silent Hill to the mix. The result is a unique single-player experience featuring bone-crushing difficulty, limited saves via consumable floppy disks, and panic-inducing encounters NOT for the faint of heart.

Featuring fixed camera angles – a staple of the survivor horror genre since Alone in the Dark – Outbreak: The Nightmare Chronicles is the most atmospheric title in the Outbreak series – taking players from a well-lit, stately manor (creepy in its own right!) to a nightmarish environment far below ground.

The Switch version of Outbreak: The Nightmare Chronicles carries over improvements and bug fixes made to the original Steam release, including:

Outbreak: The Nightmare Chronicles is available for pre-order now and will be released on the Nintendo Switch a week from today, Thursday, November 5, for $11.04 (15% off). On November 12, the game will return to its original MSRP of $12.99.

The worlds of soccer and Pokemon collide again
29 October, 2020 by rawmeatcowboy | Comments: 0

Time for season 2 of Pokémon Futsal! Don't have any idea what that means? Check out the press release below for full details.

The Pokémon Company International and The Football Association (The FA) today launched the second season of Pokémon Futsal, to continue to provide participation opportunities and help younger players develop their football skills.

Building on the success of the opening year of the partnership, the second season will see The FA and Pokémon work closely using their shared values of evolution and progression through training to showcase the benefits that participation in Futsal can have on youth football development.

The FA and Pokémon have released a fun and engaging launch video today, featuring England Senior Men’s players Raheem Sterling and Tammy Abraham, kid Youtuber Tekkerz Kid and football legends Joe Cole and Rachel Yankey, all showcasing their skill with Pokémon’s limited edition Futsal balls, as well as a special appearance from England Senior Men’s Manager Gareth Southgate. The content brings to life the latest season of Pokémon Futsal, encouraging all kids to ‘train like a master’ and continue to learn and evolve their Futsal skills, whatever their level.

The launch video also encourages kids and parents to visit mastertheball.com and learn more about the FA Pokémon Youth Futsal programme, with the option to find participating clubs that are taking part in the FA Pokémon Youth Cup. Not only are these participating clubs able to get hold of the Pokémon kit bundle packs, as showcased in the video, but they can also receive a limited-edition Pikachu Futsal Pokémon Trading Card.

Coming soon, Pokémon will be releasing further exciting content on the mastertheball.com website, including brand new training videos to help kids to continue to develop their game, and an exclusive piece of content, ‘Master Your Skill’, being revealed later this month that encourages kids to showcase their skills!

The FA and Pokémon will continue to work closely together throughout the second season by creating exciting, standout initiatives to engage kids and coaches at participating clubs up and down the country, culminating in the 2020/21 FA Pokémon Youth Cup, targeted at participating Futsal clubs later next year.

The popular 3DS franchise makes its jump to Switch! Crazy BMX World is coming to Switch on November 5th, 2020, and it packs in all sorts of content. Get the full breakdown in the press release below.

The Japanese hit series, Crazy BMX, introduces its best package yet! With over 2,700,000 players, Crazy BMX is one of the most popular runner-style games in Japan. Now, at long last, it makes its way to the West with all of the content released on 3DS in a single package. World Tour, Galaxy Tour, and Time Rider are now available on Nintendo Switch for the very first time, featuring a staggering 295 courses! Tour the world, travel through space, and go back in time all on your crazy bike!

Visit major cities around the globe in the World Tour, the stars and planets of the Milky Way in the Galaxy Tour, and time periods inhabited by dinosaurs, pirates, and samurai in Time Rider!

The more you play, the more bikes you’ll unlock! Each one shares a common trait: they’re absolutely absurd. Tired of the same old bike? Then try jumping over obstacles with a pizza or cup of coffee on your head! Collect them all to show everyone just how crazy of a rider you are!

When the going gets tough, the tough use resurrection capsules!

As you get further into the game, the difficulty will grow more and more demanding, but don’t raise the white flag just yet! There are several bikes with resurrection capsules, which allow you to retry from a previous point in the course, hopefully far from danger! Use them wisely to overcome whatever may lie ahead!

Compete with friends for the best score in Grand Prix mode!

Challenge other players from your country using the account linked to your Nintendo Network ID. Use your favorite bikes from your collection to seize the high score and show everyone who’s boss! 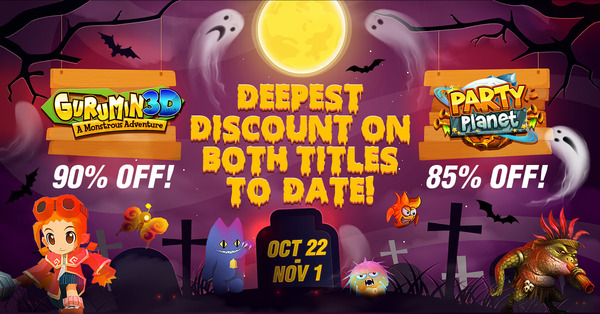 Everyone's out to save a few bucks, right? Perhaps you can save some of your hard-earned cash with an eShop sale from Mastiff. The company is running a limited-time sale on two titles, and you can get the details on both below.

Join Parin and her lovable monsters pals as they set out to save Tiese Town and Monster Village from the evil phantoms in the highly-acclaimed action-RPG, Gurumin 3D: A Monstrous Adventure.

Gurumin 3D is 90% OFF on the Nintendo eShop for the Nintendo 3DS during Mastiff's Shocktacular Halloween Sale.

Anyone, regardless of age or skill level, will have a blast playing the 30 mini-games included in Party Planet...18 of which can be played with up to 4 players for some friendly cooperative or competitive play. Turn any location into a party!

Party Planet is a walloping 85% OFF on the Nintendo eShop for Nintendo Switch during Mastiff's Shocktacular Halloween Sale.