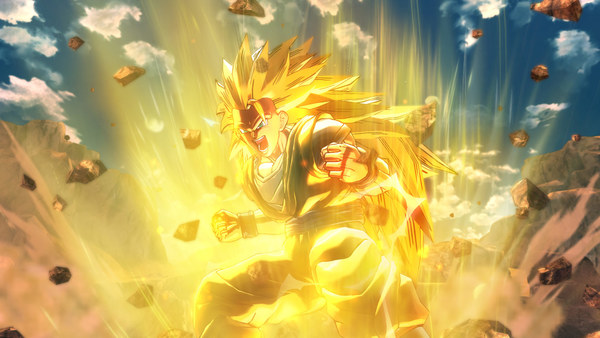 Kewl. Then we get WarriorZ too! Thanks Banco!

Late tho, which means even if we get it, it won't sell big numbers.

400K out of 3.3 million isn't exactly a lot though.That's barely more than 10%, and it remains to be seen if that trend will continue in time, because it might be all that they're ever going to sell for all we know.

It sold loads better on the other platforms. That was my point. Now if FighterZ had come day one on all consoles including Switch, THEN we could compare and say whether it sold good on switch compared to other platforms, as THAT is what will determine future support. PS4 for example gets pretty much everything, and on time too, because that's where everything typically sells best. FighterZ won't sell nearly as good on Switch because most potential buyers will have bought it on another format already, that's the reproach I was making. The Wii U has many reasons as to why it failed and not getting games on the same day as the other systems was an important factor in that. Granted the Switch still manages to sell more copies even with late arrivals but still that is NOT a desirable situation for the future. We need more same day releases is all I'm saying, for devs to really start taking it seriously.

My first comment was a semi-joke, but let's get all serious here.

The thing is that it sold OK for an old port. Actually it's pretty decent for an old port, specially with many Nintendo games already out on the system. BN are coming out saying they will support the Switch more from seeing it's success and their games doing well on it. IF it's easy to port Z to Switch then it can also sell perhaps some 400000. Maybe even more since it's not several years old. If the announce it, people might wait for the NS version.

Apart from that I totally agree with you. No late ports. Or at least not as many. But seems like that's the way they are heading.

Not as late as Xenoverse 2 technically is now, and X2 shipped 400k,

You don't know that. You dont know how late FighterZ is going to come to Switch, in fact it's already out elsewhere and for all we know, development hasn't even started on FighterZ Switch, IF and only IF it will even ever come since all that was ever said about it coming to Switch, a month or two ago was, quote from Tomoki Hiroki :

"In regards to the Switch version, we couldn't really say about the situation, however, what we do know is we would like our Switch users to focus on our first Switch title: Dragon Ball Xenoverse 2.

After the release of Xenoverse 2 on Switch, then we will start to consider whether we should have Dragon Ball FighterZ on Switch."

So according to him, development wouldn't even have started until AFTER Xeno 2 was released on Switch, IF it was to happen. The game is out now, and the Switch version if it exists may have only just started development. Porting a game to a less powerful platform and having it optimised enough that it is in any state you should wish to be able to play it as isn't something that can be achieved in six months. Could take a year, by which point for all we know there will be another super hot DBZ game already out on other systems.

Now having said all that, it sounds likely, now that Bannam has said they regretted not having developed more games for it sooner, that most of their hot games that have the potential to still run and look great on Switch will come to it, including FighterZ. But from what we DO know, development on it can't be too far along.

I don't see what's so hard to grasp when it comes to this. This article explains that even old(er) ports can sell on Switch. I am pretty sure Doom is going to do pretty good, even if it is only 30 FPS. And it's not exactl the newest game. And another thing is if Namco are so eager to get more games out on Switch, and have some obvious experience so far with porting, they can port faster than ever.

Doom sales already look promising going off the small anecdotal evidence scattered across the internet. One can say more are excited for that than Skyrim.

Even with that, BoI is years old and is selling impressively. In fact, a lot pf Nicalis support has been well received.

Unsure about Skyrim thoug. Personally will not get it and from what I read, plenty agree. It's been out on pretty much everything. Doom on the other hand, from what I read, seems to be off on a good start. I'll be downloading it tomorrow myself (but my math exam is in 2 weeks, so I might have to watch it hehe).. I have yet to get Xenoverse, dammit!

Disgea and Nights of Azure is also waiting. The list is long.

I have to admit though, that the motion controls for Skyrim do look intriguing to a motion fan like me.

Anyway: Back to the point: I see no reason why we shouldn't see WarriorZ announced for Switch from the headlines the last week or two. Japanese third parties are all over the Switch now.

Don't get me wrong, I don't doubt Warrior Z is coming. It was pretty much in the card the moment Namco underestimated Xeno2 dales potential in Japan.

Ayeh. Another I should be getting..

Well, obviously not everyone thinks WarriorZ is coming to Switch...

Good, now maybe we can actually get FighterZ.

I'm surprised it's sold this well, honestly. A port of a game that's been out for over a year on three other systems, heavily discounted on them and on a NEW system? Dang. Good on you, DBZ fans. Hopefully we get FighterZ.

Thinking I might get this for $20 on Black Friday. Any reason not to?

Not really, there's also a free update coming out with a new figure fighting mode and more character DLCs and a supposed expansion.