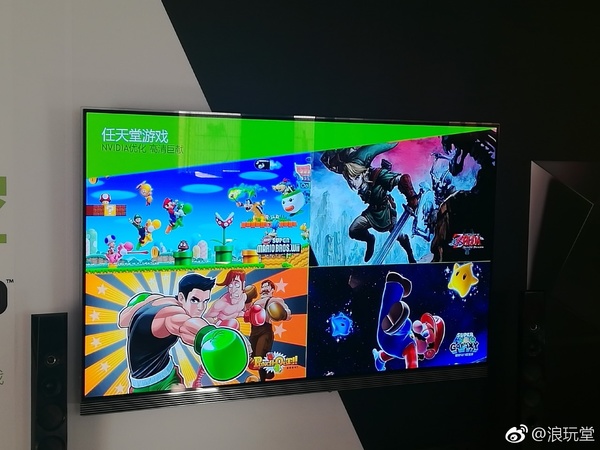 Way back in January, we reported a rumor Nvidia and Nintendo teaming up to bring some games to the Nvidia Shield. Today we see that rumor confirmed.

At an event held today, it was confirmed that New Super Mario Bros. Wii, Punch-Out!!, The Legend of Zelda: Twilight Princes and Super Mario Galaxy are on the way. These games will be optimized for the platform. As of right now, these plans are for China only.

Nvidia is ready to bomb some Dodongos.

Daaaang! Hopefully this is a sign of HD remasters heading to the Switch too.

That is what I find so interesting about this. The Switch basically uses the same Tegra chip as the Nvidia Shield TV.

I wonder how tough it was to port these games.

Edit: So people are saying that these aren't ports but are being emulated. If that is true, then it bodes very well for GameCube VC on Switch!

The real question is if these versions will be leaving China. It would be really strange to see Nintendo games suddenly advertied on my Shield TV.

I'm digging the fact that Nvidia and Nintendo are enjoying a strong partnership though.

The Panasonic Q was kinda the same. A Panasonic system to play GameCube games. And the iQue Player for the Nintendo 64 for china. I think Nintendo did stuff like that also for the NES.

But how will be the games playable? Games like Punch Out! and Super Mario Galaxy need the Wii Remote in a important way.

Official Wii games on the tegra processor. I wonder how they preform.

Nvidia is ready to bomb some Dodongos.

This is a shocker, surreal to say the least. Here is hoping that we're also going to get these titles on the switch.

This is such an odd hint for Nintendo to do. Why put their games on a non-Nintendo? I guess there is precedence with the iQue player. But even that was all Nintendo focused

i feel like the next new versions of switches are gonna be a nice upgrade. i love the nvidia partner ship but now if only some of these shield games ported over to the switch.

China is a unique marketplace so I wouldn’t worry about this.

"Unique marketplace" is a nice description for "making foreign companies jump through hoops while allowing your own companies to ignore patents and copyright and allowing your citizens to pirate".

In all seriousness, I don't know what to feel here. Now people can start waiting for Nintendo to go third party while purposefully pirating their games.....

These are releases tailored for the chinese market, like the iQue versions of 64 games (i.e F-Zero X with online), and their purpose is to raise IP awareness on China.
They're not a factor on what will come or not to the Switch.

Until they see the pirate rate.... Nobody buys media in China, well official licensed media...

Interesting. Since the ban has been lifted, game consoles have struggled to sell in china (legally of course). This may be a good way to re-introduce Nintendo to the chinese mainstream.