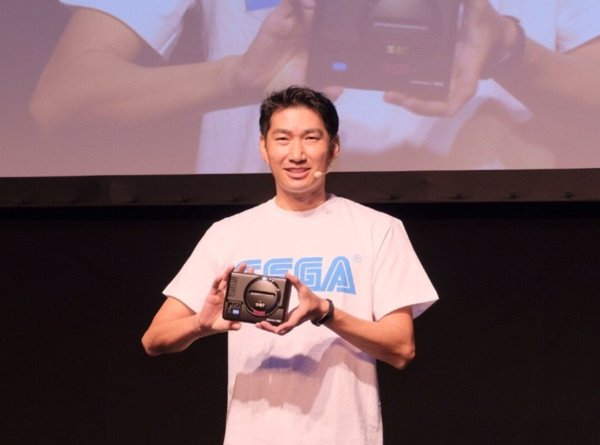 Hmmm...where have I seen this idea before?! SEGA has confirmed that they'll be releasing a SEGA Mini sometime this year. SEGA didn't reveal what will be included on the hardware, but it'll likely be along the lines of what we've seen on the NES and SNES Classic. The device is being created by AtGames Flashback Zone.

How much you want to bet It will have Sonic 1-3 but not Sonic and Knuckles?

I am pretty sure is the same one from AT Games. It just hasn't been released in japan before

EDIT: Never mind, I hate to say this but you are sadly right.

Yeah, the ATGames one is bigger. That one, judging by its size in the hands of the guy in the pic, would never be able to receive the original cartridges.

with the same old tired sega games we can get anywhere.

Hopefully a serious proposition unlike that At Games junk

The Sega Megadrive/Genesis flashback already exists, this is a blatant cash in on the success of the NES/SNES mini, And I find it funny that Sega is releasing a copy of a Nintendo product that launched after their own similar product.

Yeah I'm pretty sure that the equivalent of an emulation device already exist for the Sega Genesis. More importantly it's gotten more prominent at local Meijer and similar big box stores because they're all sold out of NES and SNES Minis. As such this feels like someone announcing a special release of a cherry Jolly Rancher. I mean sure everyone likes Cherry Jolly Ranchers but it's not like they didn't exist before

If it's the one by AT Games, isn't that one really terrible when it actually comes to emtulation. Clover and Canoe aren't perfect, but they work well enough to make you think you're playing on actual hardware at least. From what I know, the AT Games consoles all have bad audio and frame rate issues.

The difference between the NES/SNES mini and the AtGames products is not just the appearance faithfully reproducing the original system but the quality of the actual hardware and emulation software itself.

If this is a honest to god effort I could consider supporting it, but it could easily be just a repackaged AtGames.

Jesus SEGA there's only so many times you can resell Genesis games before people get tired of it. You literally JUST announced a Genesis collection for PS4/Xbox One and you had one for PS3/360. Wii Virtual Console (though you can no longer buy games on it) Not to mention I can walk to the Family Dollar down the street and pick up one of the many plug n play systems for like $20. Let's be honest here most people who buy these Genesis collections only care about the original Sonic games and you can get those in the following:

I just wish SEGA would stop milking their genesis titles and start you know making NEW games in franchises OR at least milk the dreamcast more than Genesis. I get sad just thinking about all the franchises SEGA has that they do NOTHING with. Super Monkey Ball, Billy Hatcher, Samba De Amigo, Nights, House of the Dead, Streets of Rage, Crazy Taxi, Echo the Dolphin, Space Channel, Ristar, Golden Axe, Virtua Fighter, Alex Kidd, etc. Granted Wii got a few of these franchises but that was 10 years ago...

Don't forget Sonic Jam on the Saturn! So yeah, Sega's been re-selling the Genesis Sonic games since the very first system after the Genesis. :P

Though, in all fairness, Jam was also the first time they added the spindash to Sonic 1. Plus, it had that neat museum world to run around.

Nobody is forcing you to buy this. And those cheap plug plug n play systems for $20 have horrible hardware and sub-par emulation.

I'll keep my eye on this but I think I will be REALLY excited when they announce the Saturn Mini.

As original as their Sonic movie that was announced six months after the Mario movie but comes out a year before.

If it has ToeJam and Earl and Zombies Ate My Neighbors, I’m there

The console that will remind you the Sega used to have other series besides Sonic, but don’t matter now because it isn’t Sonic.

Yeah well. We have had tons of these unofficially for years now, some of them pretty convincing. Especially the Megadrive. Guess I'll be waiting for the Dreamcast mini then. We all know what happened in between.

Sega clinging on nostalgia is more jarring that nintendo´s, i mean, sega didnt really do it until sonic unleashed with the 2d stages kinda, and nintendo do it all the time with the NSMBs games and some other games, but now, nintendo has released very original and suber games, meanwhile sega believed everyone loves classic sonic to dead, begin to pander to that audience from sonic 4 and fowards, and it seem they arent going to stope because...it sells

I have never played a single Sonic Game, Demos aside, not have I played really any olc Sega title. So I'll probably pick this one up. I hope Mini Consoles becomes a common thing for everyone. Imagine a Mini N46, Mini PS1, Mini Xbox, Mini GameBoy Micro!

that means...nothing given the fact that the market is filled with these AT games crap.

Wait for money to come

Don't fuck it up Sega.

The market is so flooded with Sega clone products already and the reputation of these products is so bad... how are Sega going to position themselves in a market that they, themselves, have allowed to be overflooded with crap Genesis stuff already that's being advertised and sold as the exact same products that this thing right there also is, even if it was going to be loads better? The average consumer who would buy it just for the nostalgia factor isn't going to be able to tell the difference when they walk into your average supermarket, see one on shelf, and ask to buy it. I've seen those crap third party clones (ATGames and BLAZE products mostly) on shelves in general stores for years with little to no mention on them that it wasn't Sega themselves putting them out so the public at large would not know at first glance, buy one, and then be massively disappointed in every way.

And here I thought people bashed at Nintendo for not being original.

Nah. I dont liked Genesis games at all. SNES Mini EUROPE version was the best console and best games so far. Sorry, Sega. No thanks.

So there is a good chance the Genesis might beat the SNES after all. There were only about 20 games on the SNES mini, now if Sega goes all out, like the complete Sega Genesis collection, they might actually have the better 16-bit console to give in the end :P