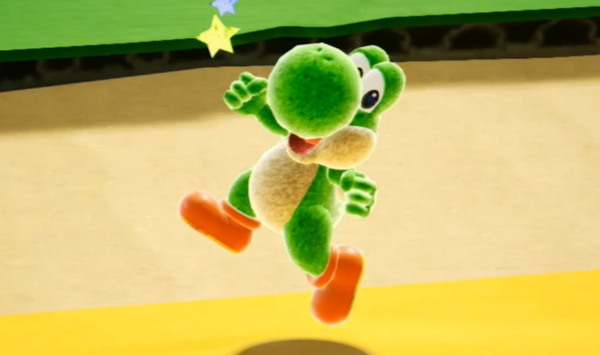 Yoshi Switch wasn't part of Nintendo's E3 2018 showcase, and we know that the game has been pushed back to 2019. Should we start to worry about the title? In an IGN interview, Nintendo's Bill Trinen says things are going quite well for the game.

"It's actually been making really good progress. They decided they wanted to make some improvements, so they're going to take just a little bit more time on it and that's why we're not showing it this year at the show, but I think you can look forward to some updates on it later in 2018."

I thought Wooly World was the first Yoshi game in a long time to be on par with Yoshi's Island in terms of quality and enjoyability.
As long as this this game is on par with those games I'm fine with a bit of a delay.

We better..I don't want this to turn into another Woolly World situation..

Hopefully it gets a bit more difficulty, it had really nice co op design which allowed for a lot of shortcuts and stuff like that, but the general difficulty wasnt high (except for a certain mole on a extra level).
Heard the yoshis island speedrunners didnt like something with throwing during the movement, so a slight speed up could make it a really cool co op speedrun game!

That said, Woolly world was the game that got me to buy a Amiibo, the 2 characters 1 controller gameplay is in waaay to few games not to get it! Played through it like that a few times, and besides having to reactivate it on each level, only the final boss crashed during it (first time ive seen a nintendo platformer crash).

The only amiibo I have were pack-in! Those being Woolly Yoshi, 8-bit Mario and Wolf Link & Midna.

I absolutely loved Yoshi's Woolly World, it surprised me by its quality, it's almost a forgotten gem. Everything about it, was just sublime. I'm really looking forward to this new game, it's made by the same developers, Good-Feel, so it will be terrific.

With the lack of it's presence at E3, I just figured they came up with some idea that set back progress by a significant amount of time. Like some Nintendo Labo integration.

Still so bummed about this delay. I hope it was truly due to improvements and not development problems.

It was playable last year (and looked gorgeous af), so I doubt it’s development issues. Nintendo has a history of sitting on finished games just to release on a window that’s a bit light. Heck, Fire Emblem Three Houses was already dubbed in English, which is a good indicator of how far they are with that (especially compared to Xenoblade 2 Torna, whose E3 trailer wasn’t).

Aside from their bigger focuses (Pokémon Let’s Go and Smash Ult), I think they’re allowing third parties to fill out their lineup instead of competing with them.

I thought Wooly World was the first Yoshi game in a long time to be on par with Yoshi's Island in terms of quality and enjoyability.
As long as this this game is on par with those games I'm fine with a bit of a delay.

Agreed. It felt like Wooly World took forever just like this game, but it was well worth the wait to get, IMO, the first and ONLY Yoshi game that could be considered a worthwhile "sequel" to Yoshi's Island.

Nintendo's "craftwork" games are all some of my top 10 favorites on their respective systems, so I will happily wait for this one so it can be its best.

A delayed game will almost always turn out good.

I'm excited to hear about the update later this year. Another Direct sounds fun.

There is a bit of a contradiction there. If they had made "Really good progress" it would have released this year as they intended it to. It's just PR gumph.