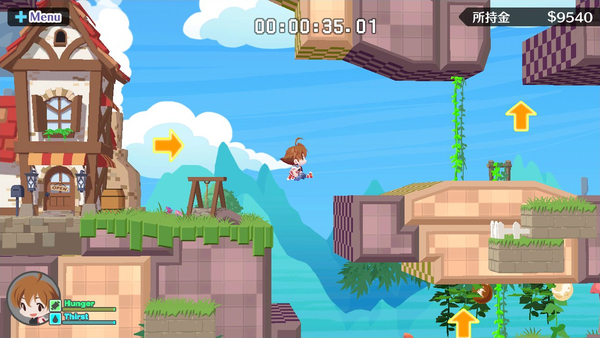 Behold, the first screen for Umihara Kawase Fresh!, which is slated to hit Switch in Japan in 2019. Success Corp. shared the screen via Twitter, as they did details on the Metroidvania style of the game, the control scheme, and dev studio/character designer. We've already covered those details, but here are some finer points we haven't shared yet.

- right now the game is a Switch exclusive, but it might end up hitting other platforms later
- if that does happen, the Switch version will still see roughly half a year of exclusivity
- if you choose a quest without a time limit, you can go to any area of the map without having cleared the quest
- the higher you go up and the lower you go down, the more the image of the world will change
- multiple difficulty options
- has multiple playable characters, including a new character
- the new character was one of the only things Success Corporation asked the development team for this time
- her identity is still a secret, and she will not be revealed at Tokyo Game Show 2018
- there will be a story and event scenes