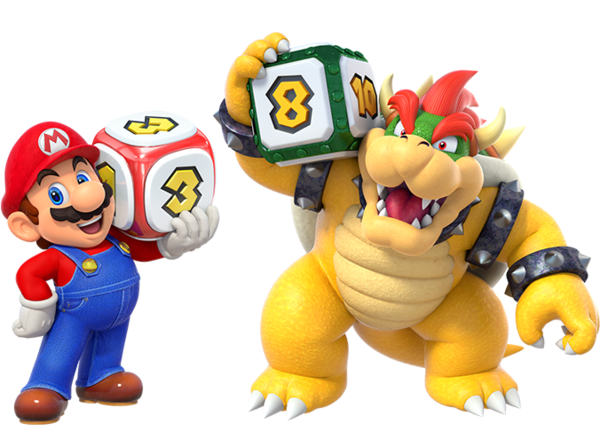 According to the German website for Super Mario Party, the game is set to include just four game boards. Those boards are Whomp's Domino Ruins, King Bob-omb's Powder-keg Mine, Megafruit Paradise, and a mystery board, which we believe to be Golden Kingdom. The website specifically says 4 game boards, so it seems that will indeed be the total. I'm sure people were looking for more than that, but hopefully these boards are quite expansive.

If you want to see official footage of the first three boards named, you can check out the clips below.

Mario Party 5 had seven game boards, and that was over a decade ago... That, combined with mandatory gimmick controls (meaning no handheld mode play, despite the fact that they could have easily made a button minigame category and made that the only option in portable) doesn't give me much hope for this game. Megafruit and the Mine boards look great, but Whomp looks like a linear borefest. Hopefully that last board is nice, big and varied to make it fun. The Space level in Mario Party 5 was always my favorite.

Geez, and to think I thought they were on the right track due to the huge character roster... But it seems they put in more characters than boards or even minigames. (the fact we haven't heard of a concrete total, or at least the amount without shaking worries me) And where the hell did the Orbs go?

This has to be a mistake, right? Well, no, it's Mario Party. Look how crumby the last game was on Wii U. We keep thinking, the next game, this will be the one that brings pride back to the series, but, alas.

Honestly,Super Mario Party looks like it has taken more inspiration from Wii Party than Mario Party

I wouldn't be shocked if this is true, but I'm also waiting on Nintendo to announce the Star Cube, so unless its NoA, I wouldn't trust a global Nintendo division until NCL, NoA, or the general NoE confirms it.

Sadly, it seems that Nintendo Germany is right. The information about the 4 boards is also present on the French, Spanish, Italian, Dutch, Portuguese and Russian sites of Super Mario Party. The number is only omitted from the English site, but even the English site only shows four game boards.

Also, I would like to mention that there is no German division of Nintendo. The headquarters of Nintendo of Europe is located in Germany and they double as Nintendo's German devision. The German Nintendo site is called Nintendo Deutschland, but all official Nintendo sites in Europe are monitored by NOE. If you ever see an article which mentions Nintendo Germany, you're most likely dealing with actual information from NOE.

Oh yeah I forgot NoE was based in Germany, I'd say this is probably true information. But people seem to be liking the game, so I don't know if this is that huge of an issue. More boards for the main mode would have been nice, but 4 is still a decent amount, and there are other modes

(Plus this is a great opportunity to add another game with free DLC, in the form of new boards and minigames, since Armus finished up last year and Splatoon 2 just finished as well)

All multiplayer ones yes
Singleplayer, not so much. BoTW didn't, FE Warriors didn't, Xenoblade didn't, and Mario Odyssey's barely counts as DLC.
But Mario Party is multiplayer so your point still works.

What a shock. Nintendo somehow makes Mario Party worse than the last game

It really isn't though.. It's got lots of cool modes of which one is actual real classic Mario Party.

So this will Nintendo's biggest DLC party, eh?