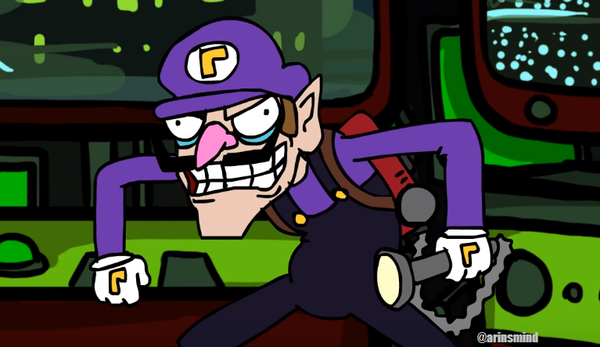 Nintendo's Kensuke Tanabe is a fan of Luigi, and he wants to see the guy overtake Mario as far as popularity. In an interview with Game Informer, Tanabe talks about his love of Luigi, the idea of Waluigi's Mansion, and the potential for Wayoshi.

GI: Would you like to see Luigi in more games?

KT: I would love to see Luigi get to a point where he rivals Mario. I'm constantly pestering Nintendo with ideas for how to bring out Luigi more to make him surpass Mario. I like Luigi more. I kind of prefer a flawed human compared to this superstar hero.

GI: How do you feel about Waluigi then?

KT: Waluigi is something that I’m not in charge of, so that’s hard to say. Are you saying that Waluigi and Luigi should team up? He tends to appear in games where Wario appears. I guess we'd have to make a Waluigi mansion for that.

GI: I know we’re off track, but since there is a Wario and a Waluigi, is there also a Wayoshi? Has there ever been talks in the office of making a Wayoshi?

KT: Yoshi himself is everything, so I don’t know what that would be like. Maybe his eyes would be like meaner or something. Maybe he would eat stuff and then just spit it out entirely whole. Or would he would be like Birdo because Birdo shoot eggs from her mouth? Is Birdo Wayoshi? Maybe.

Boshi is not canon

And YES - we need a Waluigi game - YES an egg-vomiting edgy Wayoshi would be fun - and yes REVIVE WAPEACH!

No you. You're not canon.

That image made me read the headline as Tanabe liking Waluigi more than Mario, and I was ready to call for his retirement.

Ah, sure why stop there? How's about Weachi and Woadi?

Or would he would be like Birdo because Birdo shoot eggs from her mouth? Is Birdo Wayoshi? Maybe.

Do we know Waluigi looks for treasure also? It's weird he doesn't appear in the Wario Ware games.

I also think they haven't come with a way to reinvent or shakeup the formula.

Also Wario Master of Disguise failing. (Whenever a Nintendo game fails hard it does get shelved for quite some time).

This is an insult to Boshi

I demand to have Waluigis Mansion now

For some reason it feels he should have a Casino. Like the one in Isle Delfino.

Yeah that might fit better. I'm sure you could find Wario in Waluigis casino

Make Super Mario RPG canon - hell, give it the Link's Awakening treatment on Switch. Boshi must be a Smash skin one day.

Funny how his first thought was to team Waluigi and Luigi up, or make a Waluigi's Mansion. I have always figured the obvious way to go was to make Waluigi an enemy or rival for Luigi - even involving him in the Luigi's Mansion games in this way.

I miss the days of Wario Land, and of Mario having to teach Wario a lesson.

You know what? Wario needs to be in Super Mario RPG 2. Imagine that!