The one where we talk about dirty dogs
25 October, 2020 by rawmeatcowboy | Comments: 6 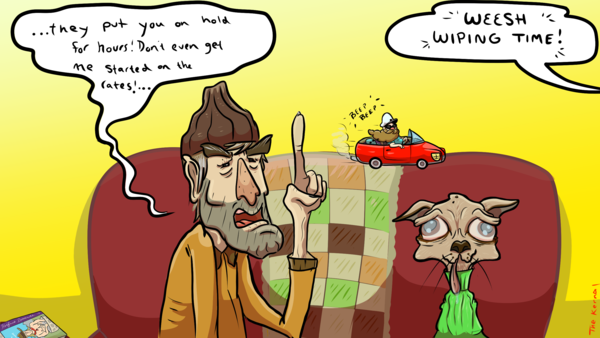 Thanks to @KrazyKernal for the awesome artwork!

There's some big Nintendo stuff to talk about this week! New sales records, crazy analyst talk, limited edition releases, and much more! Of course, we throw in random discussion as well. It wouldn't be the GN podcast if it didn't go off track!

Aww, thanks! I was partially inspired by Amanda Flagg's mother 3 inspired "frog in a car" art.. but i didnt want to bite her style completely!

Excellent artwork. A lot going on. Jason stowing away in the back of the car. The old dog with cataracts. The magazine in the bottom lefthand corner. I can't make out the first word.

Now, you could say Nick is making a mountain out of a molehill. Figuratively and fashionably, look at his hat.

Thank you! Its impossible to see but i had Jason doing a "shh" motion... when i work in miniature i forget a lot gets lost but at least i know its there! This one had a lot.. i wanted to throw Pachter in because i had sketched him out for a different idea but, alas, time is fleeting. And the book is a Harlequin style romance novel about Cowboys and steel drums, referenced during the music section.. it was too ludicrous not to include!

This was such a fun, ridiculous episode that started on that foot. When i listened back to it to flesh out my doodle i didnt realize Nick Hills "phone moan" (ha!) was within the first 5 minutes!

And wowzers! That is a bigbrained nicky hill theory that i hadn't thought about but now.. its so obvious! 😁

Jesus the “beep beep” clip made me laugh so much. Extra good show this week.