Word on the street
by rawmeatcowboy
15 December 2020
GoNintendoGN Version 5.0 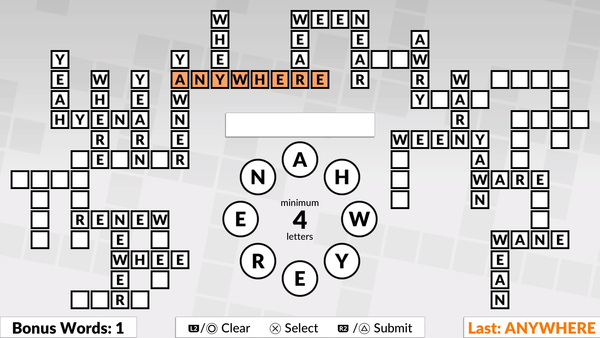 Lightwood Games has released yet another word game for Switch. Roundout by POWGI is up for grabs, and you can read about the unique twists this game offers below.

Lightwood Games is thrilled to announce the release of a new word puzzle game, the fourteenth instalment of the popular “by POWGI” series.

Roundout by POWGI is out on Tuesday 15th December on PlayStation, followed by Xbox on Wednesday 16th and Nintendo Switch on Monday 21st.
Roundout is a mash-up of two other puzzles, Word Wheel and Kriss Kross.

A twist on a traditional letter scrambling puzzle, this game places the words you find into a crossword-style grid. The more overlapping words you find, the more clues you get towards discovering the remaining words.

Anagram puzzles are often open-ended, challenging you to “find as many words as you can”. By contrast, Roundout provides satisfaction by giving players a clearly defined - and achievable - goal to work towards.

Each puzzle is generated from the letters in an 8-letter word, making it quick and intuitive to play with a controller stick. Nintendo Switch also supports touch screen play in handheld mode.

It’s a casual puzzler in Lightwood’s usual no-fluff style, intended to get your brain ticking in moments between more intense gaming sessions, Roundout by POWGI has also been tested and confirmed to work on PlayStation 5 and Xbox Series X|S.