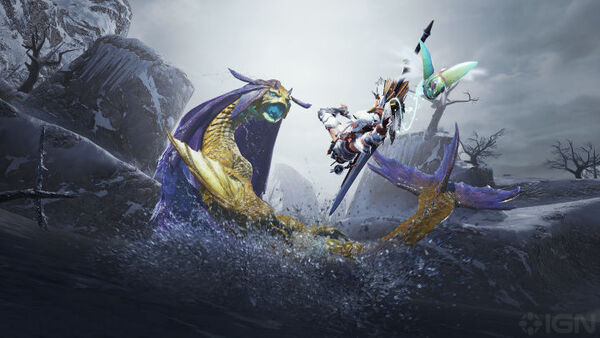 Ichinose reveals that development of Monster Hunter Rise started before Monster Hunter World launched, and it was being worked on by a completely different team. That team had planned to go the more standard route for Monster Hunter games, which meant having areas that were separated by loading screens. Ichinose explains how this approach changed as development went on.

“On the Nintendo Switch, we thought it would be difficult to preserve visual quality and detail in a sandbox environment. However, as development progressed we started realizing that open environments had become more and more the norm for blockbuster titles, and the success of World inspired us to take on the challenge.”

Are Capcom forgetting that they asked Nintendo for Switch specs to be improved prior to launch? Which they were, and it seems like they're saying it still wasn't enough. But that they've taken on the challenge. And as Switch sales improved, they may have felt that if they put some real effort in and looking at how World was developing, they could get a bigger Switch audience this way. Rather than what sounded like more of the same in previous games, initially. It will be interesting to compare sales of Rise to Generations Ultimate.

Yeah, never liked this demo that much. This Wire Bug bit is unnecessary and mounting seems complicated and useless. Perhaps I’m missing something but most of what they added in is killing the game for me.

Respectfully, have you even played Monster Hunter before?

Mounting works exactly like how it always did since MH4U. Except wirebug attacks contribute mount damage also.

Wirebug is amazing. It's a gamechanger and adds a whole new dimension of mobility.

Sounds like you just don't understand what you're doing, and need to learn the mechanics.

Try giving it another chance, it can be overwhelming at first (as every single monster hunter game, except for world which I have never played and probably never will, specially now that Rise is coming) but once you get the hangs of the mechanics you'll probably see it differently. The wire bug is incredible, it adds so much to combat system, making special attacks, avoiding certain attacks, getting to safer areas to heal or shoot with range weapons, it really adds up. Also, there are so many QOL improvements, just to mention the automatic item combination which works really well, in previous games you would just carry lots of potions and that's it, sometimes I never used them all and if ran out of greater potions I would simply use common potions instead of looking for honey, as it's really tedious to get items. In this game looking for items feels more natural and fast, like you can really get something useful by exploring in between battles.
Anyway, hope you give it another chance, the demo really impressed me and I'm a die hard classic MH fan.