Nearly 20 years later, this is still an unforgettable moment 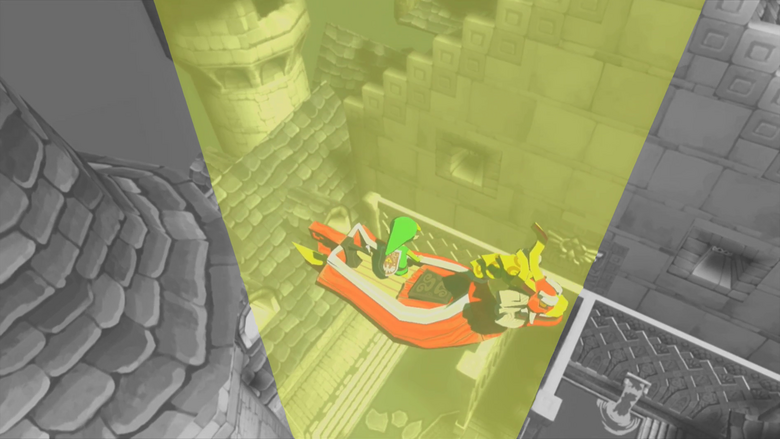 The Legend of Zelda: The Wind Waker has come a long way since its initial release. Originally reviled by some fans for its cel-shaded look, it’s often hailed as a classic today. Luckily, many of us didn’t take twenty years to appreciate its beautiful, fluid art style. Not only was Wind Waker a masterful example of atmosphere and immersion back in 2002, it’s aged better than other, more realistically-modeled games of its day. The HD re-release of Wind Waker on the Wii U in 2013 proved that this world needed very little polish to hold its own against newer titles. The seafaring adventure, sweeping music and expressive character animations all add up to make this an unforgettable experience, standing out even in a series as prolific as Zelda.

Entire articles could be written about any number of sequences from Wind Waker; the endlessly explorable Windfall Island, the shocking climactic ending, or even the vast ocean itself. Those are all well and good, but the scene that has stuck in my mind all these years later involves sailing beneath the ocean and discovering the forgotten majesty of Hyrule Castle. 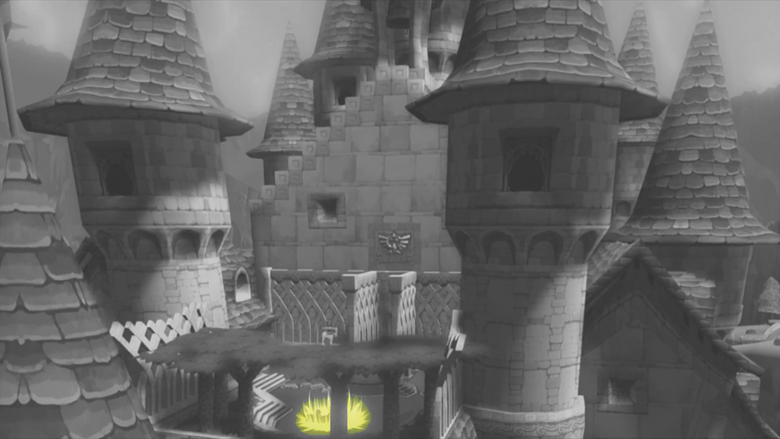 Hyrule Castle is a time-honored staple of the Zelda franchise, appearing in nearly every single entry. In Breath of the Wild, it’s big enough to be its own intricate and punishing multi-level dungeon. In other games, it functions more as a key story location; a place to meet Princess Zelda when you need her. Wind Waker uses the castle as a way of centering the story at a key point, reframing the player’s conceptions of the world, and emphasizing just how effective its use of color, space, and sound can be.

The majority of your time playing Wind Waker is spent sailing and exploring above the sea. With the exception of some fishing trips, the game isn’t too keen on showing you what’s beneath the waves. That is, until you discover Hyrule Castle. In a breathtaking cut-scene, Link descends on his trusty boat (The King of Red Lions) into the depths to discover an entire castle hidden underwater. This reveal opens up the world of Wind Waker in a way that most players weren’t prepared for. If Hyrule Castle lies underneath the water, who knows what else could be waiting there? Ultimately, the game doesn’t really explore this premise, but the implication of a larger world hiding just out of reach is enough to send imaginations skyrocketing. 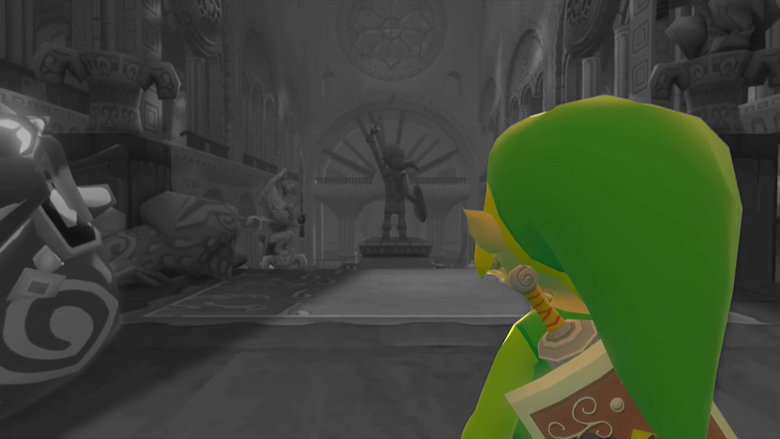 If the discovery of Hyrule Castle is exciting, actually entering its walls is awe-inspiring. To emphasize the fact that this is a past version of the structure that’s been lost to history, the entire location is literally frozen in time. In a striking contrast to the rest of Wind Waker’s bold, beautiful world, your first exposure to Hyrule Castle is cold, stark, and colorless. Link is a splotch of green and yellow amidst a sea of black and white architecture. Even the enemies are greyscale and frozen in place, though seemingly ready to come alive at any moment. There is a great sense of foreboding all throughout this place. Walking through, one feels the need to step softly and carefully, as if it were a library or a museum full of fragile artifacts. It exudes power and importance. In a word, it feels legendary. 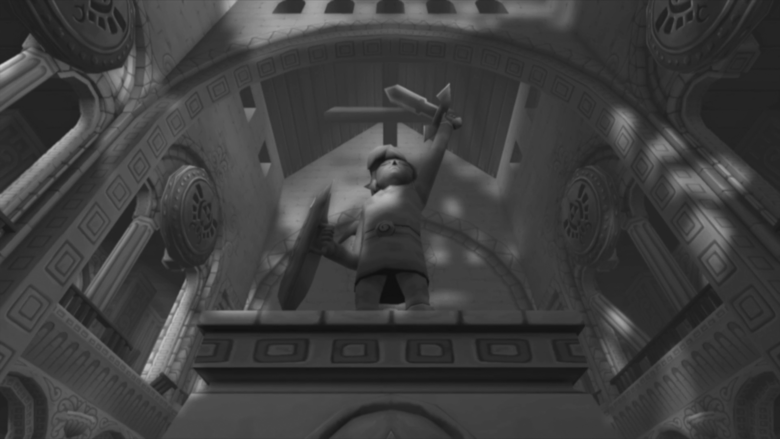 If you examine the walls of the castle, you’ll find a few key clues to its past. First, some family portraits of Princess Zelda and the King of Hyrule, whom you’ve met already (whether you know it or not). That said, the most important and fascinating piece of history comes in the form of a statue at the center of the castle. This statue depicts a legendary hero with his sword held high. He is, in fact, Link, but not this era’s Link. This is Link, the hero of time from The Legend of Zelda: Ocarina of Time. Just in case there was any doubt as to exactly which Link was being depicted, a stained glass display in the castle basement illuminates things further. Darunia, Ruto, Saria, and the other sages from Ocarina of Time are intricately carved into the stained glass windows. What could be a mere easter egg feels like something more than that. It comes across as a genuine connection to another world. 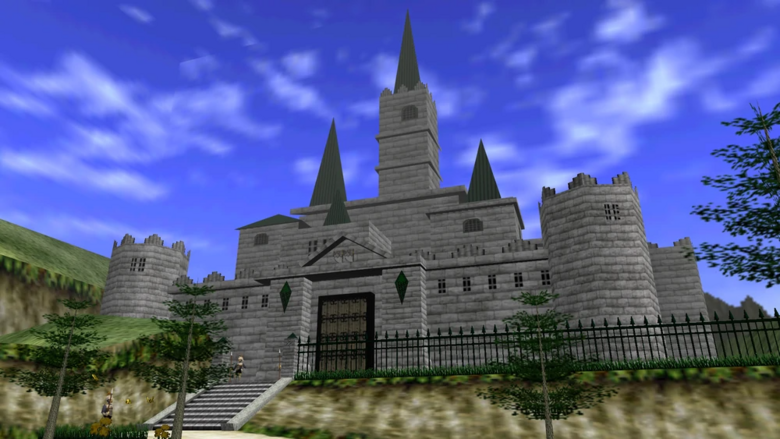 For most gamers who were alive in the 90s, the version of Hyrule Castle that appeared in Ocarina of Time was the most impactful. It was our first time getting to see the legendary location implemented in three dimensions, but it still wasn’t fully explorable. For the most part, Ocarina sees you sneaking along the outskirts of the castle, catching glimpses of its halls through windows via the courtyard. More important than the castle itself was the overall impact that Ocarina of Time left on an entire generation of gamers.

Wind Waker acts as a distant sequel to Ocarina of Time, taking place hundreds of years after that world has been flooded. This connection to Ocarina is part of what makes Wind Waker’s Hyrule Castle experience so special. With a few notable exceptions, most Zelda games do little to acknowledge their predecessors. Wind Waker, on the other hand, is a game that reveres its past. Its absorbing opening cutscene retells Hyrule’s history and teaches us that the legend of a hero in a green tunic is widely known in this world. With this introduction, Wind Waker’s Link becomes more of an avatar for the player than he has ever been before. This Link aspires to the great and heroic deeds of legends past, just as we do. It’s a subtle twist that nonetheless makes a huge difference. Upon discovering that shrine to Ocarina of Time’s characters and history, one imagines that Link feels the same sense of awe and wonder that we do as players. Moreover, this wasn’t just a lived-in world; this was a world that the player had more than likely lived in themselves. This was a connection to our own nostalgic pasts, executed in a way that no other medium could truly replicate. 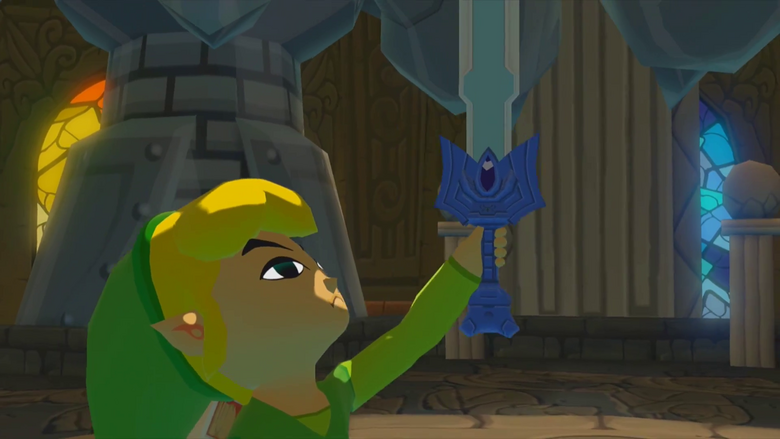 The actual puzzle required of you upon entering Hyrule Castle isn’t lengthy or complicated. Move a few blocks into position and you’ll be rewarded with access to the hidden chamber, where of course you’ll receive the coveted Master Sword. All in all, you could get in and out of the castle within five minutes or less. Personally, I took my time before going down that passage during my first playthrough, opting instead to pace the frozen halls; my footsteps echoing off the high vaulted ceilings, wondering what life was like here before the fall. In fact, I was so taken with the atmosphere, I was almost a little disappointed when the castle’s color and vitality were finally restored. This too is a key part of the experience, however. 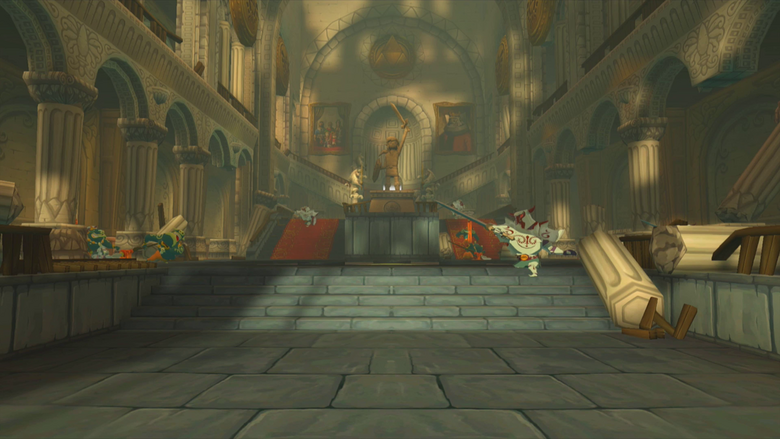 Upon first entering, you’re an unseen visitor in a forgotten realm. When leaving, you feel like you’ve actually been transported to the living past. Active moblin and darknut guards await you for a fun bout of slashing and weapon-stealing. The newly restored red carpets and polished floor tiles are just as ripe for exploration as you marvel at the differences between then and now. This contrast is essential, and the second half of the sequence is no less thrilling than the first. 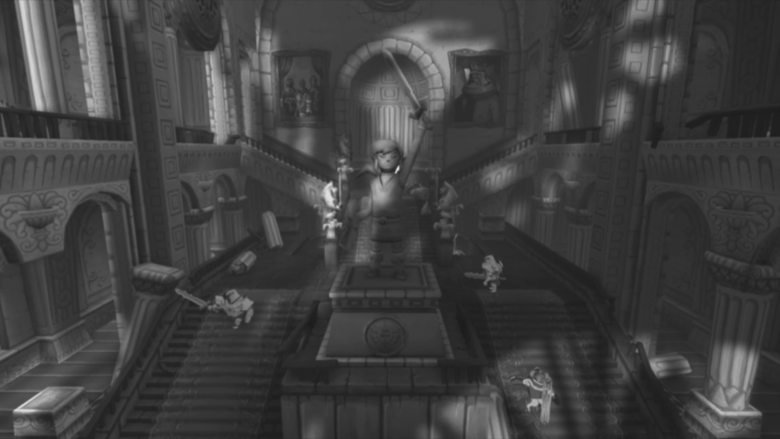 Most Zelda games adhere to the series’ successful formula, and that formula almost always includes Link attaining the Master Sword. There’s some stiff competition in this franchise, but for my rupees, no other version of this sequence leaves as lasting an impression as Wind Waker’s. It’s a moment that feels impactful and revelatory without being bombastic or overblown. It offers a moment of quiet reflection in what is otherwise a raucous, joyous adventure game, before returning you to the action with style. Its brevity contributes to its power, too, with the moment never overstaying its welcome. The game gives you just enough to feel the weight of this place and its grand history before sending you on your way again. It’s a great bit of restraint, and an example of just how brilliant Eiji Aunoma and the rest of Nintendo’s development team can be.

Unfortunately, the HD re-release of Wind Waker altered the castle’s color palette, reducing some of its impact, but there’s still plenty there to appreciate. With any luck, Nintendo will make some version of the game available on the Switch before too long. If you do pick the game up again for a new playthrough, take some time to linger in Hyrule Castle’s halls and consider its value. It’s an adventure worth revisiting.