Edge of Eternity Review - A love letter with some typos

"Fate dictated that you would come."

What are you willing to sacrifice?

The Nintendo Switch has become a home for great role-playing games, from original adventures to remastered classics. Using cloud technology, Edge of Eternity has entered the fray, and it’s aiming to offer something for RPG newcomers and veterans alike. While there are places the team aimed too high and fell short, there’s no denying the amount of love poured into this game. 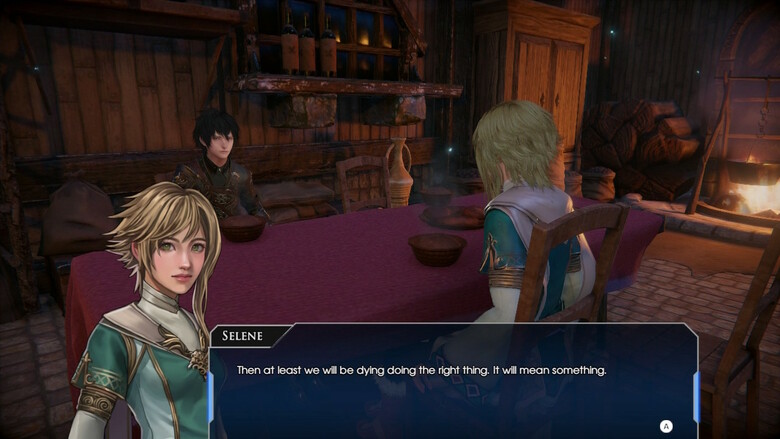 Selene is willing to sacrifice everything.

In this turn-based experience, we follow the story of Selene and her brother Daryon as they attempt to find a cure for their mother’s illness. The two sacrifice quite a bit as they traverse a world ravaged by war, with the planet’s inhabitants and an alien force constantly battling for supremacy. This premise threads the needle by providing originality, while also indulging in a few genre tropes.

In particular, the dev team loves to poke fun at the RPG tropes they’ve also embraced. For example, when a character spots the gigantic sword that Daryon carries, they ask how it’s even possible for him to wield the thing! A bit later in the game, your party members wonder if they should bother with fetch quests when time is short, and question how bosses always show up at the end of a stage. These are welcome interactions that provide laughs in the middle of an otherwise serious quest. 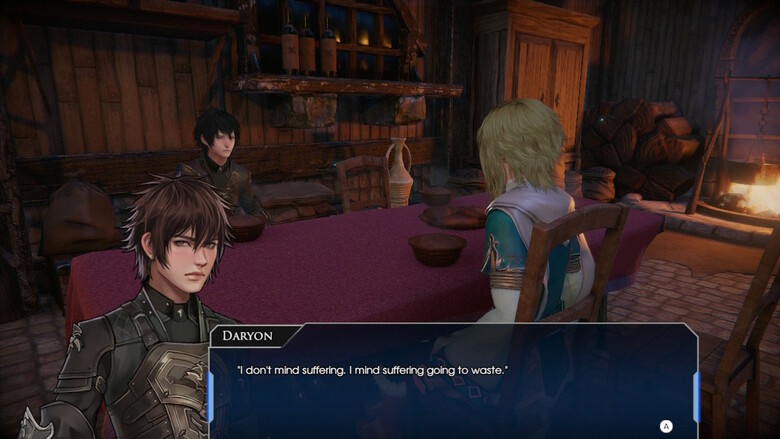 Daryon is very, very serious about his quest.

As you make your way through Edge of Eternity, you’ll likely notice that a handful of characters are fairly unlikeable. Daryon is the main culprit, and it seems the developers aimed to elicit this reaction from players. As the story advances, we learn about Daryon’s background and what makes him somewhat off-putting. Once you learn these details, Daryon’s personality becomes quite realistic, even if some players would rather have a traditionally heroic protagonist. Other characters, like Daryon’s mother, are written similarly, but the latter half of the game provides personalities that differ significantly, yet are still well-written. 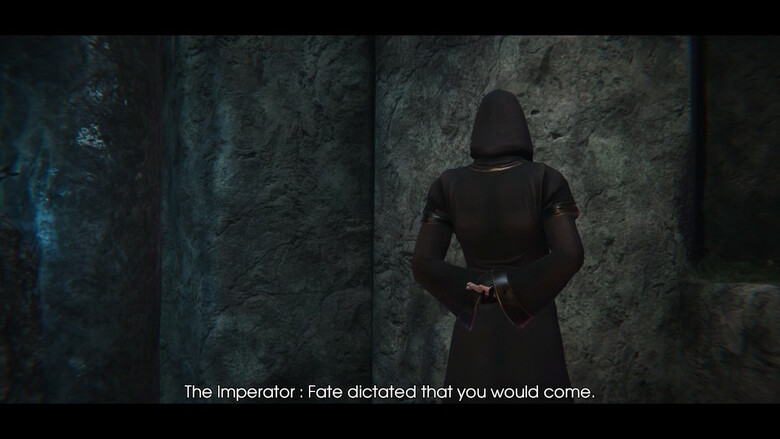 The writing for Edge of Eternity’s overall story is a bit different, as elements can be pretty unclear at times. Some of the best RPGs and visual novels begin with a confusing story that slowly unravels its mystery, but Edge of Eternity doesn’t provide enough breadcrumbs to explain things or pull you along. This lack of clarity hurts the experience measurably. At one point, you control an unknown character and are forced into making a choice without knowing the motivating question. I hated the consequences of my decision, which caused me considerable frustration. It created a moment of disconnect in the experience that I struggled to rebound from. 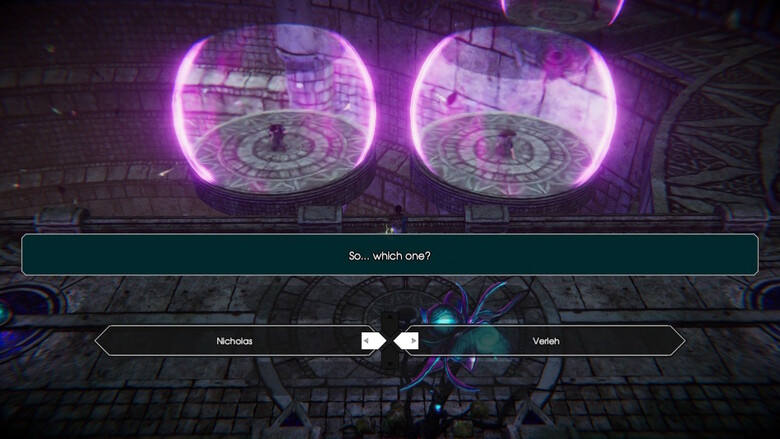 I was so confused...

Nonetheless, while the story is lacking at times, combat makes up for it. Enemies are visible on the field, and by touching one, the game transitions to a turn-based battle on a hexagonal grid. In general, battles marry Edge of Eternity’s JRPG influences with more Western RPG hallmarks. Not only does weather affect the battle, but also terrain, since some hexagons implement elements that can impact the characters close by. Certain crystals, for example, improve defence or enhance your elemental attacks, while bombs can be activated to cause damage. Positioning becomes very important, since back attacks hurt more, and characters occupying the same hexagon can share a spell’s effect. 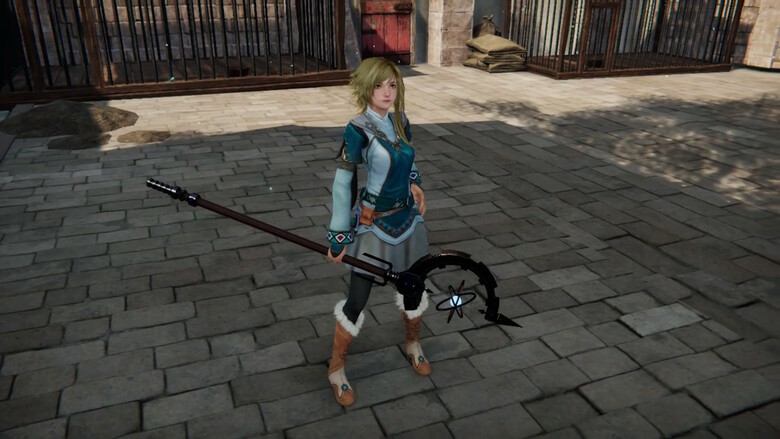 Seeing the victory screen was very satisfying after a hard-fought battle.

You can use your turn to move, attack, use an item, or flee, and the order is determined by a bar that fills up over time. Edge of Eternity tracks time while the bar is loading, and the faster you win, the better your spoils. There’s also optional objectives to strive for during battle, and these can result in a better payout of money or crystals. Crystals in particular are fundamental to your success.

Every weapon has slots of different colors, and by placing a matching crystal into a slot, you’re granted stat bonuses or character-specific spells. You can remove crystals as well, so experimenting to find the best combination is encouraged. Tinkering around with crystal combinations is very fun, as every weapon has multiple customizable paths, but you can only use one path at a time. You can eventually access more slots and paths by using a weapon in battle and leveling it up. 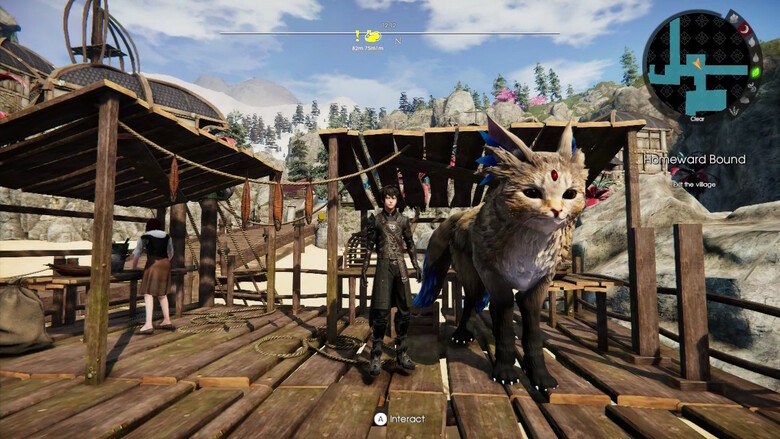 A friend who will help you gather items.

Certain items help you to craft and upgrade weapons, armor, and consumables. Also, more powerful crystals can be created by combining weaker ones. Sometimes finding the right combinations of crafted elements and crystals can be just what you need to power through the next battle. 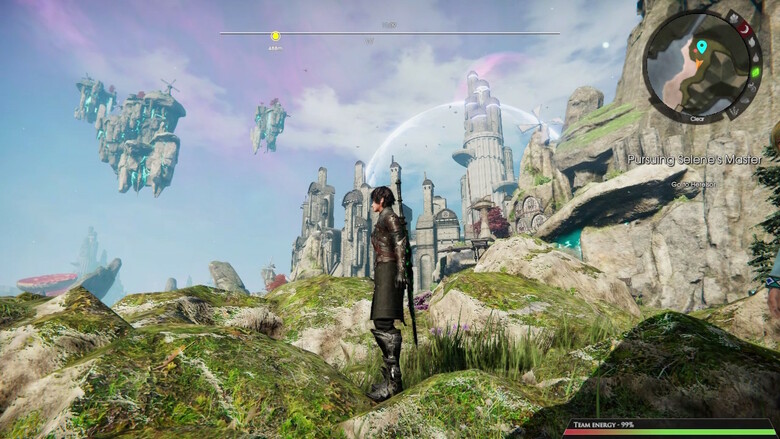 A vast world to explore.

Just as combat helps lessen the sting of the story’s failings, so does exploration. The world of Edge of Eternity is enormous, and loading screens are a rare occurrence, which is definitely commendable. You can travel these vast expanses quickly by riding a nekaroo, which is a cute, cat-like creature that makes your journey considerably more fun. It doesn’t hurt that the vistas you happen upon while traveling are breathtaking, and the accompanying music helps to heighten the atmosphere. The only downside is the empty nature of these plots of lands. While cities are alive and populated, the open areas feel noticeably vacant. This seems to be something many modern games suffer from; environments that are expansive and beautiful, but lack life. 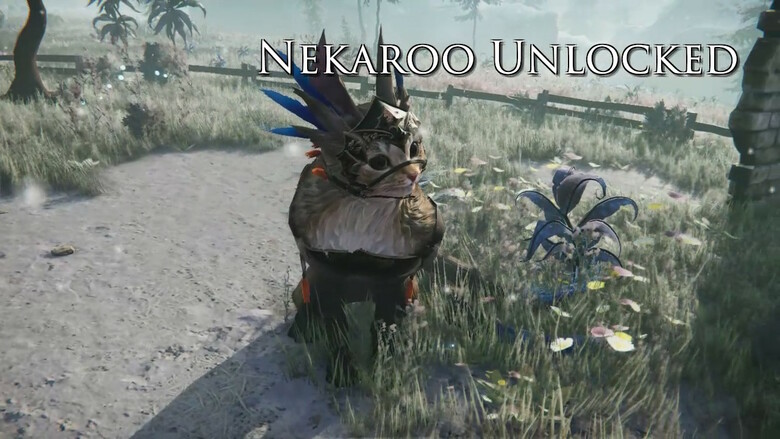 One of the best moments of the game!

While you’re out and about in these barren lands, you can take on a decent amount of side-quests. Some side-quests are puzzles, which were a highlight for me. Other quests teach you the game’s lore, and share details on the characters inhabiting the world. Quests are dished out via quest boards in most cities, and you can track them by activating a quest marker. Although a useful way to level up and gain rewards, some of these excursions can be boring, with even the main characters complaining about their “fetch quest” nature. 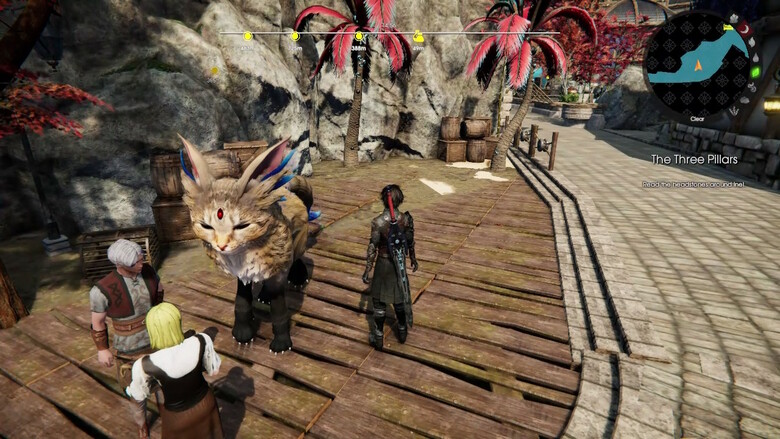 On the right you can see your current side-quest.

If you’re looking to learn more about your party members, you can do so via conversations at inns. From time to time, you’ll receive notifications about new conversations unlocking, which lets you know it’s time to head to the inn for a chat. While there, you can also eat various foods that improve your stats proportional to how full your energy bar is. This bar depletes as you cast spells, which decreases your bonuses, so it’s a good idea to enjoy a meal when you can. 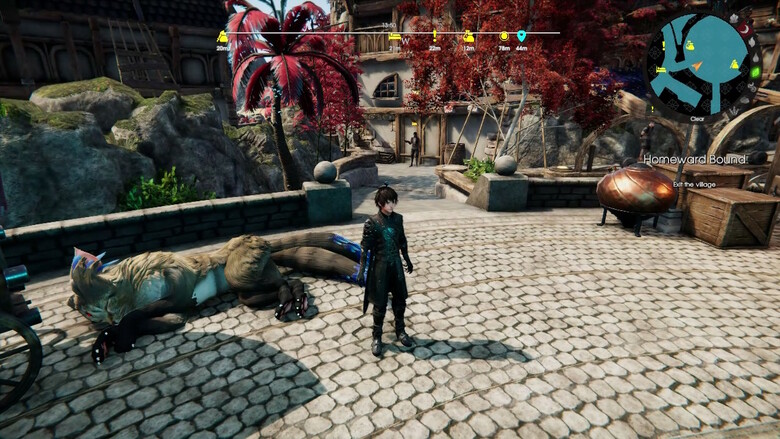 Nekaroos can't sleep in the inn, but they seem comfortable taking a nap outside.

Learning about party members through chats is a great way to glean more details in Edge of Eternity, but sometimes the game imparts with info long before you should know it. The game’s User Interface can be a tad wonky, revealing names of mystery characters before you should know them. That is, if you can read the font at all. With the exception of subtitles for cut-scenes, Edge of Eternity’s font is quite small and hard to read. This goes for both docked and handheld play. 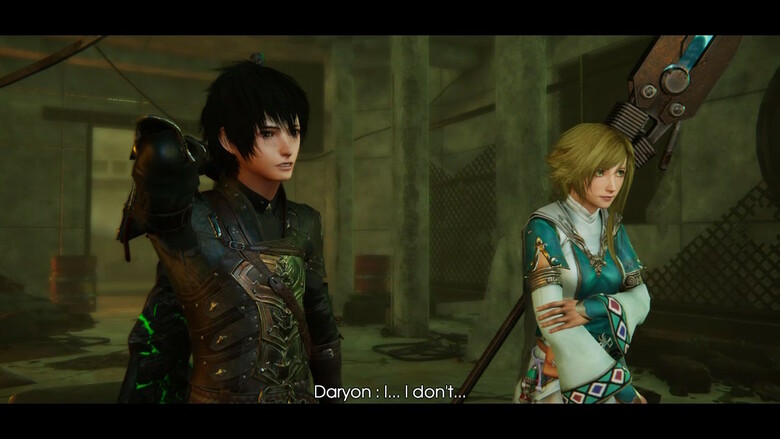 Another minor problem with the UI pops up when putting crystals in weapons. Some crystal colors are too similar to one another, which will no doubt cause problems for anyone with color-blindness. With some trial and error you can figure things out, but this problem could have been easily fixed by adding a unique symbol alongside each color (as seen in Puzzle Quest).

Even though font size and colors can be an issue, Edge of Eternity does have many noteworthy accessibility options and quality of life features. Subtitles can be made larger, difficulty is fully customizable, puzzles can be skipped without penalty if failed, you can save anywhere, and most impressively, level synchronization. Level synchronization eliminates the need to grind if you are underleveled, as it automatically adjusts your level to be slightly higher than the enemies you happen upon, including bosses. Similarly, you can do the same for enemies. 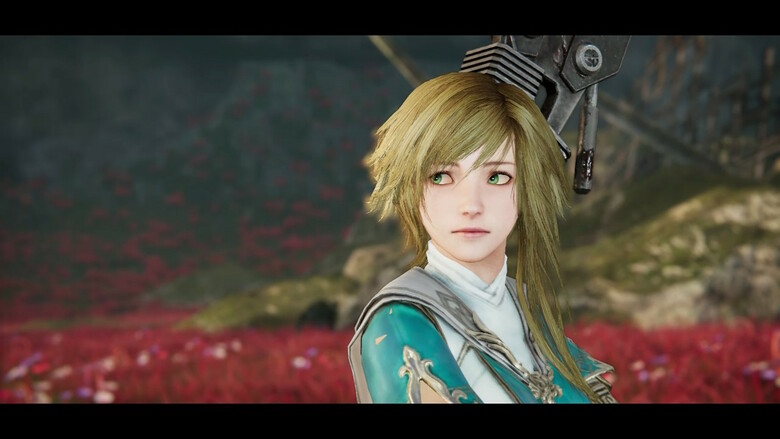 Cutscenes were quite well done.

As mentioned earlier, Edge of Eternity on Switch utilizes cloud technology, meaning you’ll need a constant internet connection to play. I tested the game with both wired and wireless internet, and the results were great either way. With my strong internet connection, the game only stuttered during three or four gameplay moments and cut-scenes.

While a smooth experience most of the time, there were moments when the cloud aspect led to hiccups. For example, whenever I died in battle, the game would lose connection or freeze completely, forcing me to restart. I didn’t consider this a big issue personally, but it’s certainly worth pointing out. There were other instances where the game would become unresponsive when changing equipment, but leaving the menu and coming back fixed the problem. Lastly, other one-off problems were distorted faces during a cut-scene, and dialogue that repeated after a cut-scene ended. 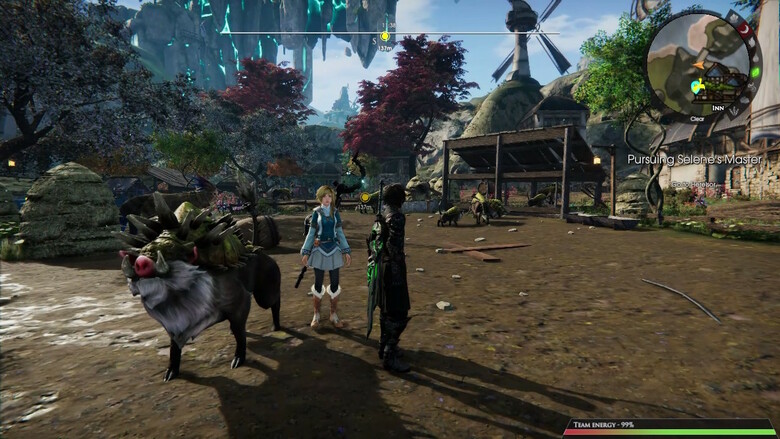 Back: a nekaroo. Front: not a nekaroo (but still cute in its own way).

All in all, Edge of Eternity is brimming with passion and love, as reflected in beautiful fields and cities, some memorable characters, an interesting battle system, a great soundtrack, and lots of attention to detail with accessibility. Regrettably, the game is also held back by a confusing story, some unlikable (although realistic) characters, and at least in the Switch cloud version, minor technical issues. Overall, I enjoyed my time with the game, mostly the second half, and am happy that the experience can be greatly customized, opening this daunting genre to a wider audience.