WHAT AN IDEAL NIGHT TO HAVE A CURSE. ⛈ 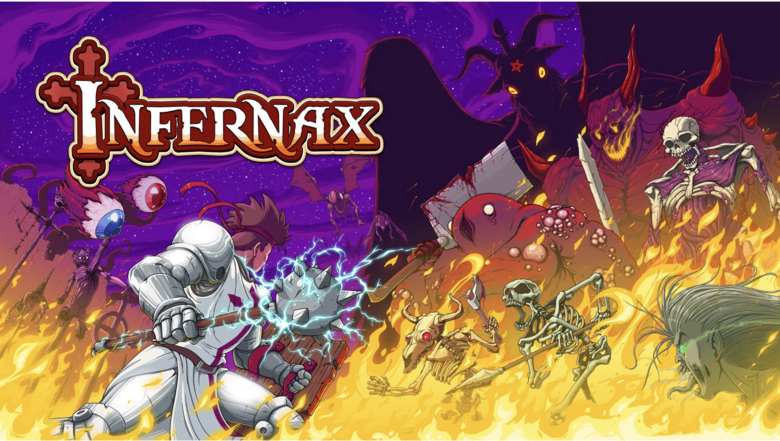 Some video games are easily described as “love letters” to their source material. Infernax goes beyond this, and is closer to a “call to arms” for players who even remotely enjoy NES-inspired Metroidvanias, and more specifically, Castlevania II: Simon’s Quest. Infernax is the modern realization of a violent exploration through oppressive towns, towers, and the countryside that connects them. This retro romp is as gory as it is difficult, expressive as it is opaque, and every bloody bit of fun it looks.

Infernax is rooted in tradition; a non-linear action RPG platformer, complete with crisp, crunchy pixels and a silent, testosterone-charged protagonist. As you journey from village to village, you’ll tackle a variety of sub-quests while striking down the occult who stand in-between you and your goals. Along the way, you’ll grow a collection of spells, armor, weapons and level-up bonuses to help even the odds. Where this title heavily deviates from its contemporaries is how the players moral choices impact the story and the world. Sidequests are rarely as one-dimensional as they appear when you accept them, and often reward players with entirely new areas to explore, bosses to fight, and even new equipment to carry. This eventually results in various optional endings and final bosses. I cannot recall any side-scrolling action game that leans this heavily into player choice, with a level of interactivity that makes the whole experience feel undeniably modern, despite the retro visuals. 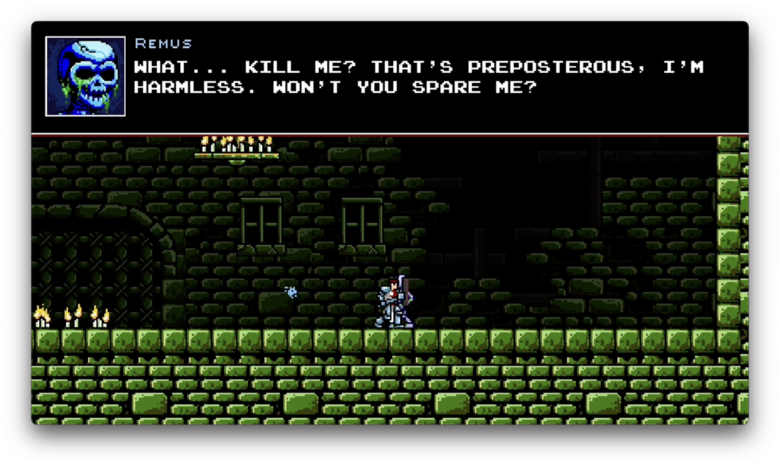 Would you kill him? 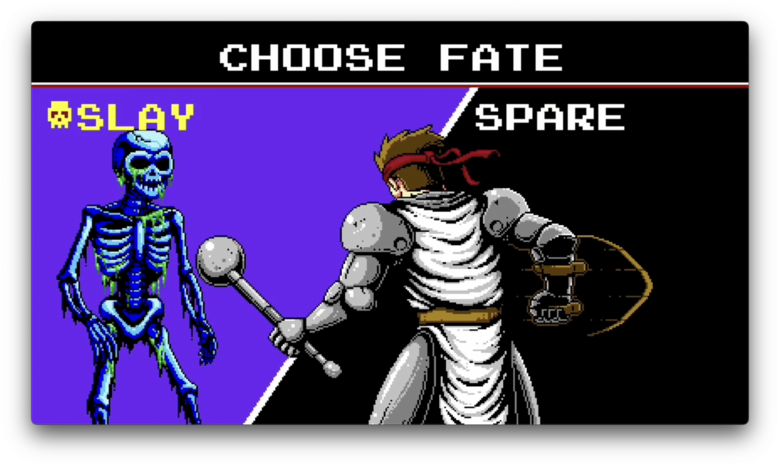 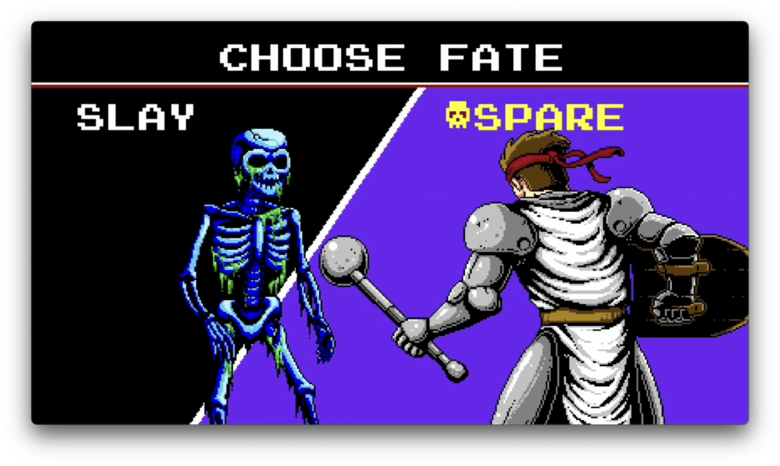 Or not to slay? 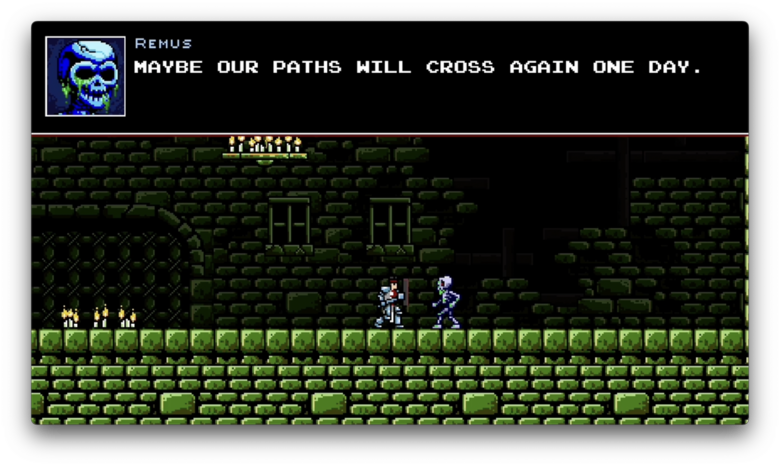 Will you regret this?
View All

Presentation-wise, Infernax had the clear goal of looking like an authentic NES game. The protagonist and enemies alike walk and attack with very few keyframes of animation, as was the norm back in the day. Most of the environments are green forests, brown mountains, or dark dungeons, which become soaked in the bright red blood of your colorful and varied enemies. This makes for a visual experience very easy to process, which is important given the high level of challenge Infernax asks of the player even on the default difficulty. A high point in the visuals comes from moments before each boss battle or morality choice. You’ll be presented with a splash screen featuring the hero and the NPC/foe staring back. These show off the game’s best artistic designs, displaying a highly detailed look of your target and their condition. 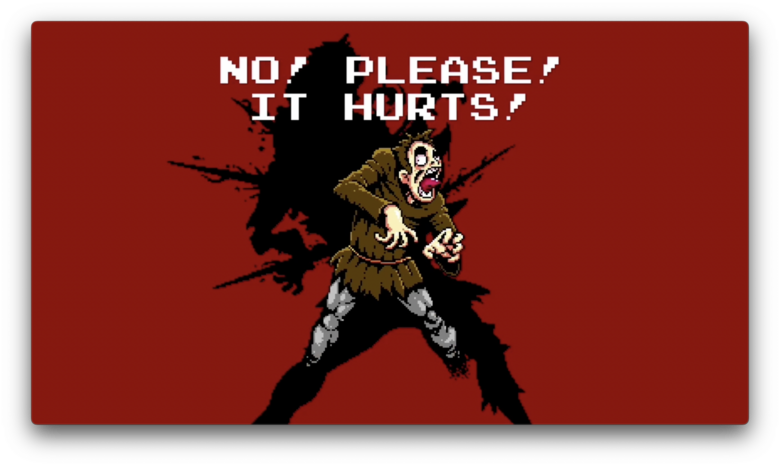 Choices do have consequences. 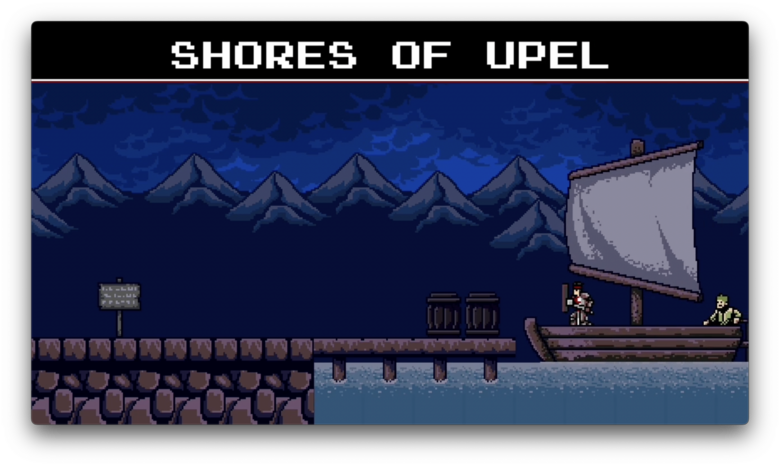 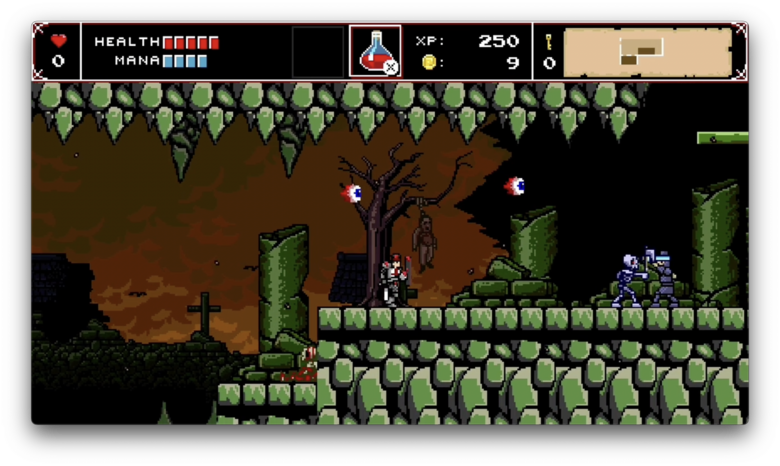 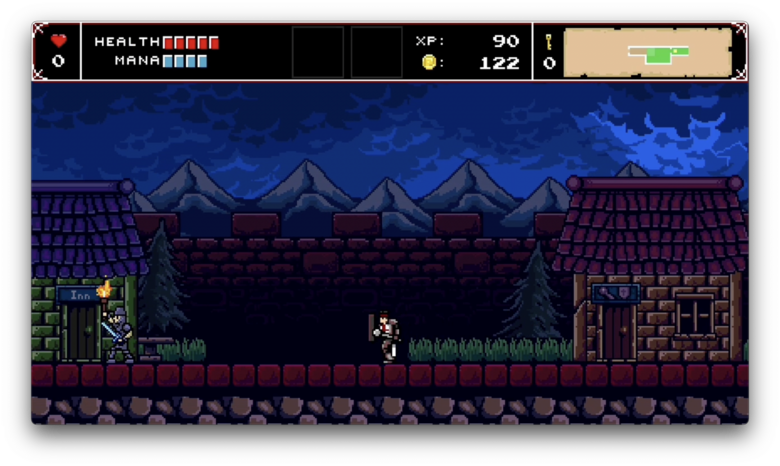 Exploring the first town at night.
View All

The hero, Alcedor, controls much like his inspirations from Castlevania’s Belmont clan. He wields a short-range mace instead of a whip, which leads to a greater emphasis on footwork and spacing. You only just barely possess more range than most enemies’ stubby sword or claw swipes, and Alcedor always has his shield drawn for enemies with spears or projectiles. Even with a shield, the default standing/walking height leaves Alcedor defenseless from the waist down due to low-hitting strikes. You can guard against these attacks by simply crouching to lower your shield, but this leaves you immobile and open to enemies approaching from behind or above. Infernax’s combat constantly requires you to be spatially aware, and when coupled with the protagonist’s set jump height, makes for quite a challenge.

The trials and tribulations are furthered by a death system that only allows you to respawn at the last holy monument you chose to pray at. Even when you do this, you’ll only carry forward the gold, experience and progress you had at the point of saving, and not when you died. This mechanic goes hand-in-hand with Infernax’s economy system, which is a key element that keeps the game challenging, while never feeling overbearing.

In Infernax, each town you find has shopkeepers selling empty flasks to fill with healing and mana potions, new spells for healing or summoning familiars, or better maces and armor. You can even purchase expensive extra lives to help ease the penalty of death. Then there’s the experience system, which awards the player with EXP points for every enemy slain. These points can be cashed in at the save points to further increase HP, MP and overall damage. All of these features combine into an experience that feels rewarding and engaging, instead of cheap.

After the game’s opening, which is a linear slice that shows off the morality choice system, you are mostly set free in the world to attempt the main and sidequests you uncover. Before long, you’ll discover a church locked by a mechanism with five glowing orbs tied to five separate bosses. As you might suspect, each of these bosses can be found at the end of a unique dungeon, complete with keys and a piece of equipment to collect. Separating each of the dungeons are expanses of countryside and mountains filled with all forms of ghouls n’ ghosts hellbent on killing you in. Should you fail, you’ll be treated to a unique and brutal death animation for each enemy or trap.

The dungeons in particular strike a great risk-versus-reward balance, as you’ll always need the keys or the treasure within them to reach the boss. That said, there is only a save point at the entrance of each dungeon, so being deep inside and finally finding keys or gear will present a choice. Do you press on and risk restarting everything if you die, or backtrack out with your newfound spoils? If you do exit, you might have enough EXP points for a level up, allowing you to return to a dungeon stronger, and more refreshed. If you stay and fight, you might encounter a boss you can easily kill, or one that wipes you out in an instant. There’s no right answer, and every dungeon makes you face this difficult question. 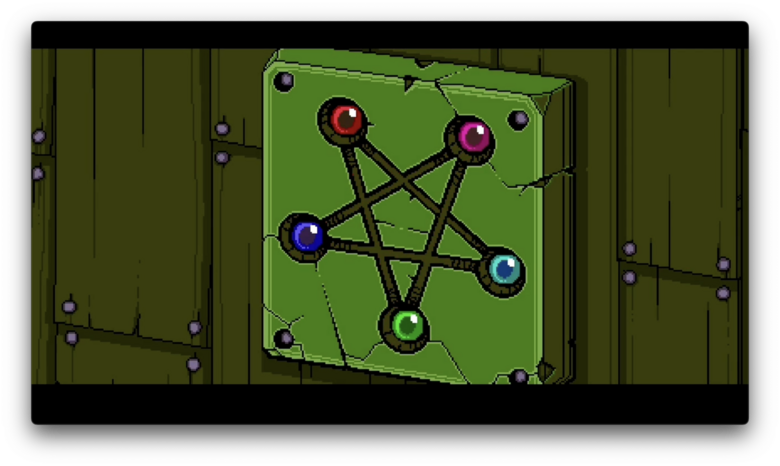 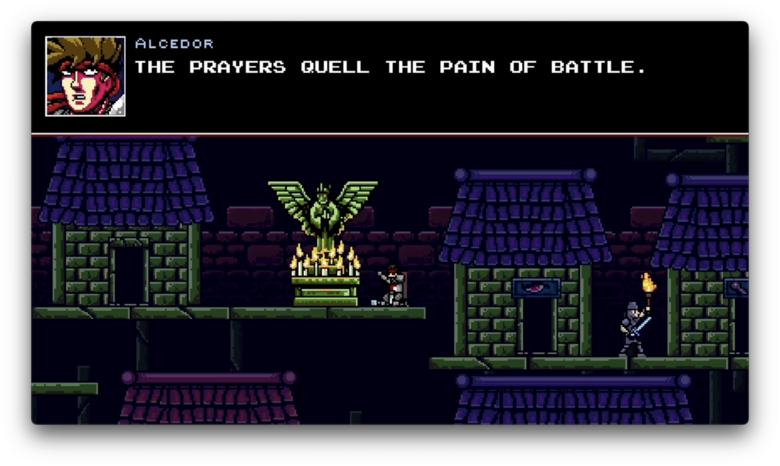 Pray for save travels. 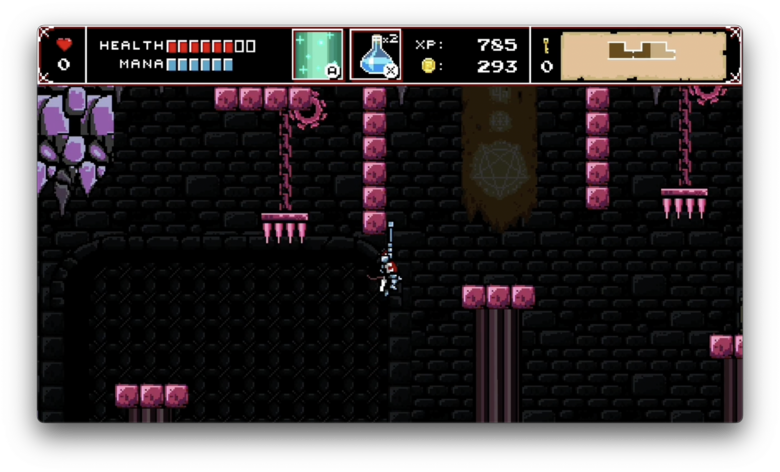 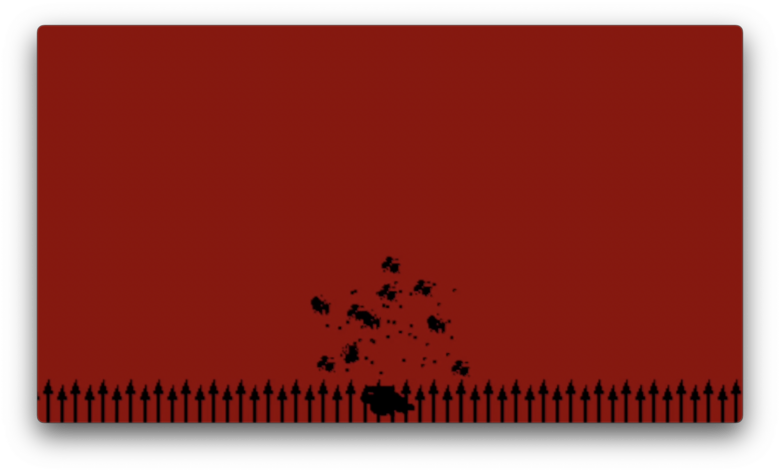 Time your jumps properly or else ... 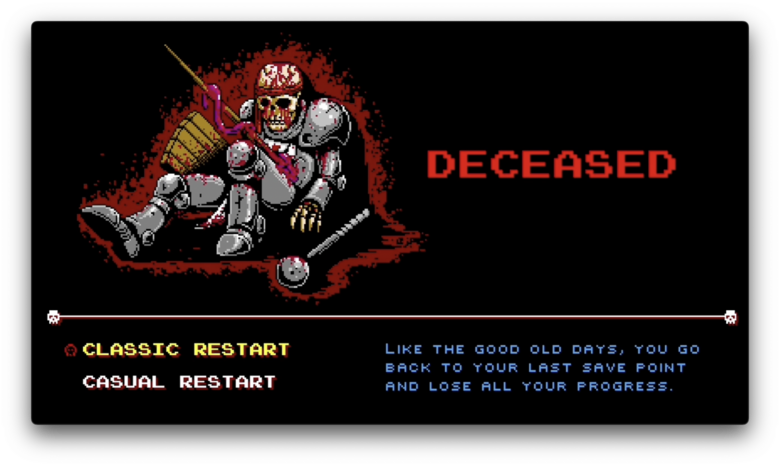 Each of Infernax’s bosses does a fantastic job of blending platforming and combat skills, with most requiring you to ride on platforms to reach a weak point, avoid attack patterns, or dispose of henchmen. Lots of bosses also conceal their weak points while they perform long attack animations, forcing you to successfully dodge before you can make a counterattack. These bosses are quite thrilling, which makes the time commitment required to travel back after a loss a bit more palatable. Finally securing victory after one of these grueling battles really feels like a triumph, which only motivates you to push forward on your journey.

Infernax offers many high points, chief among them being a strong visual identity, a striking soundtrack, wonderfully balanced systems, and engaging combat. The game also happens to be packed with secrets and Easter eggs to find, be it a nod to Castlevania with a chicken in a wall, a hidden cutscene paying homage to Castlevania 2’s infamous tornado, or a trick where eating food actually poisons instead of heals. One Easter egg stands out above all others, as it uses the famous Konami Code to give you an alternate take on the entire game. Believe it or not, you’ll play as the same main character, but decked out in Contra Soldier gear! There’s even a hidden hallway that contains a Game Genie, complete with working codes that alter the game’s rules. For any player with a fondness for gaming’s early history, Infernax will no doubt charm with its reverence for the games that came before it. 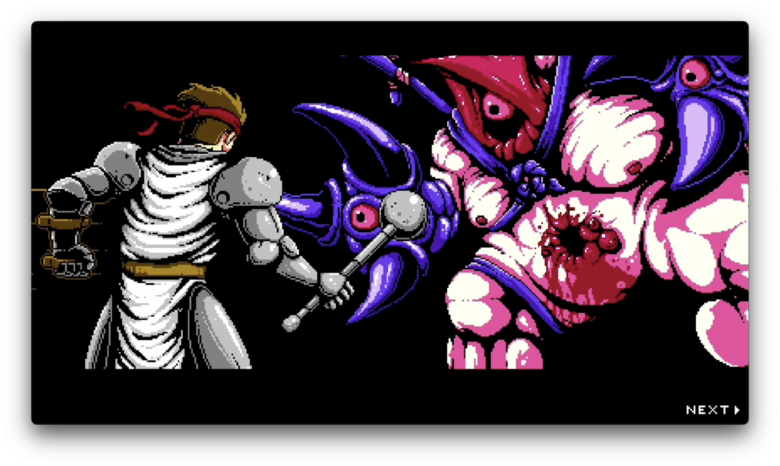 These bosses are as serious as they look. 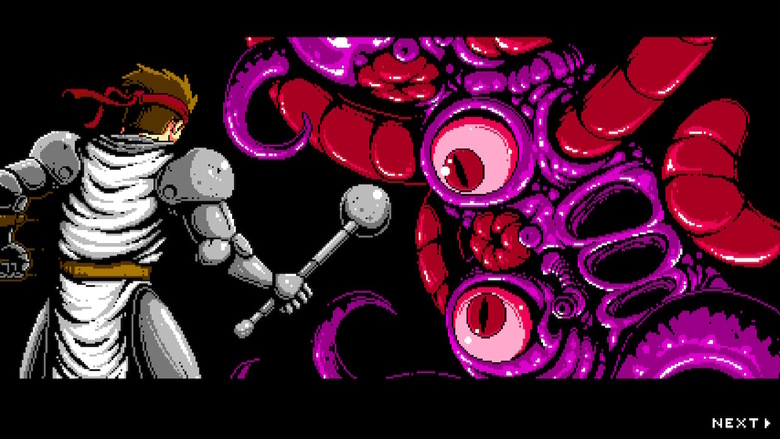 These guys somehow get way weirder then this.. 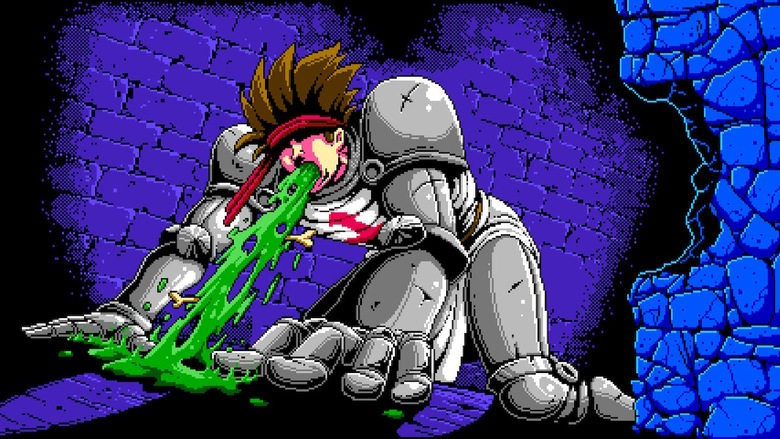 Don't do EVERYTHING your idols do. 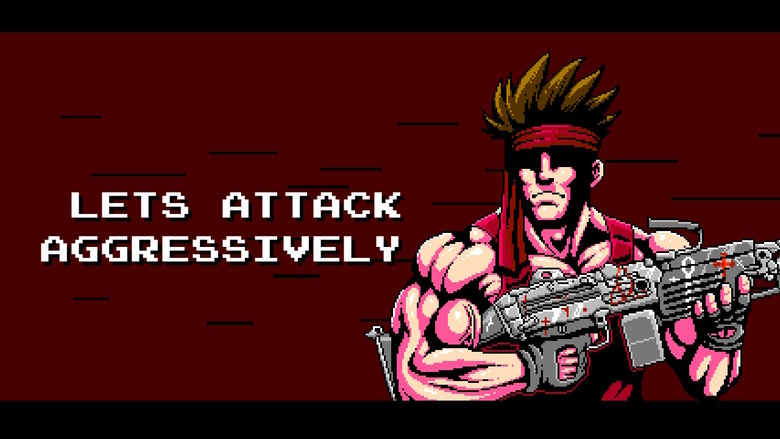 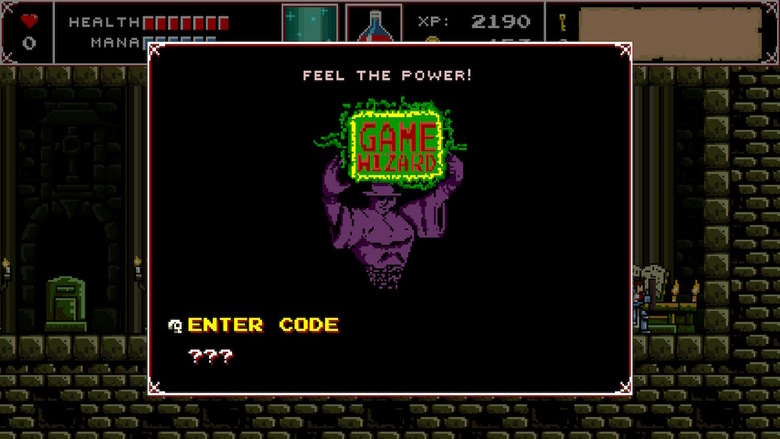 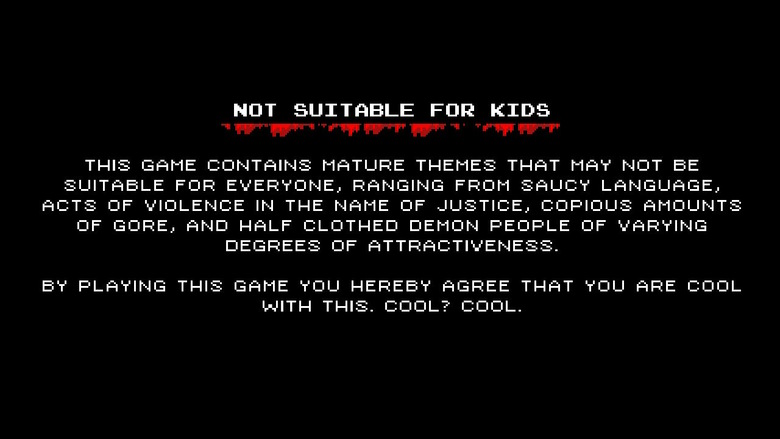 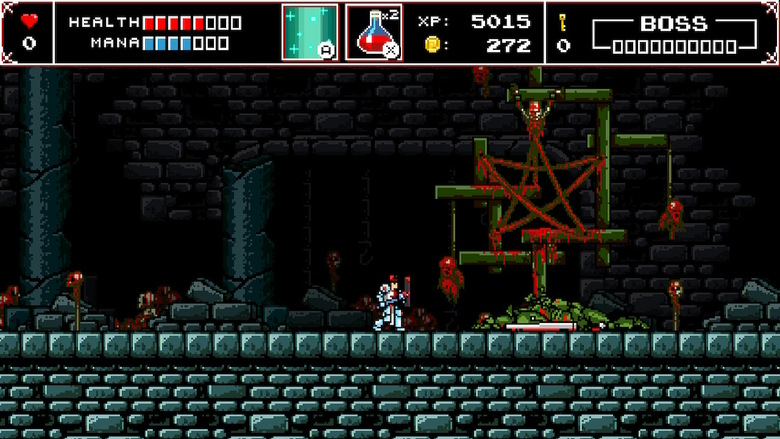 Easter eggs aside, this game is mostly serious toned.
View All

With games nowadays I rarely sit down and play something I truly feel was made for me. Infernax is, without a doubt, one of those experiences. Just as I did with games in my youth, I completed my initial playthrough of Infernax in one sitting. That one highly satisfying session can be recreated multiple times, albeit with vast differences facilitated by the morality system, multiple endings, and different enemy placements between day and night. Infernax is the whole package for those who adore NES action games, and one retro enthusiasts shouldn’t miss. 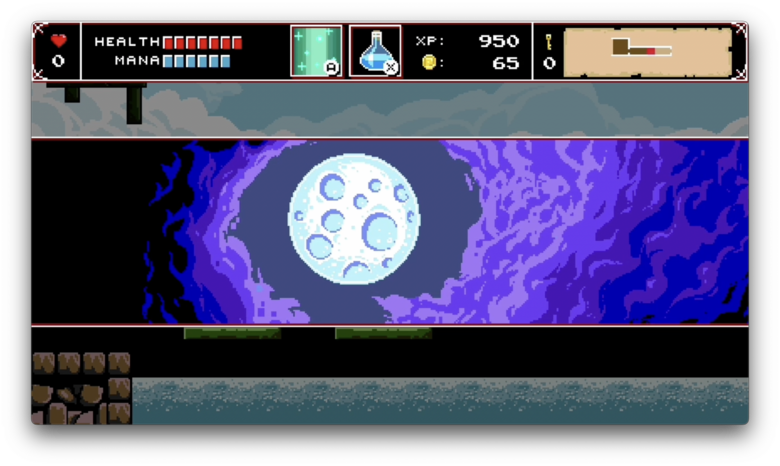 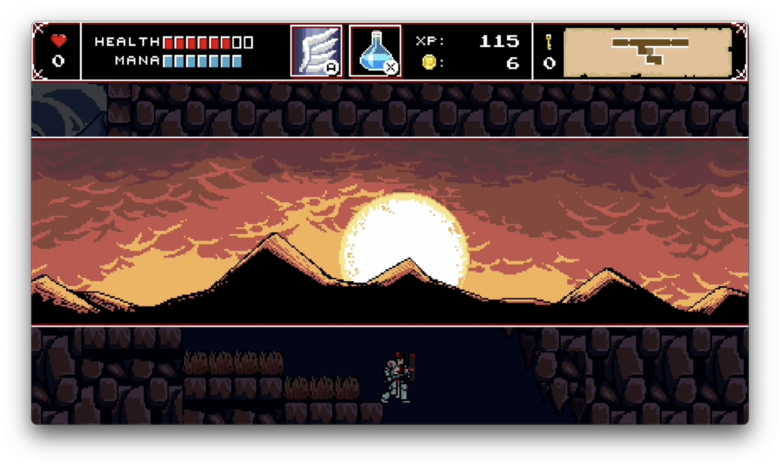 <---- Yet such a beautiful day to have Infernax.
View All