Inspired by the classics 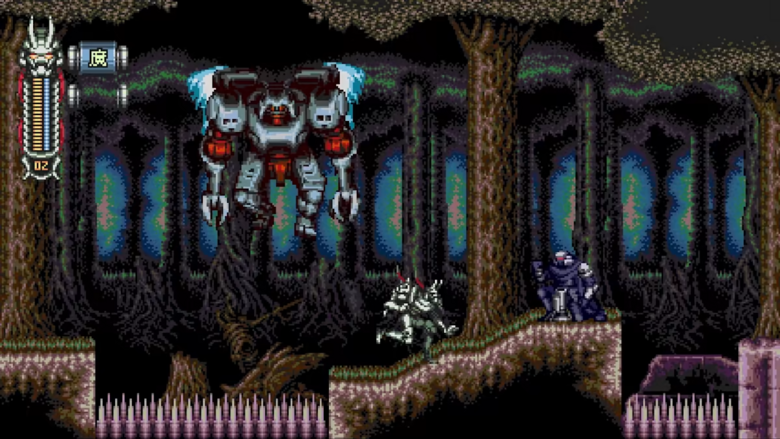 Vengeful Guardian: Moonrider was released on Switch earlier this week, and you can check it out right now on the eShop. If you’re looking for more insight into the game’s development, a new interview courtesy of Nintendo Life sheds some light on the behind the scenes process. The game’s lead developer Danilo Dias and producer Thaís Weiller discuss which titles inspired the game’s retro look and feel, as well as how the game changed during the development process. See below for a snippet.

Nintendo Life: What were your influences for Vengeful Guardian: Moonrider?

What kind of challenges did you face during the development of the game?

Danilo: We changed the game quite a bit during the development, it was originally supposed to be more linear, like Dracula X. We wanted to change the game to have a more open style like Mega Man Zero so you can choose the order of the stages that you want to play. That was a challenge, because you have to rethink a lot of the aspects of the game.

Originally, it wasn’t supposed to include so many weapons, so during the development, we had to change everything and put the new abilities and weapons in place. That caused quite a bit of stress for us!

Thaís Weiller: Yeah the game was working in the first prototype and we thought “hey, this might be cool with more stages”, and then you actually put more stages in and think “hmm, maybe not that cool!”. When you already have stages in place, it’s incredibly stressful changing up the main gameplay again. I forgot about that, thank you for reminding me of that nightmare!

Danilo: Yeah we had to change the level layout a lot along with the mechanics, but we thought the original idea was just too simple, so we changed it up to be more open-ended.

Click here to read the interview in full and learn more about the game’s design process, as well as what the devs might have in store for the future.