"Who exactly are you?" 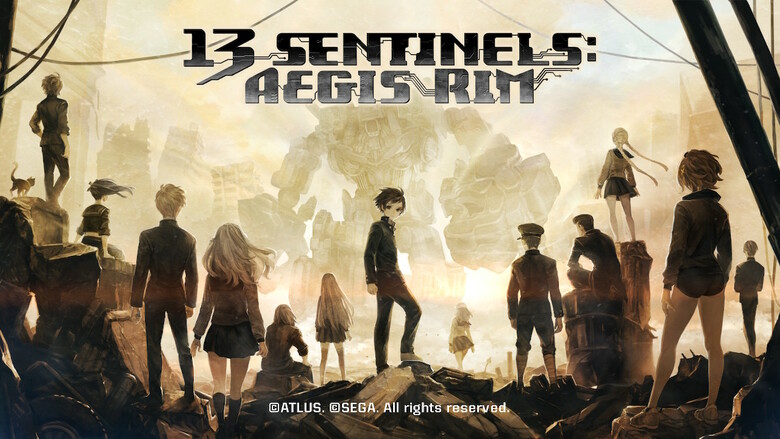 Can you uncover the truth?

Telling stories that involve time-travel is quite difficult, but Vanillaware has pulled it off with 13 Sentinels: Aegis Rim. Combining fantastic writing, addictive battles, and beautiful graphics, 13 Sentinels: Aegis Rim is a masterpiece that any fan of great narrative experiences should have on their Nintendo Switch. 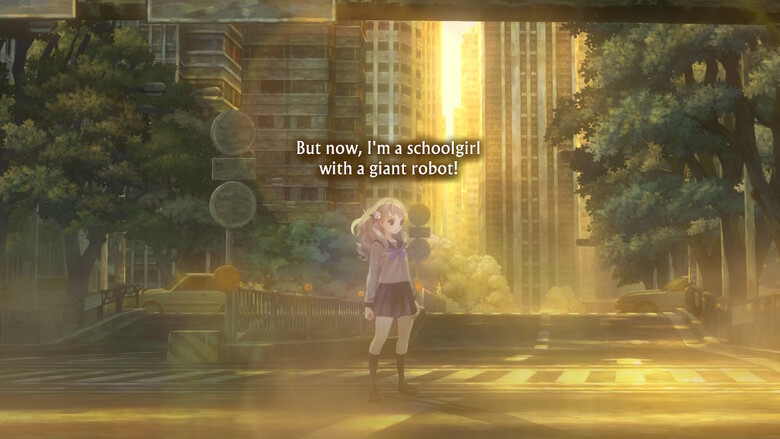 And the epic story begins...

13 Sentinels: Aegis Rim begins with Earth being attacked by kaiju (big monsters), and 13 high school students must fight against them. The gameplay is divided in two sections: Remembrance and Destruction. In the former, we play through fragments of the past to uncover the events that led to the invasion, while in the latter, we fight against the attackers. Both segments are great for different reasons. 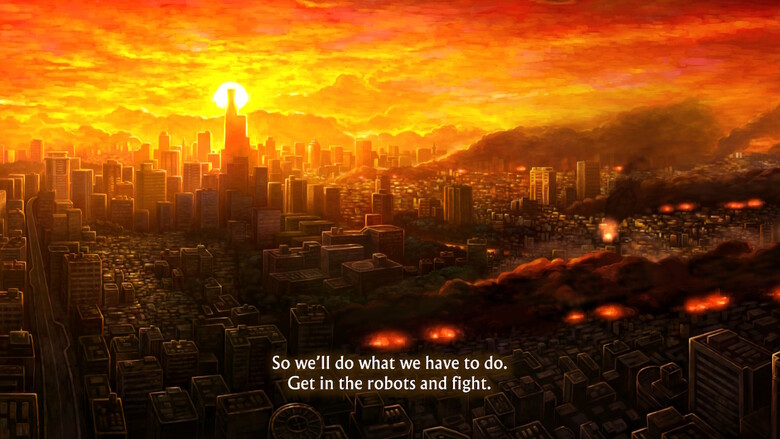 There is so much to protect.

In Remembrance, you review the past from 13 different points of view, just as you might in an adventure game. You select a character and talk with people while collecting keywords that allow you to progress further. Sometimes there are multiple paths that you can take, but once you reach the conclusion of a segment, you can come back to make different choices. 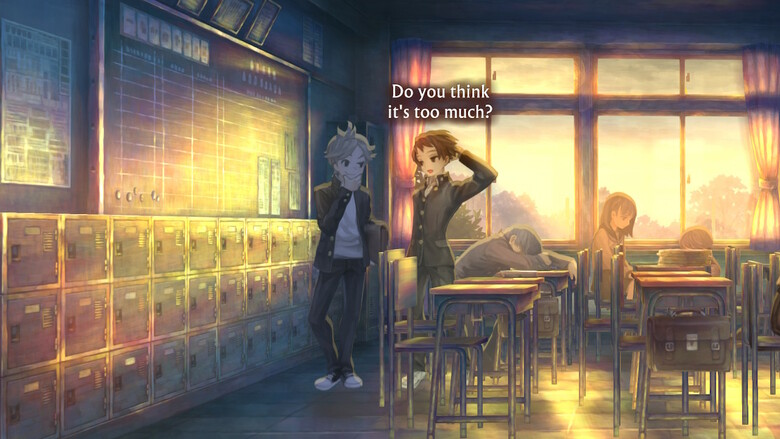 Having 13 main characters and a story involving time travel demands that the writing and pacing are consistent, and Vanillaware definitely delivers. No moment you happen upon is dull, nor do you experience anything overwhelming. Truths are revealed at a good rate, and the order in which you progress is completely up to you. Certain paths are unlocked once you’ve viewed a related scene, which ensures the narrative is presented coherently. Also, some paths are closed off until certain battles have been won, which means everything both ties into and makes sense with Destruction mode as well. 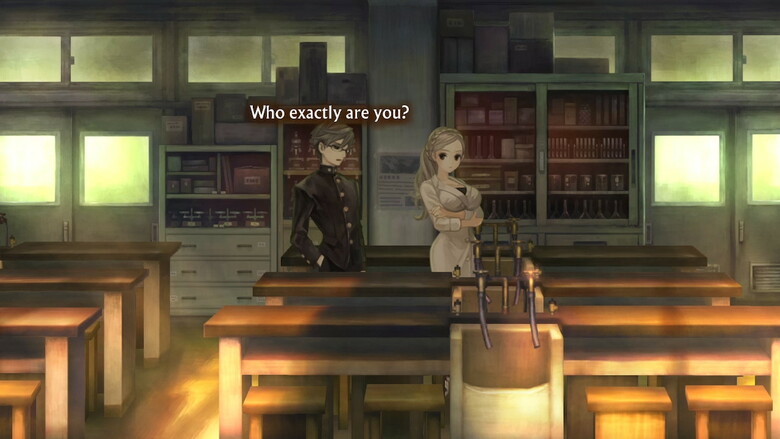 You will be asking yourself this question a lot about many of the characters.

Speaking of battles, combat is very fast-paced and quite addictive. If you aren’t a fan of real-time strategy games or are apprehensive about giving them a try, there’s no reason to worry with 13 Sentinels: Aegis Rim. First off, difficulty can be set to Casual, which allows you to quickly win battles and focus on the story. Second, the gameplay in 13 Sentinels feels more like a turn-based than real-time, thanks to the Active Bar system. This means every command has a cooldown period, and the game will notify you when something can be used again. Even better, the game will pause the action while you’re making your decision. I love having time to think about what the best option would be at any given moment without the pressure of real-time input. 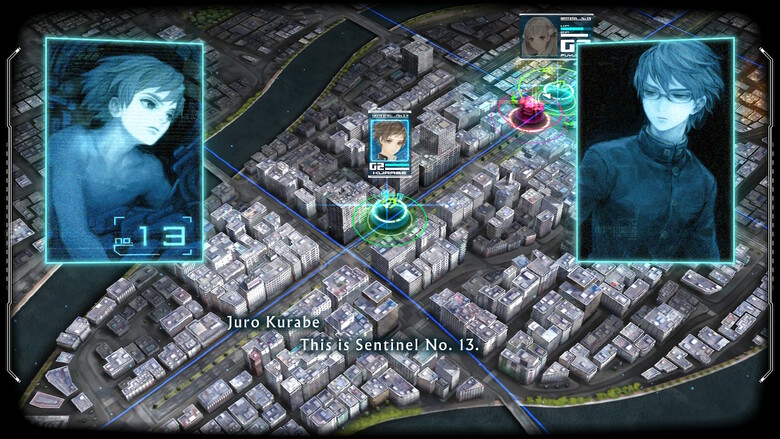 13 sentinels trying to defend their world.

Most battles can be finished within minutes, so if you do lose, it’s not a painful experience. In fact, preparing for a battle is just as fun as the battle itself. You constantly unlock new commands, skills, and upgrades, and can strengthen your character with Meta-Chips. These Meta-Chips are collected mostly through combat, but you can also pick some up throughout Remembrance mode. This allows you to swap back and forth between both modes to collect Meta-Chips and level up. Again, Remembrance mode has some moments that unlock battles in Destruction mode, so you’ll have no choice but to swap between the modes to complete the adventure. This is an excellent system, as it allows you to bounce from one mode to the other if you’re having a tough time with a battle. There are even instances when completing a battle or progressing through story bits will help you in areas where you’re stuck, as you’ll come across new details to help clear the path ahead. The synergy that both types of gameplay achieve is a tough feat to pull off, yet Vanillaware handles it with ease. 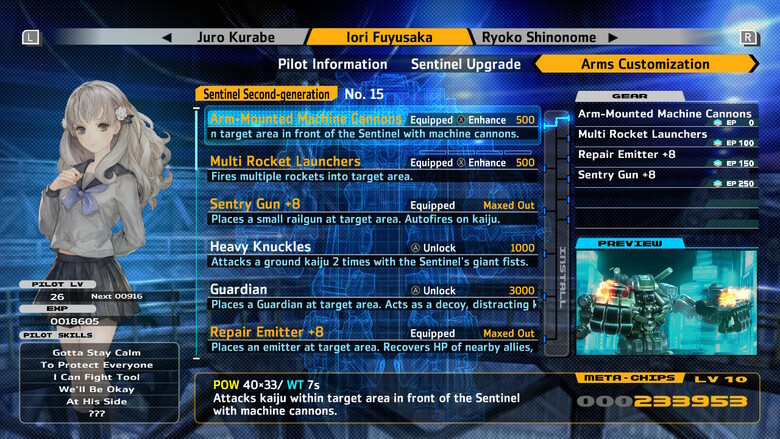 Upgrading the different systems is so much fun! 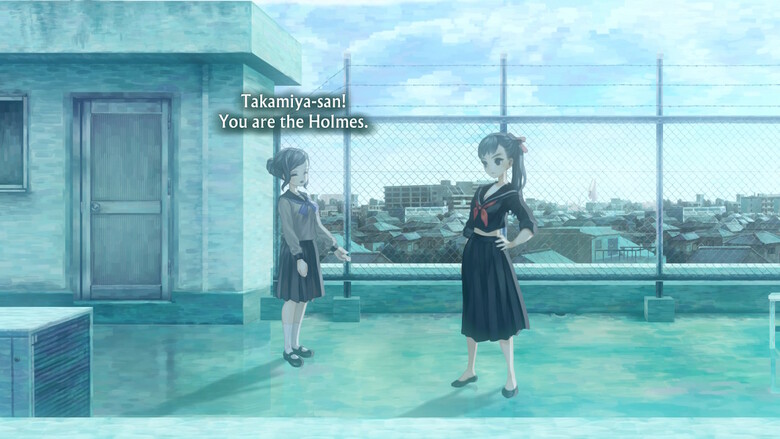 We need to put our best detective hats to uncover the mysteries that this story holds.

With similar deftness, the ambitious story presented in 13 Sentinels delivers in every single way. It is extremely entertaining to discover new questions about the setting, characters, and events, and equally fascinating to realize how tightly connected everything is. Answers that seem vague will eventually have a clear explanation, and every detail picked up along the way will make sense in time. Every story offers complete satisfaction in terms of entertainment and resolution, which Vanillaware once again deserves major praise for. 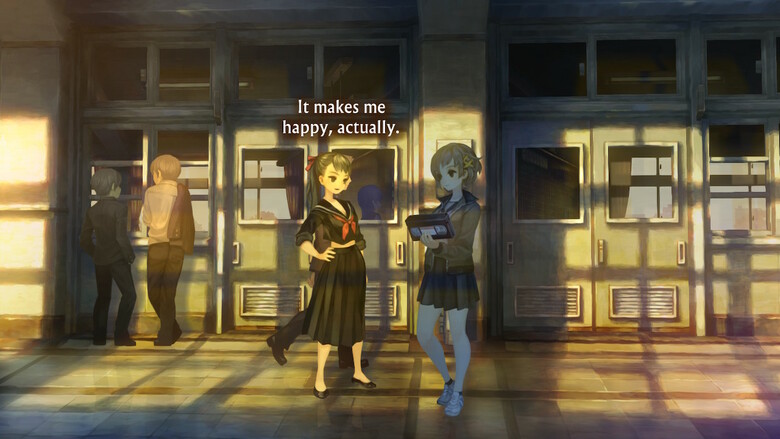 Me too. It is not everyday that you find a coherent sci-fi story. 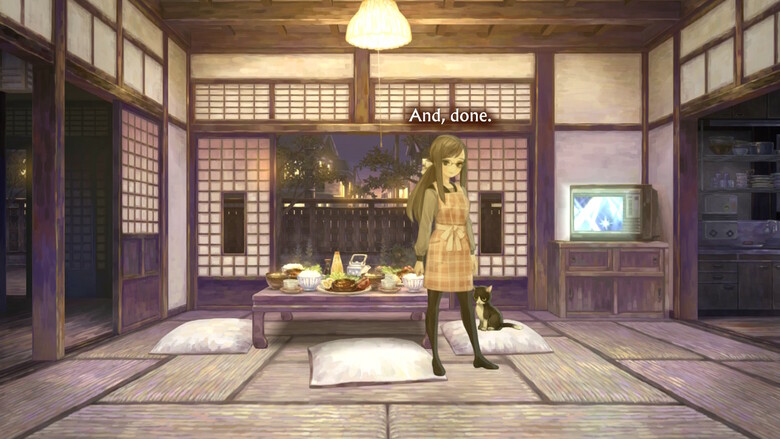 A traditional minka where you can see the tatami, the shoji, the engawa, and the genkan. The attention to detail is outstanding.

Moving on to visuals, 13 Sentinels is absolutely beautiful, with backgrounds that come across as real, and non-playable characters that feel alive. Even animations are extremely well done, with characters movements that reflect their personalities. The attention to detail here breathes life into the journey in a way that’s very much appreciated. 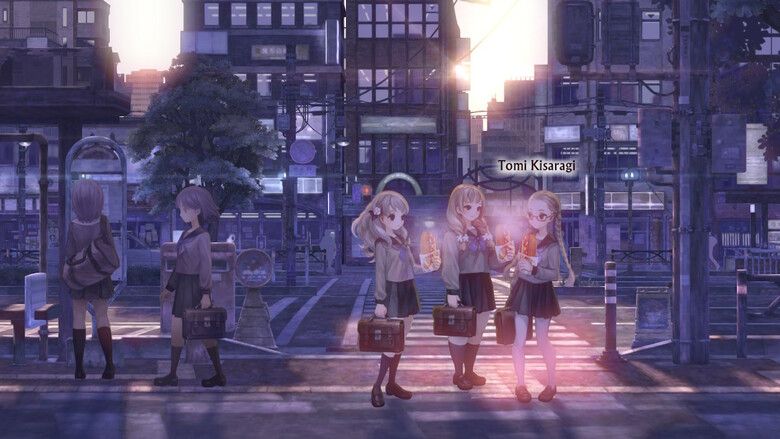 Did I make hot dogs last Saturday and will I prepare some Japanese dish this week? Yes. Will this game inspire you to try the food the characters eat? Absolutely yes!

Worth of recognition all its own is the game’s depictions of food, which look unbelievably mouthwatering. If you’ve played Muramasa: The Demon Blade, another Vanillaware masterpiece, you may already know how talented this developer is when it comes to crafting appetizing food. That same skill is on display In 13 Sentinels: Aegis Rim through traditional Eastern cuisine like Nikuman or Yakitori, Western specialities like Hot Dogs and Strawberry Crêpes, and more. There’s no doubt you’ll be impressed with the detailed and delicious presentation. 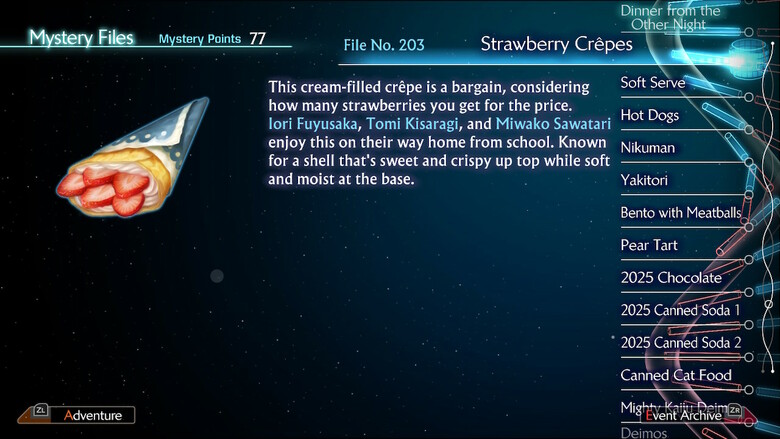 This attention to detail is found in every facet of 13 Sentinels, including the writing. For example, people from different eras speak in unique ways, and comments on the battlefield vary depending on who’s being addressed. Every single comment also appears on-screen, so even if you play with Japanese audio, you won’t miss a thing. This is thanks to 13 Sentinels’ top-notch localization, which goes so far to include explanations for slang and culture in the Analysis menu. This menu also provides info to explain story concepts, characters, and relationships. 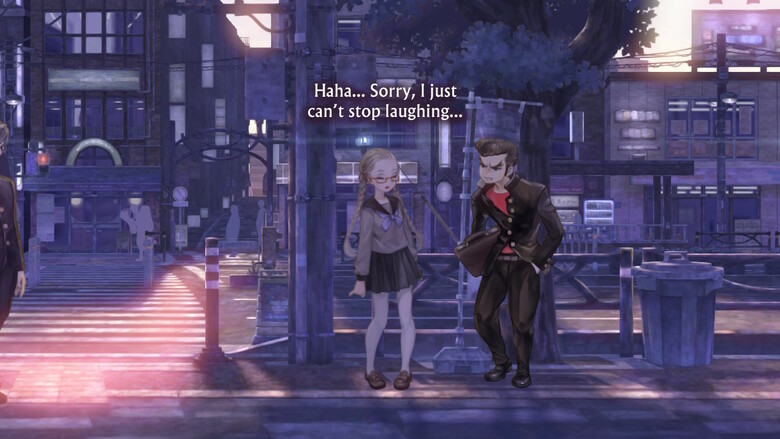 If you don't get a joke or situation, the localization team did an excellent job at explaining everything.

It’s worth noting that there’s a separate menu that lets you replay every event scene you’ve come across, but in chronological order. If you are confused at any point in the game, you can hop into this menu to make sense of things. That said, you might want to hang back from diving into this menu, as seeing some things in chronological order can spoil story elements before they eventually unravel themselves through gameplay. 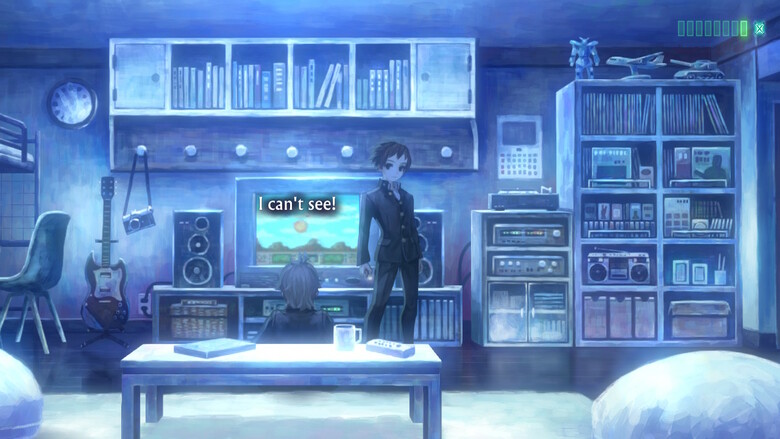 If you can't see how to progress, maybe playing a different mode within the same game will help.

You’ll also need to visit a menu to unlock Mystery Files in order to make story progress with some characters. You can view these Mystery Files by earning Mystery Points through Destruction mode. You’re scored on every battle you complete, and if your score hits a certain threshold, you’ll earn more Mystery Points. You even get a Mystery Point for successfully completing each battle for the first time. Lastly, you can keep trying your hand at battles to achieve an S rank, which is achieved by keeping your damage low. Also, you can aim to complete Bonus objectives, but sometimes you can’t do it right away as characters needed to hit the goal may not be available. 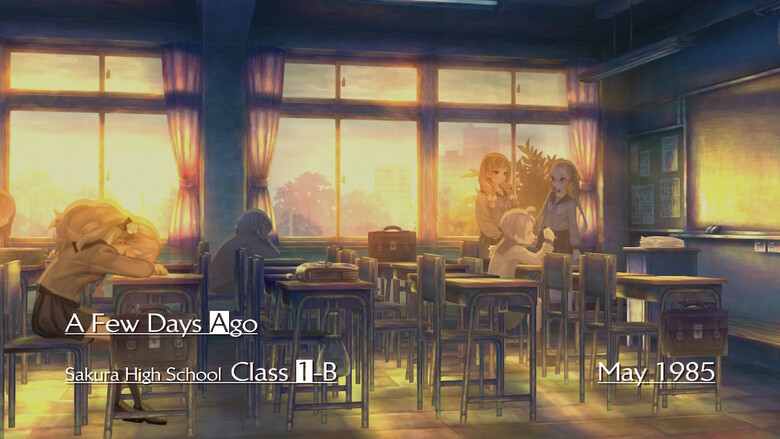 Swapping characters between battles is a very enjoyable feature, as it encourages you to try different combinations to see what works best. It’s not a big deal if you pick a combo that doesn’t work out, as characters are unavailable only for one battle after they have fought in a couple of matches. If you’re really missing a character you do have an option to recover, but doing so will reset your win streak, and lower the score you’ll get. 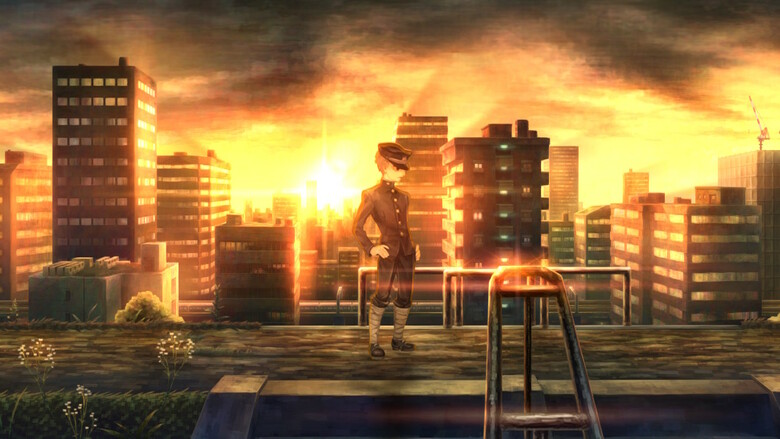 Miura is ready to fight again.

As you may know, 13 Sentinels: Aegis Rim landed on other platforms before it came to Switch. We’ve certainly seen some wonky ports on the console, but you’ll be happy to know that this Switch outing plays great in both docked and handheld modes. Everything from the soundtrack to animation has been brought over with great care, making this port feel like it was expertly handled. This is all great news, as 13 Sentinels feels like the perfect game for Nintendo Switch, as you can play for hours docked, and then take the game on the go for some story segments or a quick round of battles. 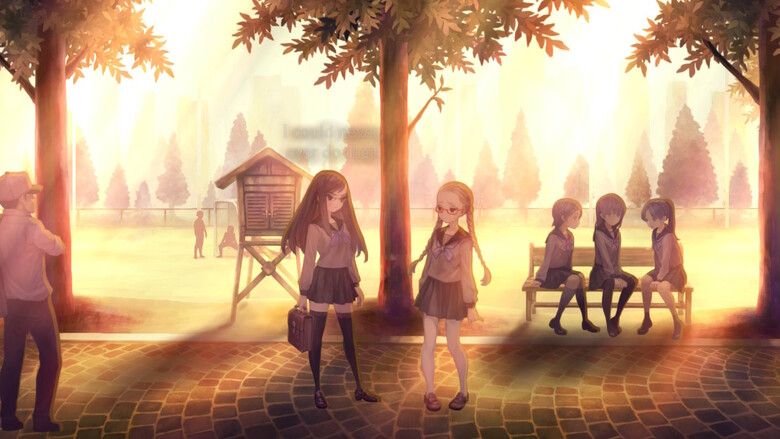 Their face expressions tell a story without the need for words.

Superb storytelling, addictive gameplay, and a flawless presentation make 13 Sentinels: Aegis Rim a truly can’t-miss title. For anyone looking for the next masterpiece to add to their Switch collection, this is it. The game will challenge you with its story while still respecting your intelligence, making it a great adventure for anyone to take on.