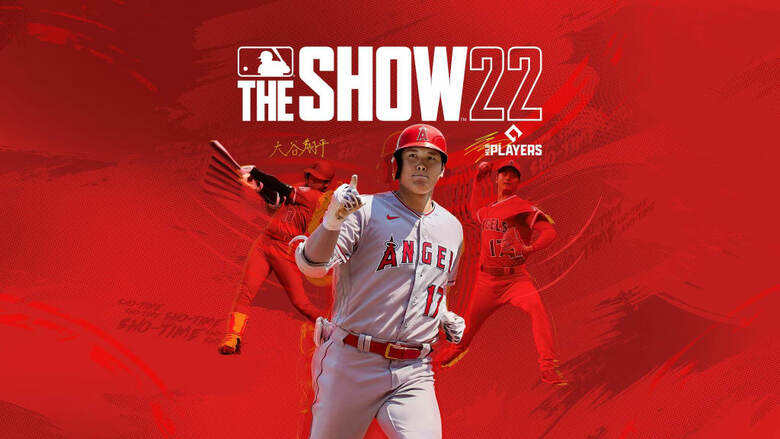 It’s been 10 years since the release of MLB 2K12 for the Wii and Nintendo DS, which essentially marked the beginning of a dearth of MLB licensed games on Nintendo systems. Sure, there were the resurrected RBI Baseball games from 2017-2021, but these were widely panned by critics as poor to middling efforts. Arcade-style baseball games have also been available, but they don’t have the MLB teams or rosters that fans of the sport want to play as. After many long years, licensed, simulation-style baseball steps up to the plate for Nintendo fans once again with MLB The Show 22 on Switch.

For a bit of context, MLB The Show is a highly regarded series developed by Sony Interactive Entertainment. Yes, it’s as strange as you would think to see the PlayStation symbols on the Switch screen when booting up the game. In 2019, it was announced that MLB The Show would be going multiplatform. Microsoft got their first taste of the series last year, while Nintendo fans had to wait until 2022.

Baseball is a sport that somehow manages to be highly steeped in tradition while still evolving with modern analytics that focus on things such as launch angles and spin rates. There are so many options available to evaluate players, situations, etc. that the possibilities seem almost endless. MLB The Show 22 encapsulates that essence in video game form. It’s easy to see that the developers are baseball fans and understand the intricacies of the sport.

As a first-time player, it can be overwhelming to see the various control options. There are multiple different styles for hitting, pitching, fielding, and baserunning. You can use buttons, analog sticks, or some combination of the two. The computer can assist you and take over parts of the gameplay. Don’t like the camera angle? Scroll through the options and find one that works for you. It’s a lot to take in, but it really does allow you to tailor the experience to suit your playstyle. 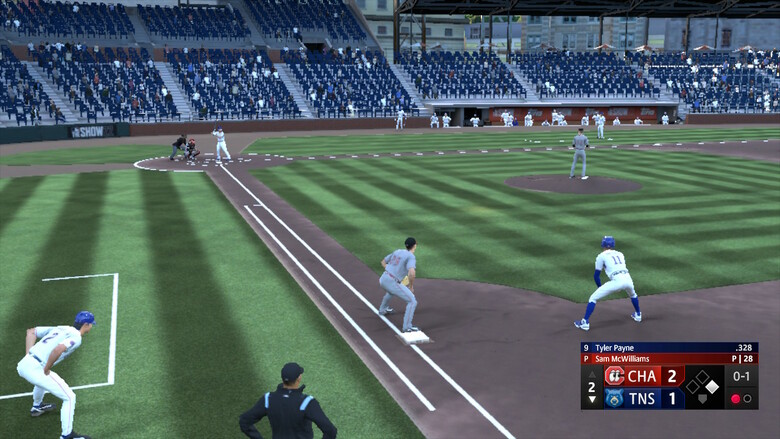 These options carry over into how the individual games actually play, with the ability to use a retro mode which makes The Show 22 feel like an old-school baseball game with simplified controls. This mode even adds in retro sound effects when the baseball is in the air, bringing back some nostalgic memories.

Franchise mode is available and contains all the minutiae you could ever want. Again, the ability to customize your experience is front and center. If you want to play the games, be the GM, and deal with the player development side, it’s all right there for you. If that’s not your style, the computer can take care of those things while you just focus on winning the pennant.

Road To The Show is another popular mode available in The Show 22. At the start, you create your own player and pick their position. Your player is then drafted, and you begin the journey in the minor leagues with the goal of eventually being called up to the major league roster. 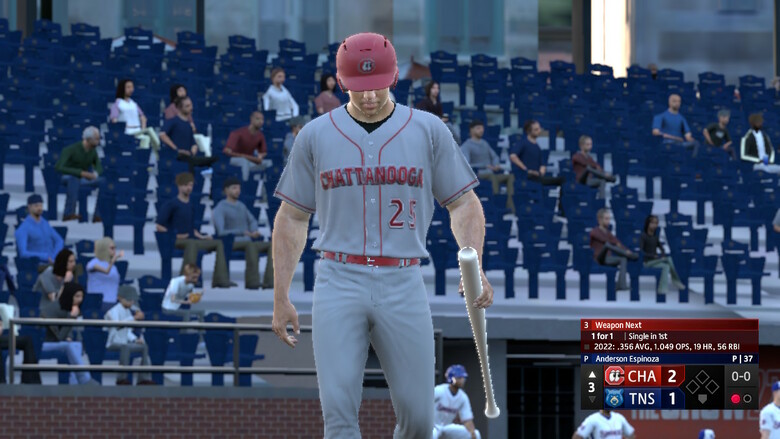 When it comes to individual games in this mode, you don’t have to play every inning. Instead, you take control at various moments during the game. If your character is a position player, for example, you will control every at-bat, but only a few select plays on defense. This allows you to complete each “game” in a very short period of time which is a godsend for those with limited gaming time.

Your performance during these controlled periods affects your character’s progression in numerous attributes. There are also challenge moments that allow you to choose from a few selections that, if completed successfully, will give additional boosts. Character progression or regression is shown after each game. Stat boosts are also available on off days if you make use of training mini games. 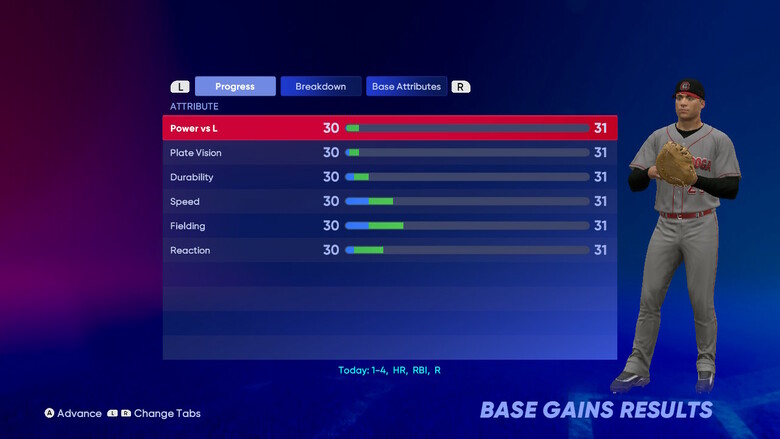 March To October is another mode that features a great alternative to playing a full season. This mode allows you to pick a team and take control during key situations during the season to try and help your team make the playoffs. Comparably to Road To The Show, you don’t play every inning of every game. In fact, you might only take control once during a handful of games.The scenarios here can be things such as holding on to a lead after the seventh inning or making a late inning comeback.

You enter these situations in the late-stages of a game and take control to try and achieve the stated goal. If you succeed, it will send the team on a hot streak which can lead to more wins during the simulated games. If you fail, your team may go cold and lose more often when not under your control. Again, this is another way to speed up what can otherwise be a very long season and make it manageable to see through to the end. 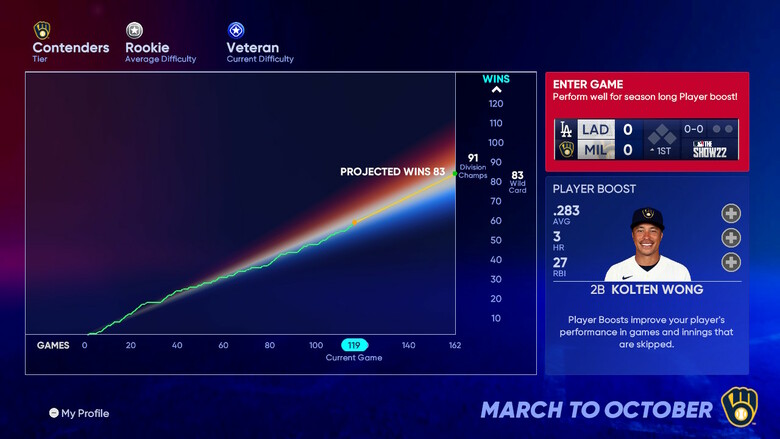 There are online modes available, but they were not tested for the review due to lack of high-speed internet in the reviewer’s area suitable for online gaming. Like the rest of the game, there are plenty of online options to choose from including ranked games, replaying historical moments, a trading card type of ultimate roster building mode (microtransactions included), and others. The Show 22 on Switch features both cross-play and cross-progression between all platforms.

Graphics in The Show 22 are understandably less detailed than other console versions. They’re not distractingly poor and don’t detract from actually playing the game. Performance during gameplay is solid. Scenes in between plays are another story, as they can be jittery and choppy. 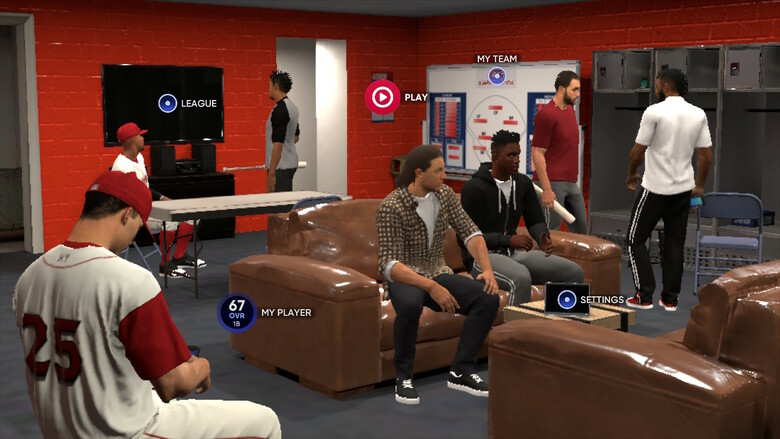 This is disappointing, but it doesn’t happen during the actual gameplay which would have been much more egregious.

The play-by-play commentary in the game is very impressive. Not only do the announcers discuss the current at-bat, but they also tie in stats from the whole game and prior games as well. This detail goes a long way towards making it feel like you’re participating in an actual baseball broadcast.

MLB The Show 22 has a staggering number of options to customize your play experience throughout multiple modes offering varied gameplay. It’s clear that the game is made by baseball fans for baseball fans. The Switch port may not look as beautiful as other versions, but it plays well and offers the additional ability to play portably. Considering the lack of high-quality MLB licensed games on Nintendo systems over the past decade, it’s a total no-brainer to recommend MLB The Show 22 to any fellow baseball lover.