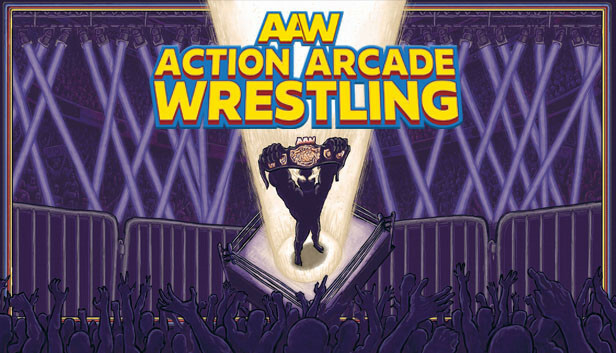 Many people are drawn to professional wrestling by the outlandish scenarios and sheer spectacle of it all. Pro wrestling expects the viewer to suspend their disbelief and just go with the flow. An inferno match where the winner is the one who successfully lights the opponent on fire? Sure, that seems plausible. With Action Arcade Wrestling (AAW), the two-developer team at Reverb has attempted to channel that energy while putting their own spin on the wrestling video game genre.

As the name implies, AAW is very much an arcade-style wrestling game. There is no story mode where you work your way from the bottom to become the eventual Heavyweight Champion like many other pro wrestling games. Despite that, AAW does contain sixteen different match types, including variations of singles, tags, and multi-man matches. Local multiplayer is available, but online will be limited to leaderboard scores in future updates.

The matches in AAW are fast paced, which lends to the “ok, just one more match” mindset. The controls are simple enough that anyone can pull off some truly spectacular moves. Sure, there are regular body slams and suplexes, but then AAW shows its over-the-top style with jumping, spinning piledrivers or laser beams shooting out of the characters’ eyes. It’s not realistic, but it isn’t supposed to be. Suspend your disbelief and go with the flow. 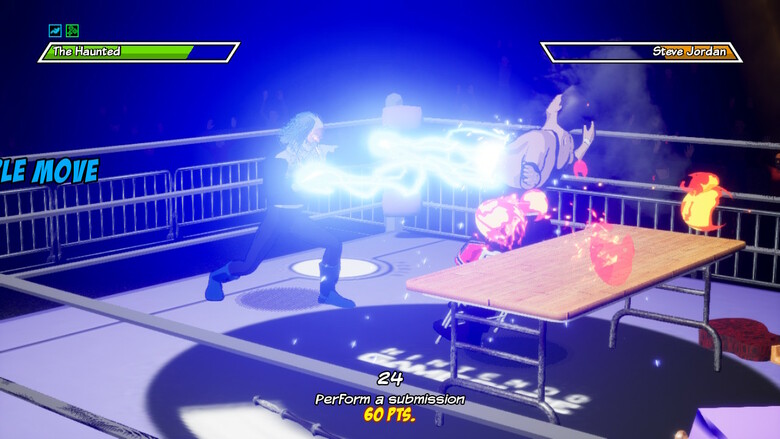 One of the unique and interesting mechanics of AAW is the inclusion of “spots”. One general definition of a spot in pro wrestling is a sequence of moves. During a match in AAW, a spot with a time limit will appear near the bottom of the screen. It could be something like “throw the opponent out of the ring.” The first player to execute the spot correctly receives a health boost, and then a power-up appears in the ring for passive health regeneration, increased offense, etc. These power-ups may be stolen during the match by the opponent, but they can also be sacrificed all at once to kick out of a pin at low health, potentially saving the match. The addition of spots and power-ups lends a strategic element to the game, and they can go a long way in turning the tide one way or another.

Unfortunately, the bombastic style of the wrestling mechanics doesn’t always carry over into other parts of AAW. There is a bit of asset flickering, and a few instances of freezing for a few seconds, if not outright crashing. Thankfully, these were quite rare, as the game generally performs well in both handheld and docked mode through all the match types, including the ten man Battle Royal. 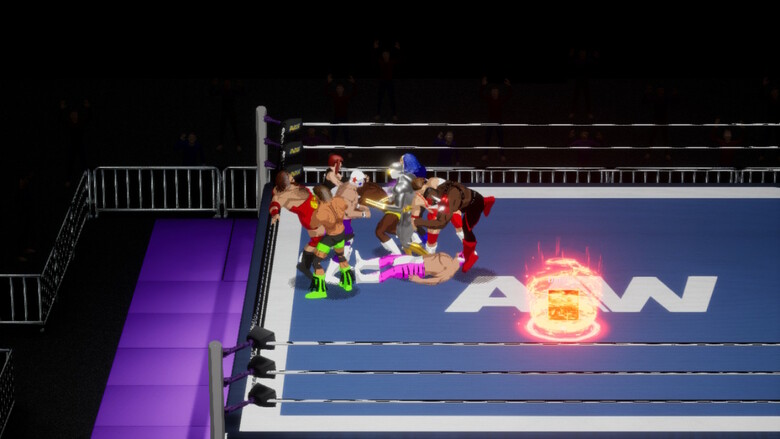 As for the game’s sound design, things come across as a bit lackluster. A generic late 80’s/early 90’s rock tune plays on the main menu. During the matches, an announcer will add a bit of color commentary, but you’ll mostly hear the sounds of the strikes, or wrestlers hitting the mat. While these sounds are satisfying, they also draw attention to the overall emptiness of the audio presentation. This goes hand-in-hand with the arenas, which feel relatively empty due to a lack of finer detail.

Characters and arenas in AAW are of a similar vein. AAW uses cel shading to give the game a comic book feel. Bright colors are seen in various characters and designs, but the detail can be quite low. Along with that, the characters are mostly forgettable, as they don’t have back stories to flesh them out. Finally, likely the result of the small development team, many of the moves are re-used between the roster. Sadly, this even applies to the selection of finishing moves.

While characters and arenas in AAW may not be up to snuff, user-created content helps to liven things up. Custom creations have always been a big part of pro wrestling games, and AAW follows in step with that heritage. In fact, there is a completely separate (and free) app available on PC called AAW Wrestle Lab, which lets fans create custom wrestlers and arenas. The developers have basically made their own creation tool set available to fans, and this makes for a bit of a double-edged sword.

On the negative side, this app is the only way to create custom content, as there is no in-game option. The app is also quite robust and technical, which means some players will find it too difficult to use. The positive of that complexity is the ability to create truly great fan content that can be downloaded for free. These creations run the gamut from current and former wrestlers to comic book characters, inanimate objects, and everything in-between.

The fan created skins and arenas don’t really change anything besides the visuals, but they honestly add a lot of personality and fun to the game. Do you want to see Grumpy Bear from Care Bears chokeslam a literal Christmas tree in the WCW Nitro 2000 arena? Give me a “Hell Yeah”! That was not a joke either…everything mentioned above is possible in AAW! If that doesn’t tickle your pickle, this probably isn’t the game for you. 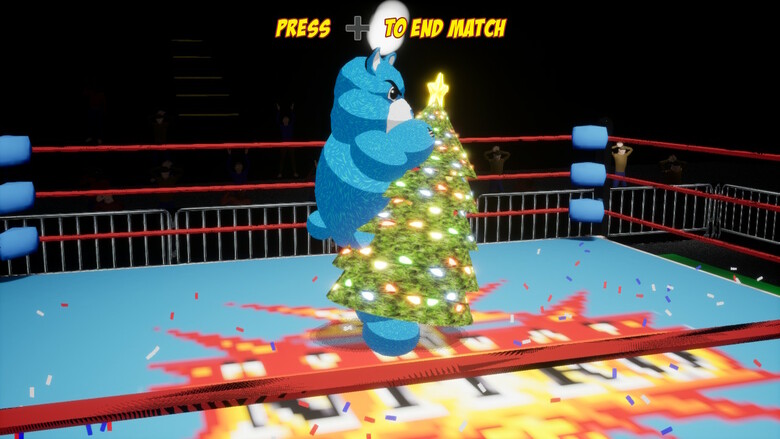 That sentiment is a good summation of AAW. There is a lot of enjoyment to be had, but it will only appeal to a certain audience, and may ultimately be impacted by their willingness to seek out user-created content. If you’re looking for a deep story with realistic pro wrestling action, AAW is not your game. That’s okay, though, as rich stories and simulated wrestling were never the intention of AAW’s devs. If you’ve got a hankering for the absurdity of Wolverine facing off with a Pepsi machine in the squared circle, however, then Action Arcade Wrestling may be right in your wheelhouse.