Your sweet tooth may be left dissatisfied... 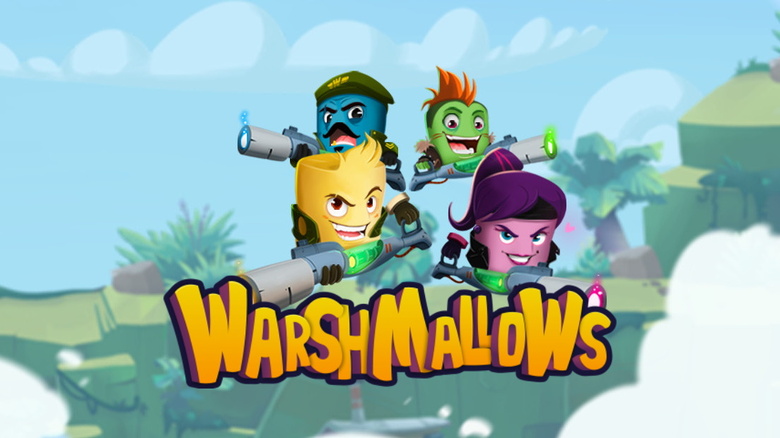 With the constant rush of new releases, it’s unfortunate, but understandable that some games will fall through the cracks, only to be noticed by a select few. Especially with major releases popping up all the time, more modest games often get less attention. Warshmallows is one such title, but the passion that the developers at You Run Ltd. have for their game is clear in many aspects, even if some other areas fall short. The balance Warshmallows has between positives and drawbacks is what I thought of most during my time with the game. For each great element I found, there was another that didn’t live up to the same standard.

Warshmallows is a casual, 2D platform-battler starring cute, marshmallow-shaped fighters. In the game, the goal is to shoot and slap your way to a quick, chaotic victory— if you’re fast enough! The game offers a good array of guns to foster different fighting styles, and the mechanics are simple to learn with some room to grow. It’s not exactly a complex game, but it has unmistakable charm and promise.

The first thing you’ll notice in Warshmallows is the presentation, with the soundtrack in particular standing out. The main title theme is genuinely great, and I’m not exaggerating when I say I listened to it for a solid 15 minutes. Likewise, the battle music is very solid, and fits the gameplay well. 80’s-style guitar and drum beats really help drive the game’s quick skirmishes. The graphics, which are cute, yet detailed, give each “Warshmallow” a unique design that packs a surprising amount of character into each bite-sized fighter. The level of detail, however, leads to perhaps one of the most prominent drawbacks of the game: the stages. The stages are massive and hold a ton of detail, and as a result, they absolutely dwarf the characters. There were times when it was difficult to see where my character was, or where I should be shooting. Having such tiny characters running, jumping, and climbing around huge stages gets confusing, and even frustrating at times. 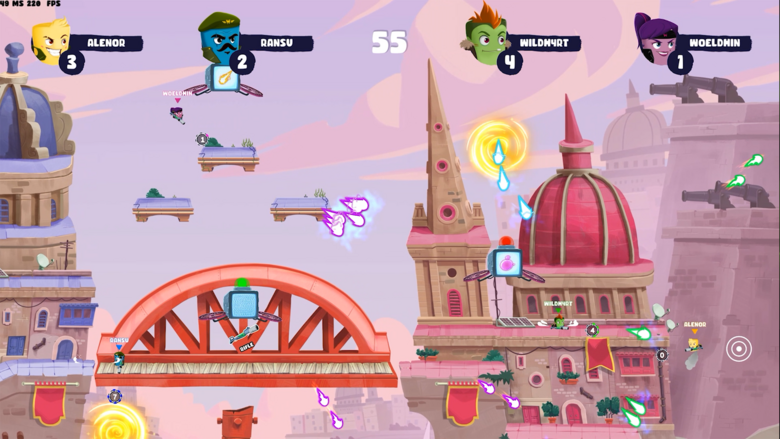 Tiny characters traverse a massive arena, which can get confusing.

As for the gameplay mechanics in Warshmallows, there’s certainly potential, but the experience is a bit of a mixed bag. Movement feels very solid, with a triple-jump that lets you move around in creative ways, bolstered by a limited amount of flight that furthers your reach. With combat, the main draw is the bullet-time feature. Since Warshmallows is a one-hit-kills experience, any bullet that gets close to you or an opponent will slow down time, allowing for a chance to get out of the way. While unique and interesting, this effect can be slightly jarring, as everyone is slowed down regardless of who is in danger. When you combine this with the large stages, things can get very hard to follow, and the hectic nature isn’t always fun. It’s this juxtaposition of solid mechanics and irksome elements that make Warshmallows tough to get into. 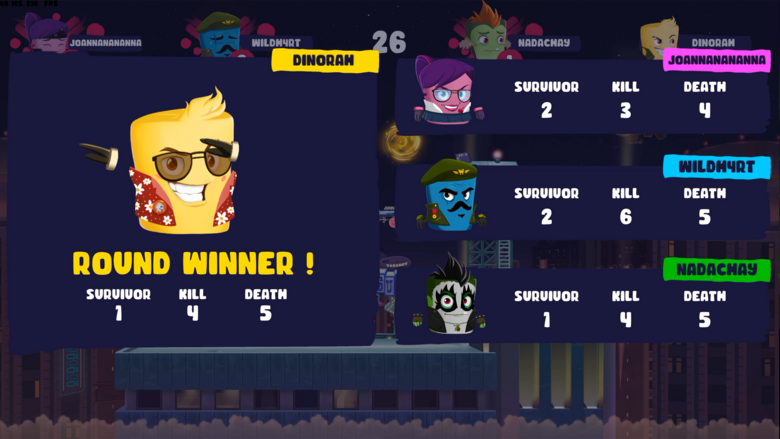 The victory screen shows off your cosmetics.

Again, my time with Warshmallows highlighted the fact that every positive was followed by a drawback. There’s a solid progression system in place, but the rewards are sometimes underwhelming. The online play works great, but the format of needing to win 5 rounds can drag on. This isn’t to say that Warshmallows is a bad game by any stretch. In fact, it shows a lot of promise, and the developers are still working on it. However, as it stands now, the good in Warshmallows is hindered by equally rough patches.