Swords & Bones Review: Not Much Meat on the Bone

Gonna end up a big ol' pile of them bones 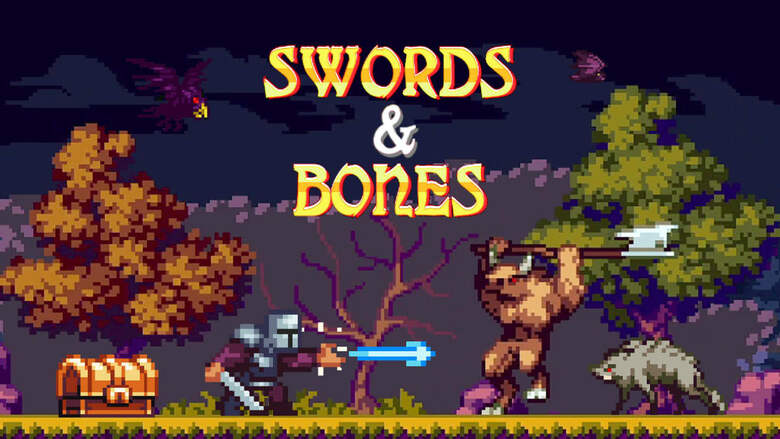 Many games these days are inspired by classics of the 8-bit or 16-bit era. They attempt to tap into nostalgia while improving on dated mechanics, all in the hopes of creating an experience that feels like a game you enjoyed in the past. Some of these games succeed, while others ultimately fail to make their mark. Swords & Bones is another of these retro-inspired side-scrolling action platformers vying for a spot in your Nintendo Switch library.

First impressions can sometimes be deceiving, but with Swords & Bones, they may prove true for the whole package. The menu screen is minimalistic, with three selectable choices, none of which are labeled. The story is told through poorly translated text containing grammar and spelling errors. It’s mostly an afterthought, and is the usual “you must stop the evil being who took over” trope.

Story shortcomings can be overlooked if the gameplay is fun and engaging, as many of the 8-bit and 16-bit games have proven. Swords & Bones is broken into 5 stages, each featuring 10 levels and a boss battle. Each of the 5 stages take you through different environments like caves, a castle, etc. The goal in each level is to make it through to the end, and possibly collect a hidden trophy along the way. In fact, if you want to see the “true” ending, you’ll need to collect all of these hidden trophies. 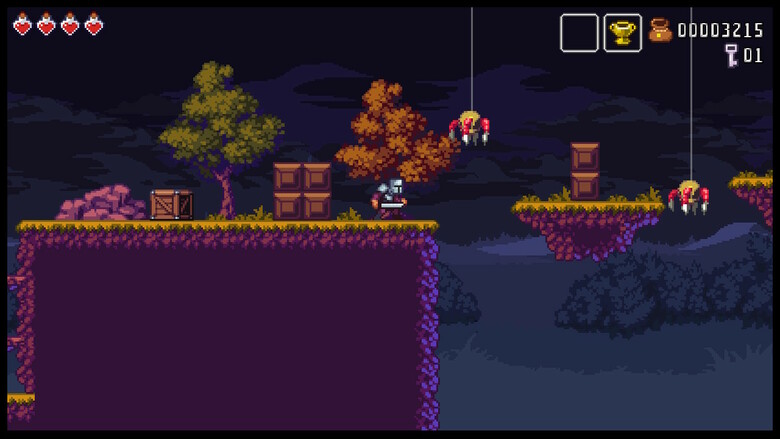 At the game’s start, you’re given just 3 hit points to survive pitfalls, enemy onslaughts, and more. Thankfully, you can purchase a bigger reservoir of hit points by collecting money from fallen enemies. Exchange your hard-earned cash via an in-game shop that not only offers the aforementioned health upgrades, but other power-ups as well.

The gameplay is pretty standard fare, tasking you with jumping between platforms and swinging a sword at enemies. The jumping feels fine, and the unlockable double jump is useful. There isn’t much weight behind sword swings, which is made worse by enemies that simply flash when an attack connects. This leaves battles feeling rather unsatisfying. Additionally, some enemies can take up to 5 hits to defeat, which leads to a lot of hit and retreat tactics. Complicating that process is the lack of a duck option, which forces you to either run from or jump over every projectile. 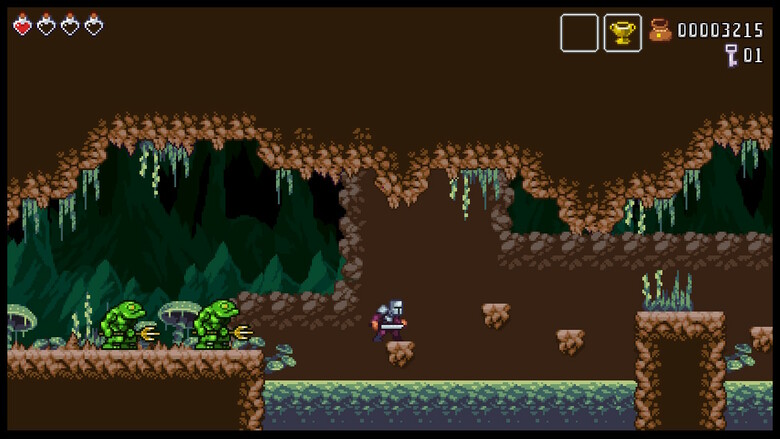 Not surprisingly, your limited maneuvers can cause you to take a fair amount of damage. There is an invincibility effect after you take a hit, but it’s so negligible that you end up losing multiple hit points in a row, leading to cheap deaths. Fortunately, there is no knockback effect, which could have caused added angst when making some of the game’s tough jumps.

Enemies in Swords & Bones are introduced rather gradually. While this allows you to learn their attack patterns, the placement of some foes can be quite frustrating. Multiple levels have enemies that will pop out or attack as soon as you jump onto the next platform. There’s even some levels where an enemy appears right before the end, and one false move can cause you to fail the entire stage. These enemy placements lead to a gameplay loop that eventually becomes nothing more than memorization-based after multiple failed attempts. Thankfully, the levels are pretty short and the game reloads quickly, so multiple attempts don’t take long at all. In fact, the entire game is over in a blink, with my review playthrough lasting roughly 2 hours. This final total includes my time spent collecting all trophies to see the true ending, which ultimately wasn’t a satisfying payoff. 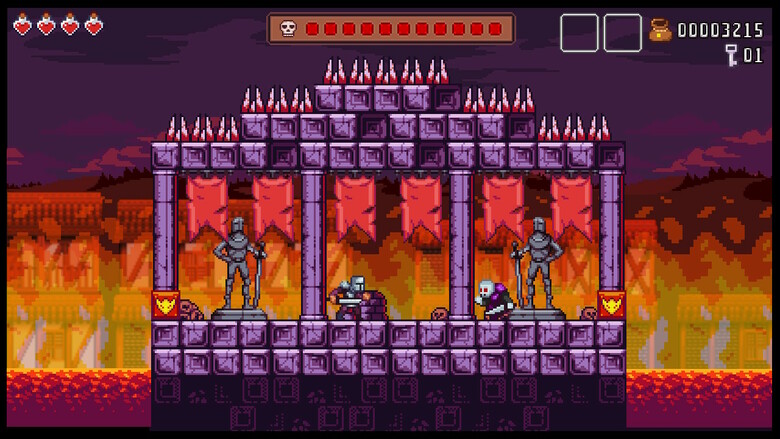 As for presentation, Swords & Bones aims for the 16-bit era, but it honestly looks and sounds closer to 8-bit. The pixel art is adequate and some enemy design is pleasing, but most of it is quite generic. The music, unfortunately, is of the same caliber. Each of the 5 stages has a different song, but the likelihood of any tunes sticking in your head after playing is extremely low.

Sadly, the forgettable nature of Swords & Bones’ soundtrack aligns with the entirety of the game itself. It isn’t a bad title, but the gameplay isn’t enjoyable enough to shine through the occasionally frustrating enemy placement and lackluster presentation. Swords & Bones attempts to recreate an experience inspired by our favorite 16-bit action platformers, but there are other modern examples that do everything this game has to offer, albeit in more interesting and successful ways.