About an Elf Review - A Story About Stories 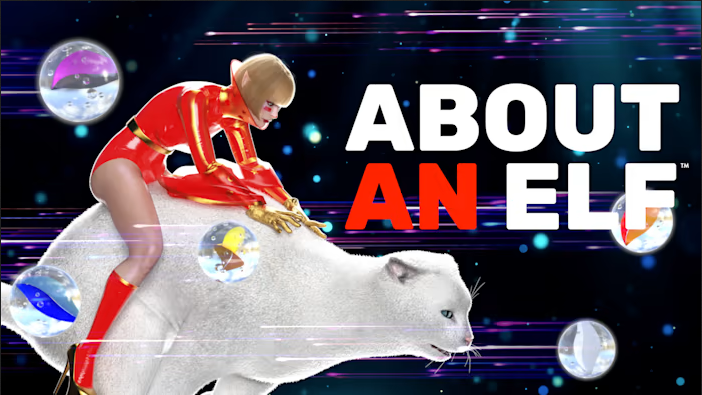 Video games as a medium for artistic expression isn’t anything new. The idea dates back decades and decades, with countless games being used to tell stories, express abstract concepts, and share the inner workings of inventive minds. It takes a certain kind of game, however, to push the concept of art to its limit and beyond. About an Elf, a game by the small team at Meringue Interactive, does exactly that. It serves not only as an enjoyable experience, but a total deconstruction of what a game is. This unique journey is presented with a great, flashy style as well, making for a game that I consider a must-play for those willing to embrace the unexpected and absurd.

About an Elf, as described by the dev team, is a deeply complex mixture of elements. At its core, it’s most similar to a visual novel. You follow the self-proclaimed magical Elven princess Dam, alongside her trusty hero-in-training Roland the BraveCat, on their journey to restore the Elven race to their former glory, and bring about the Elftopia. On your adventure, you’ll travel through a number of truly bizarre realms, decipher strange crystal visions, and use Magiballs to battle ferocious monsters that dole out gummy bears upon defeat. It all sounds quite absurd, doesn’t it? It should, because that’s the whole point! 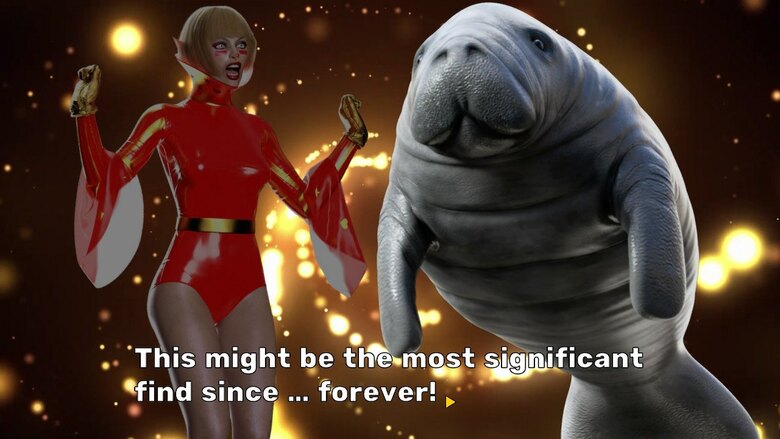 Every single piece of this strange, twisted puzzle is intentionally arbitrary. The aforementioned gummy bears you collect are never really explained, but do they need to be? They’re just like any other collectible currency in a game. You gather them because they make your counter tick up. How about the hidden manatees in the game? No explanation, no story hook; not even a passing mention. A lot of things have no apparent rhyme or reason to them, and that’s the beauty of it all. About an Elf has all the staples of a narrative-driven game, but the developers clearly didn’t feel the need to expound on everything. In doing this, you slowly realize the abject absurdity of other games doing the same exact thing. Even with the outlandish nature of it all, About an Elf offers up beautiful bits of poetry to help paint the many inane events in a new light.

Even the obstacles you come across are, in the end, completely meaningless. Just when things start looking dire, a ridiculous deus ex machina sweeps all your problems away. About an Elf isn’t ashamed of this, either, and nor should it be. You never feel cheated out of any satisfaction, because you learn early on that there aren’t any stakes. Instead, the twists and turns of the game provide your motivation through intrigue. You don’t know what’s going to happen next, or how anything will come to be. In this way, the story of About an Elf keeps you on your toes and maintains your interest throughout. The story in and of itself isn’t meant to make sense. Instead, it aims to be a complete dissection of video game storytelling in general. 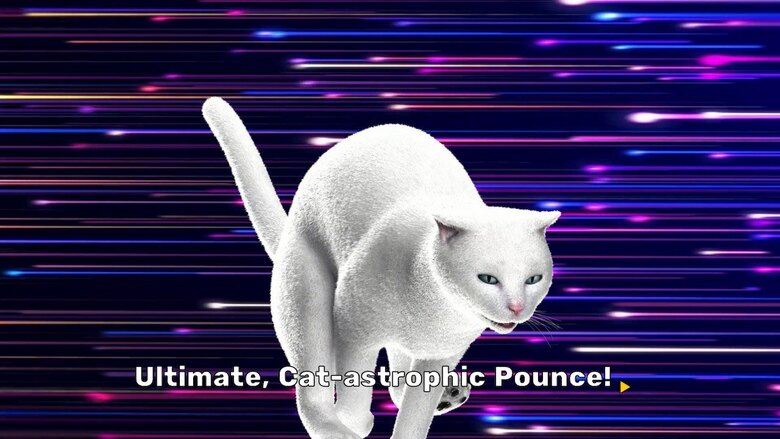 Just when all is lost, enter Roland the BraveCat.

I would be remiss if I didn’t acknowledge the elephant in the room: the game’s visual presentation. About an Elf is just as nonsensical in its appearance as its mechanics. The character models give off a rather uneasy feeling, to the point where you can’t tell if you’re viewing real people draped in preposterous costumes, or the result of some sophisticated 3D modeling. When a character is in focus, their model swivels back and forth ever so slightly, which adds both depth, and a modicum of disturbing realism. For as weird as it is, this style works extremely well when paired with the game’s bright colors, abnormal backgrounds, and odd situations. The amount of detail put into About an Elf’s visuals, from enemy designs to landscapes, creates a vibe similar to that of an intense fever dream.

The game’s soundtrack serves as the cherry on top of this one-of-a-kind sundae. Each area has a distinct tune that adds to the overall aesthetic, tying together the avant-garde package into a cohesive experience, despite all odds. 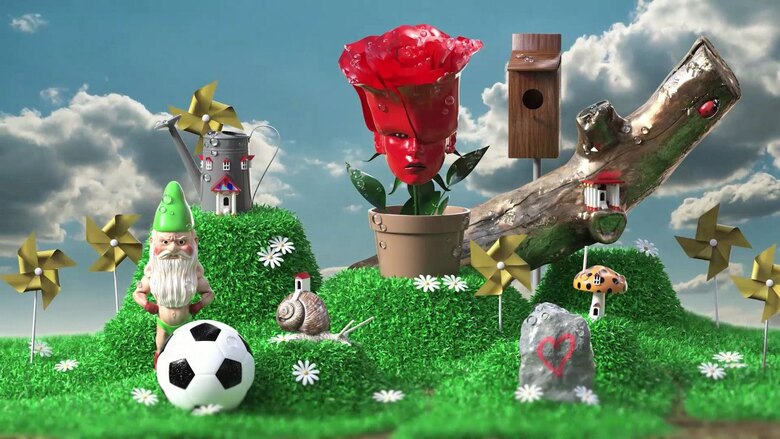 How do you even caption an image like this?

Just like every other aspect of About an Elf, gameplay is extremely quirky, while also unabashedly simple. In terms of mechanics, you’ll do little more than point your cursor at objects to investigate them. If an enemy appears, you’ll tap on them to initiate a battle. Navigating fights, while still straightforward, involves using your crystal vision ability. For example, during combat, if you see an image of flickering lightning, you know that your electric Magiball is needed. If you see a fish, you choose your water Magiball. The crystal vision symbolism is pretty cut-and-dry early on, but as you make it deeper into the game, the associations become much more wacky. What Magiball should you use when you see a cow? It’s not the light Magiball or fire Magiball, but instead it’s Isaac, the Magiball of space. On its surface, this sounds absolutely insane—and that’s because it is! Battles, just like gameplay overall, aren’t meant to be engaging in the traditional sense. Instead, the clear goal of About an Elf is to challenge what gameplay really means. This is explained perfectly in-game by Princess Dam, who says…

“The point is not to have gameplay, but to challenge the very notion of what gameplay is.”
—Princess Dam

When all’s said and done, the game isn’t just About an Elf as the name implies. This is supposed to be a dissection of games as a medium. About an Elf breaks down what it means to play games, along with what being a game actually entails. On the surface, About an Elf comes off as a silly, nonsensical adventure. At its core, the game crafts a story about stories. It speaks to the way we consume games, and then shoves in our faces what we usually take for granted while playing. This is what made About an Elf an experience I won’t soon forget, and one I heavily recommend. 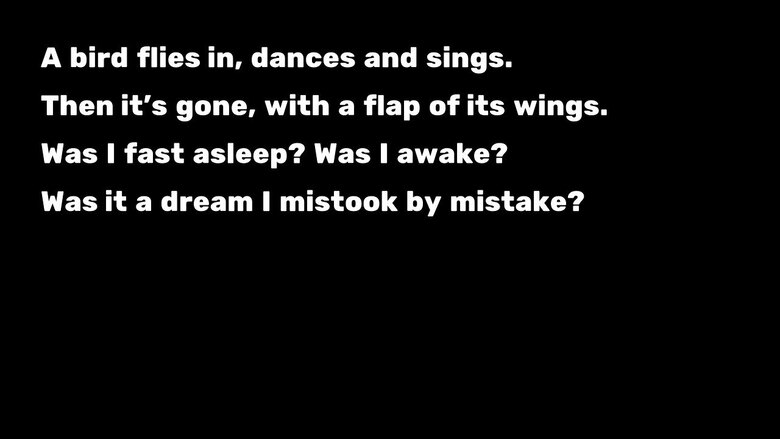