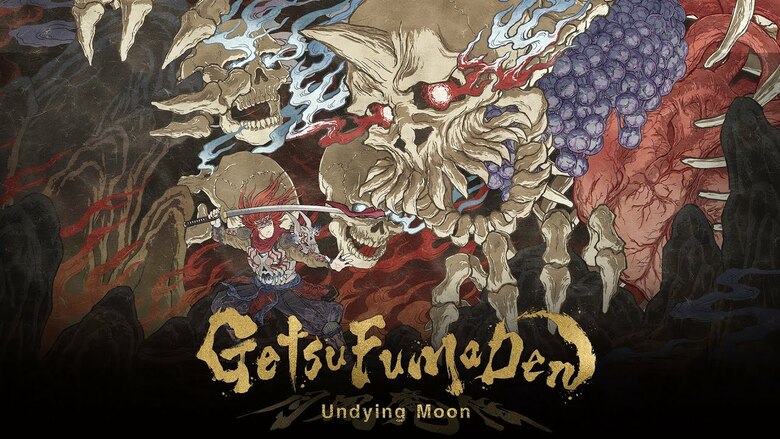 I was so excited by the reveal of GetsuFumaDen: Undying Moon, which came from a Nintendo Indie Showcase nearly a year ago. I loved seeing Konami breathe new life into a classic IP, especially since it was something beyond their usual compilation of classics. The original GetsuFumaDen is an early Famicom Disk System game released in 1987, and it remained mostly dormant until the Virtual Console releases on Wii, Nintendo 3DS, and Wii U. All of those releases were exclusive to Japan, until now. Included as a bonus in the “Digital Deluxe edition” of GetsuFumaDen: Undying Moon, Switch owners the world over can now see what the original game is all about.

For those who played it, the original GetsuFumaDen is remembered as something of an oddity to classic Castlevania fans, as it’s a similarly-themed game from the same developer. That said, it’s also a very forward-thinking mashup of genres. Throughout the adventure, you’ll enjoy top-down exploration, side-scrolling action, 3rd person behind-the-back labyrinths, and combat similar to Mike Tyson’s Punch-Out!!. Now the classic pioneer is back in the spotlight with GetsuFumaDen: Undying Moon, a new side-scrolling, roguelike action-platformer in the series.

While GetsuFumaDen: Undying Moon’s gameplay is anything but unique in today’s gaming landscape, the art design is still wholly original. Immediately, you’ll notice eye-grabbing characters, enemies, and environments that use a striking combination of 3D cel-shading and watercolor painting to create a layered look. In screenshots, the game is absolutely beautiful. In motion, things are even more visually stunning, making it hard to peel your eyes away. This is GetsuFumaDen: Undying Moon’s biggest strength and most blatant selling point. The dedication to the bold art style remains true through menus and the hub area as well, where you can find a handy bestiary that lets you fully appreciate those stellar enemy designs outside of combat. 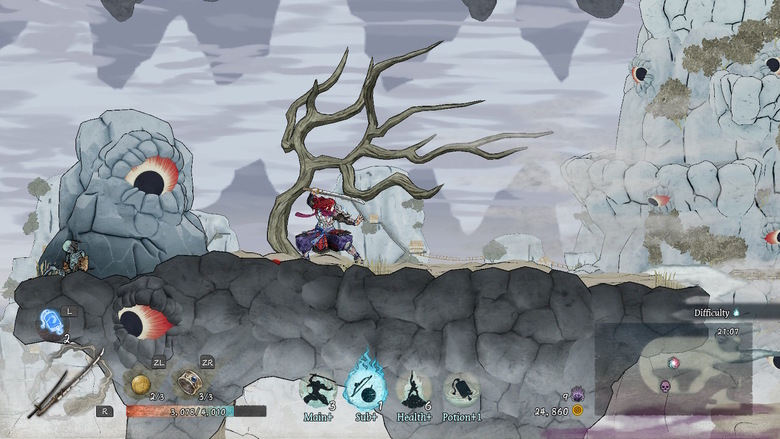 The hills have eyes 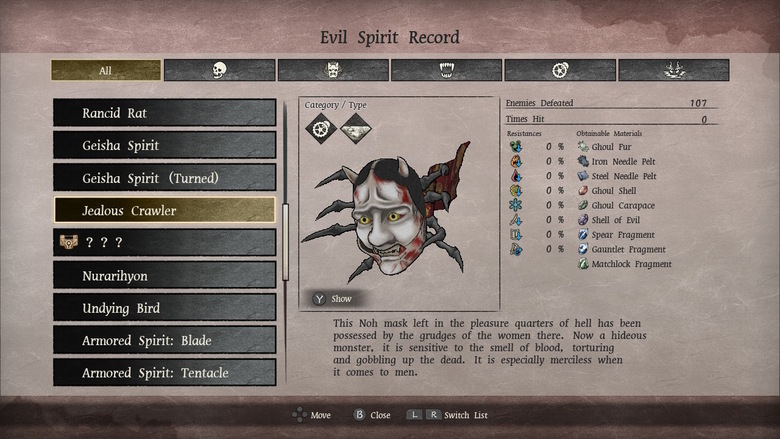 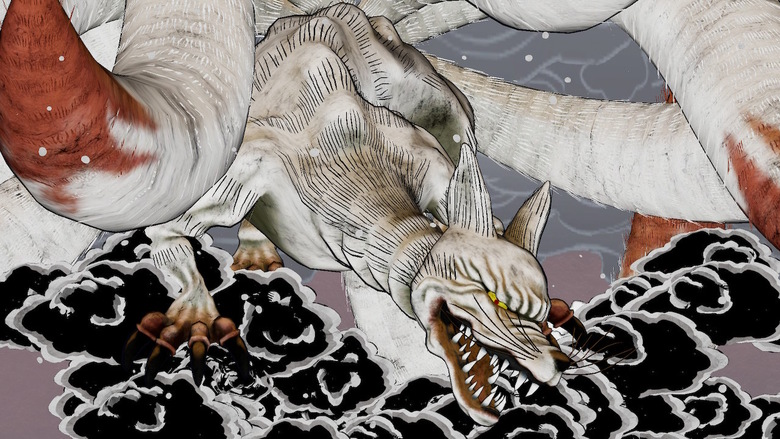 Moving into the combat, GetsuFumaDen: Undying Moon finds a balance between the more flexible combat engines of the later exploratory Castlevania titles, and the more thoughtful, committed gameplay popularized in recent “Souls Like” titles. The main character, Getsu, has a rather weighty-feeling jump mapped to the B button, coupled with what could be gaming’s most underwhelming double jump. The Y Button offers a basic attack that can be chained 2-5 times based on the equipped weapon, but it’s important to note that you’ll be quickly punished for attacking foes head on. Most enemies don’t flinch easily, which makes canceling basic combo strings with a jump or dodge (A button) a crucial tactic. The dodge roll in particular, with its invincible nature and mid-air capabilities, is extremely helpful.

Tipping the scale a bit further in your direction is the special attack. By pressing X, you can unleash a special move tied to the type of weapon you’re holding. For example, my preferred weapon class was the default Katana, which lets you perform a defensive parry that also deals damage. This special attack is a lovely compliment to the side-arms (bows, guns, and bombs), which are activated by the shoulder buttons. These side-arms have a limited “ammunition” that refills on a cooldown timer. While you can use side-arms quite effectively from a distance, they’re also great up close, allowing you to bridge basic combos together by canceling your last normal attack into a sub-attack. Last, but certainly not least, Getsu can perform an in-air stomp by pressing down and the jump button. This is one of the most useful techniques in the game, allowing you to stagger many of the larger foes, paving the way for a swift takedown.

While I have high praise for the combat’s intuitive nature, I can’t say the same of the rogue-like/lite mechanics. The game doesn’t introduce these elements at a digestible pace, but rather throws multiple explanatory, mobile-like text boxes at you during a very short tutorial level. Many of these explanations barely scratch the surface, barely detailing how these mechanics should be utilized. Here’s a quick breakdown of what I managed to glean from my time with the game.

Blue Souls/Soul Devour - Souls collected around each map from large treasure chests, and enhanced purple enemies. These fill up the blue flame icons in the bottom-middle of the screen, and can be cashed in for stat upgrades or potions during your current attempt only. (I suggest upgrading health the most, since it is the most useful by a large margin.)

Weapon Rank/Purple Souls/Money - Purple souls are scattered across each map, and you’ll find them lingering near corpses. These gruesome collectibles are used with the coins dropped by enemies to upgrade your main and side weapon ranks, resulting in more damage and perks.

Materials/spirits/weapon - Treasure chests and enemies can offer green and yellow spirits, as well as various crafting materials. The spirits are used to upgrade stats and gain extra perks, while the materials are used to forge new types of weapons, and unlock weapon specific skills.

Trained Skills and Secret Arts - Although you lose the spirit currency needed to purchase these after death, if you manage to buy them during a run, they are permanent.

Forged Weapons - Blueprints found from enemy drops can be used to forge new, permanent weapon types. Once again, the materials needed to build these are lost upon death. Once forged, new and stronger weapons will appear in future playthroughs.

Unlocked weapon skills - These weapon-specific perks are unlocked with the final materials dropped upon death. Once these are acquired, they’ll be permanently available to unlock for a specific weapon at each of a zone’s weapon shops, costing 1 purple soul each..

Even though I’ve finished the game, the above mechanics are still tough to explain. Once you do grasp the concepts, they make for an engaging, fun gameplay experience.

You’ll need all of these skills to handle the game’s enemies; a praiseworthy group due to their extremely varied visual and battle attributes. Alongside an assortment of intimidating humanoid oni demons, the game has a wide breadth of imaginative creatures, such as specters who conceal parts of the screen with a thick smoke, or the hideous, 8-legged Noh mask, a possessed creature that splits its face in half before striking. These enemies all look fantastic, but some of their attacks, especially after initially encountering them, aren’t very well telegraphed. This can definitely result in cheap-feeling hits made worse by the fact that dying results in a restart from the beginning. The good news is that once you learn enemy attacks, you’ve pretty much mastered them, as each enemy has just one method of offense. 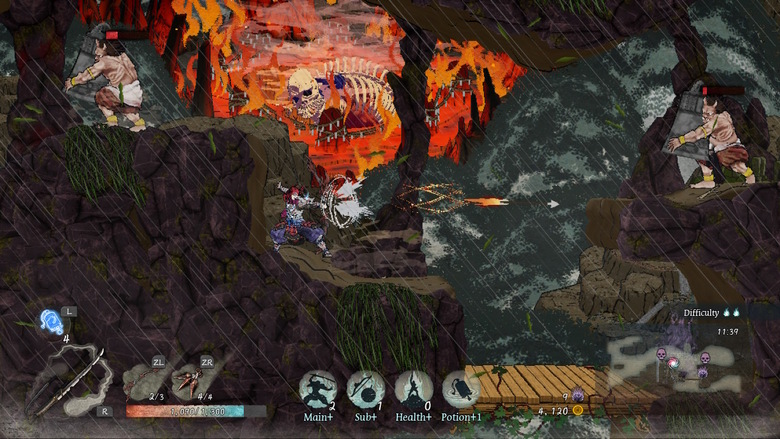 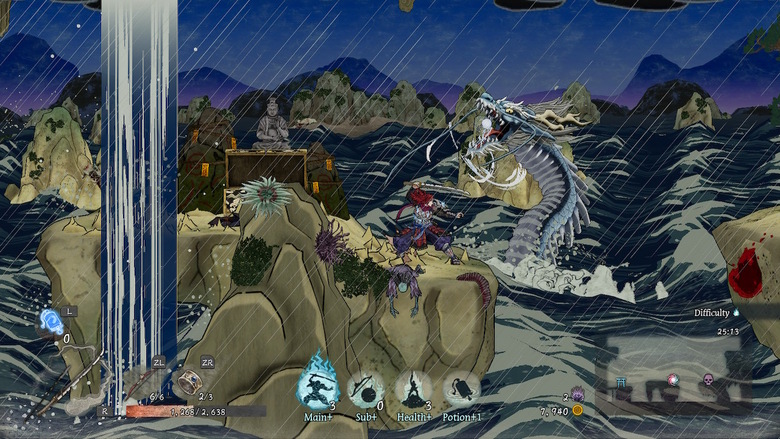 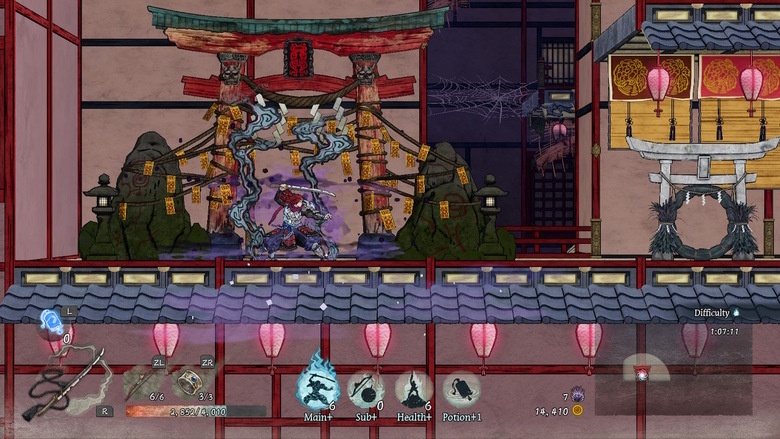 The more peaceful front half of the Japanese city level.
View All

Enemies are placed in extremely varied, randomly-generated biomes, each with their own unique challenges and gimmicks. One region sees Getsu platforming among rocks suspended over enormous tidal waves. This area has many enemies designed to push you down to the bottom portion of the stage where an enormous, invincible water serpent awaits. This creature will spew projectiles at you as you desperately try to scramble back up the rocks to relative safety. Another biome uses the foreground and background to create a dangerous maze, where one half is a safer, Japanese-influenced street front, and the rear section is an enemy-infested, dimly lit alley. Despite being surprised and delighted by the level variation, I did find it odd that the first two areas look almost identical. Couple this with a very challenging second boss, and I could imagine less patient players getting burned out very early on.

Speaking of bosses, they’re truly a spectacle to behold. Each is prefaced with a brief cinematic that puts their art and design on full display. These range from multi-headed water hydras to colossal fire centipedes, all of them exemplifying tough-but-fair battle scenarios. All bosses have numerous attacks and unique arenas, complete with multi-tiered stages that make verticality and movement an important part of the showdowns. Gameplay-wise, these sequences are the highlight of the game, and it’s great to see Konami’s creative monster designs presented with such attention to detail. My only wish is that there were more of them! I counted just shy of a dozen in all; but they do seem to change patterns and aggressiveness in repeat playthroughs with the difficulty dialed up. 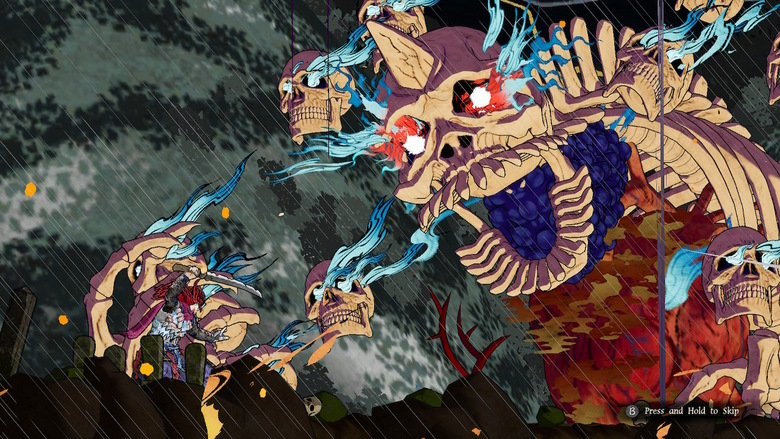 The skeletal boss from the backdrop. 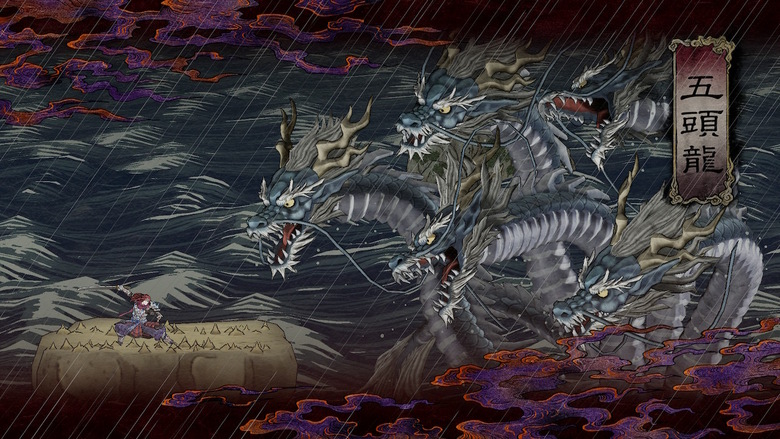 That water serpent used a water stone and evolved into a Hydra! 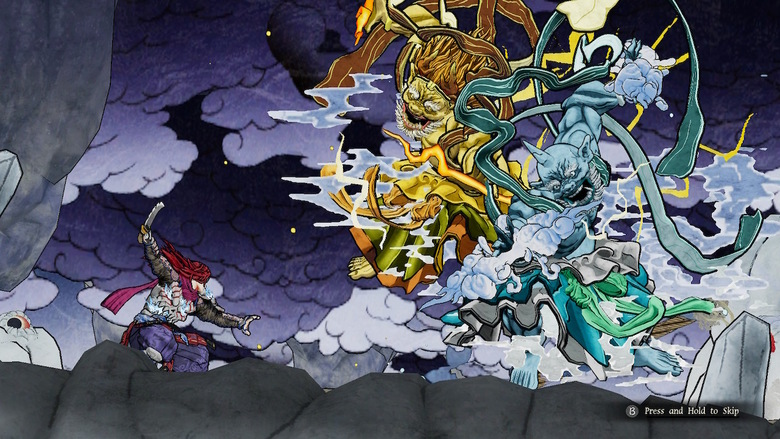 Difficulty is something GetsuFumaDen: Undying Moon nails. I consider myself extremely proficient in these types of 2D action games, having beaten most of the major staples throughout gaming’s history. Despite completing my first cycle through the game in a single sitting, I was definitely challenged along the way. Once I thoroughly came to grips with the gameplay quirks and upgrade systems, I finally forged my path to victory. After beating the game on the harder of the 2 default difficulties, I was awarded the “Hero” option, which lights up just 2 of the 6 hands on the hub area’s difficulty selection statue. It seems that anyone looking for maximum replayability through difficulty will find plenty to engage with here.

Upon completion of GetsuFumaDen: Undying Moon, I was left wanting more bosses and stages, which is a testament to the game’s quality. That said, I can’t shake the feeling that this game wasn’t quite optimized for Switch hardware, as it runs at a stable, but low 30 fps. This feels a bit disappointing for a side-scrolling game in 2022. Still, I’d say for the game’s intended target audience of rougelike/2D/classic Konami fans, it’s absolutely worth looking into. I won’t say it stands toe-to-toe with the best the genre has to offer, but it is a beautiful, fun, and challenging option for the gamer who’s played them all. For the larger gaming audience that doesn’t normally play side-scrolling roguelikes, I’d suggest hanging back until there’s a decent sale.