Corpse Party and Neptunia have a very horrifying child

This review is spoiler-free, and only covers story events that happen within the first hour or so of gameplay.

Horror games are a very hit-or-miss genre for me. I find many of them to be too much to handle, thanks to the constant jump scares, and an emphasis on “loud noise = scary.” It’s the tense, atmospheric horror games that are more my speed. Give me something where your terror stems from not knowing what’s lurking around the corner, rather than from a giant scary monster chasing you.

Death end re;Quest 2, a collaboration between Compile Heart (Hyperdimension Neptunia) and Makoto Kedouin (writer and creator of the Corpse Party series), fits nicely into the former category of horror games. A mix between visual novel and JRPG, Death end re;Quest 2 tells a somewhat macabre story throughout the roughly 12 hour adventure. 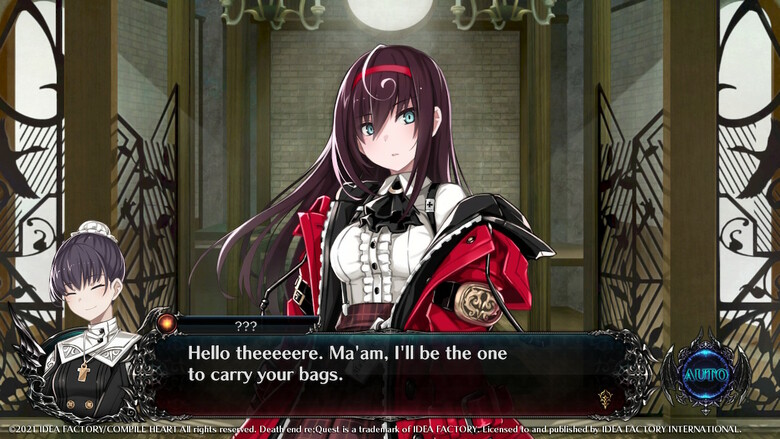 Mai upon entering Wordsworth for the first time

You play as protagonist Mai Toyama, a new transfer to Wordsworth, an all-girls orphanage nestled in the quaint, rural town of Le Choara. Mai’s story starts off in a shocking manner, as you learn that just before heading to Wordsworth, she murdered her alcoholic, abusive father in a fit of rage. Soon afterwards, Mai sets out for Wordsworth to find Sanea, her little sister who disappeared after sending a cryptic message. Fueled by determination to find her sister no matter what, Mai’s story takes her through a series of unimaginable, horrific events that completely change her view of the world. 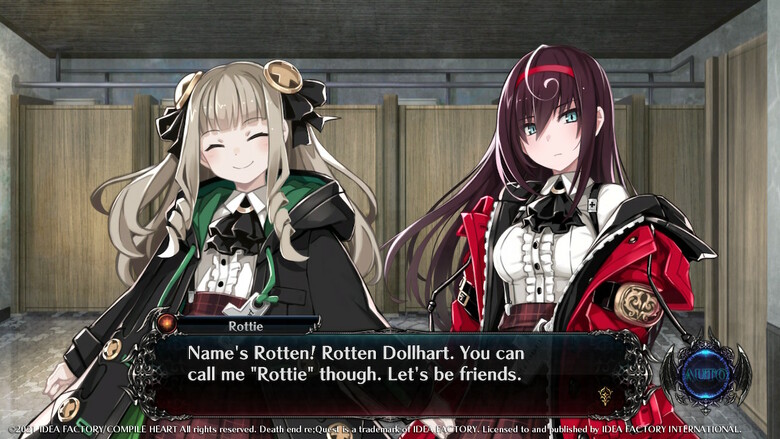 Mai gains quite a few allies in the quest to find her sister, chief among them being Rotten Dollhart (Rottie to her friends); her roommate, and the daughter of Wordsworth’s owner. Upbeat, chipper, and friendly to everyone, Rottie is the opposite of Mai, and their relationship blossoms just as you’d expect.

The story of Death end re;Quest 2 takes place over a long period of time, and similar to the Persona series, you experience the events day by day. During the morning hours, you wander through a series of menus that represent the various floors and locations of both Wordsworth and Le Choara. This is where you’ll chat with, and grow closer to the other residents of the orphanage via a series of visual novel events. While a neat concept with a few stand-out characters, I eventually found myself skipping these scenes in favor of heading right into the real meat of gameplay; JRPG dungeon-crawling. 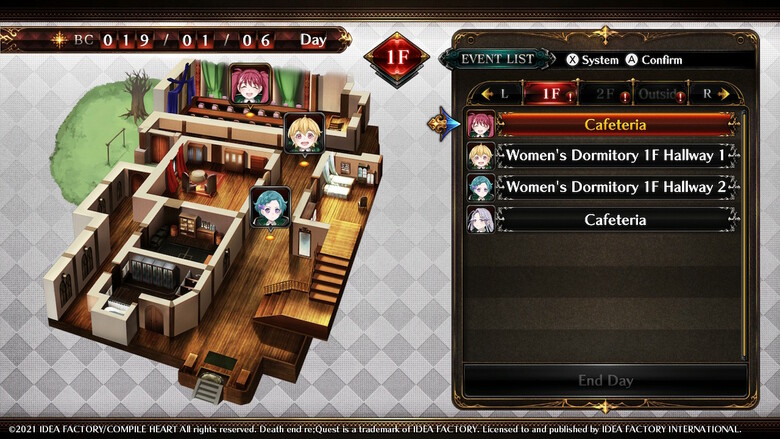 Death end re;Quest 2 also includes “Death Ends” events, which is a mechanic Corpse Party fans will be quite familiar with. While working your way through the game’s story, you can make what is essentially a wrong turn, which results in your entire party dying and a Game Over. There are plenty “Death Ends” to find, and some people might have fun hunting down all of these alternate endings.

Scenes like these lead to all sorts of chilling moments, and the game isn’t afraid to get gruesome with them. While you usually don’t see the horrible fate you or other characters have met, the game certainly makes you listen to them. In the first couple hours of gameplay alone, I witnessed two scenes where characters died slowly. These moments included characters screaming in agony, along with sounds of the murder weapon as it sliced and diced. Anyone who is sensitive to that kind of material should be very cautious when considering Death end re;Quest 2.

When not creeping you out, Death end re;Quest 2 offers JRPG sections very similar to other titles from Compile Heart, a company who specializes in making games in this genre. The basic gameplay loop involves wandering through the streets of Le Choara at night, which is transformed into a twisted, shadowy shell of its daytime self. 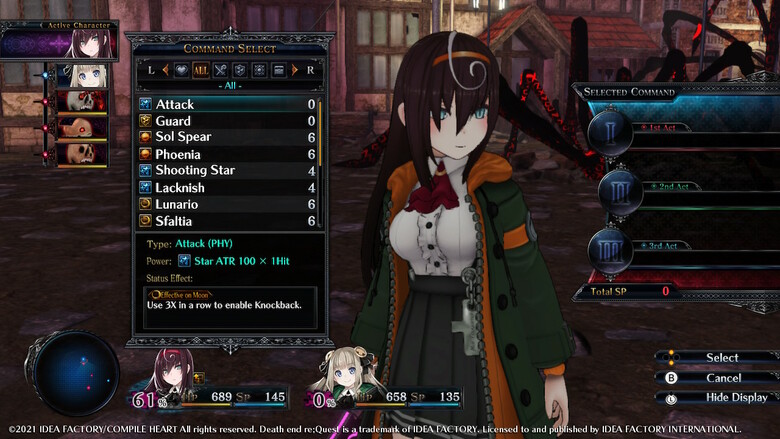 A multitude of spells, each with their own range

Monsters known as “Shadow Matter” roam the streets during this time, but thankfully, the protagonists are well equipped to handle them. Mai and her compatriots come to discover that they’re “Adepts,” people capable of not only seeing these horrifying creatures, but fighting back against them as well.

Each protagonist also has a special ability they can use in the field to move things along. Mai can hack into PCs and gain access to security cameras, giving her a look at what lies ahead, be it a roving group of Shadow Matter, or a hidden passageway. Rottie’s special ability allows her to hover over gaps and walls that are blocking the way, a technique that proves absolutely necessary in progressing.

As you work your way through Le Choara, battles are bound to happen. These play out in an open field, allowing you to move around as you see fit. Each character can choose up to 3 actions per turn, and chaining these together often earns you benefits, such as knocking enemies back, or the discovery of a new move.

While moving around the battlefield may seem a bit unnecessary at first, doing so pays off. Each attack a character can use has a specific range, which is represented by red, green, and blue markers that appear in front of them. Getting as many enemies as possible in the range of your attacks is the key to victory.

Alongside that, the field also contains powerups in the form of glowing circles scattered about. Touching these circles raises a stat, or restores a certain amount of HP or SP. Finally, battling also builds towards filling the “Corruption Gauge,” which eventually lets a character utilize their “Glitch Form,” a version of the character with higher stats, and a special finishing move. 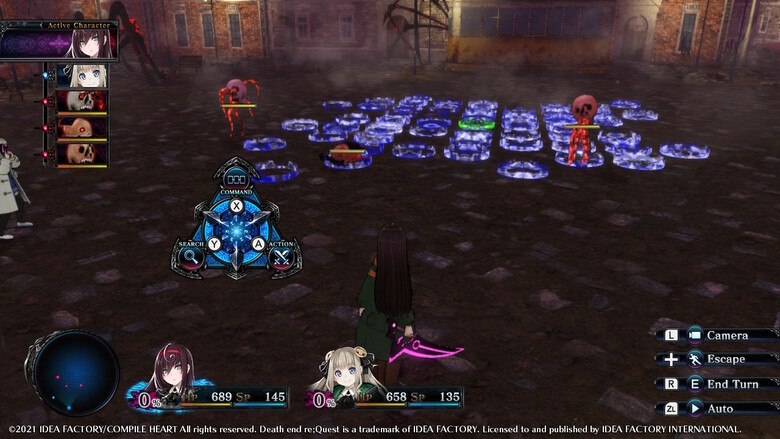 Another important element of combat is the “Overkill” system. Doing damage to an enemy past their total amount of hit points will cause them to take Overkill damage, and this damage can stack up to 10 times. The more you overkill an enemy, the more experience and rewards you earn once the battle wraps. Overkilling enemies is actually quite easy to do, making it well worth your time.

It’s worth noting Death end re;Quest 2 on Switch includes every piece of DLC released for the original versions of the game. Many of the items included in these DLC packs can make battles an absolute breeze. You’ll have access to overpowered weapons, extremely helpful accessories, and even a few fun costumes for your party. If you’d rather fly through battles to focus on the game’s story, using these DLC goodies is the perfect way to do so. Personally, I found myself using a few of the DLC items to help speed things along in the slower parts of the game.

While plenty of DLC made its way to the Switch port of Death end re;Quest 2, another area seems to have suffered. The game’s performance is rather lackluster, with the frame rate taking a painful hit during the JRPG sections. Simply wandering through the streets of Le Choara cuts the game’s normal frame rate to about half. Death end re;Quest 2 isn’t very graphically intensive, either, so I can’t quite figure out what’s causing the performance to take such a nosedive. 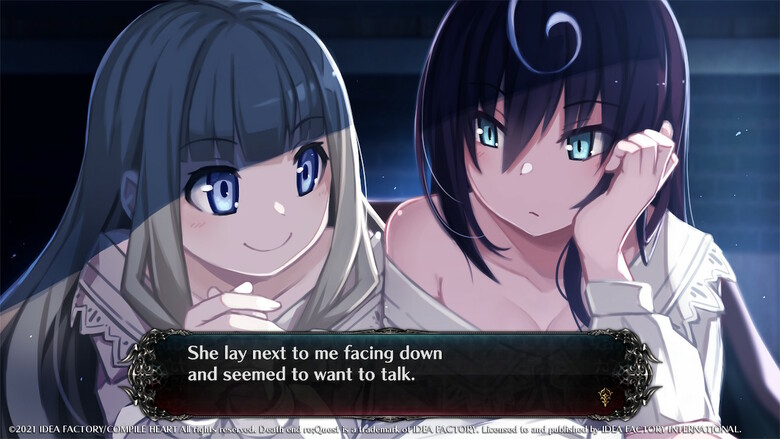 Just a couple of besties

Outside of performance issues, which I certainly hope will be fixed by a patch down the line, I found Death end re;Quest 2 quite enjoyable. Battles were engaging, the dungeon-crawling felt interesting and kept me invested, and the story is both well-crafted and unsettling. If you’re at all interested in horror games or JRPGs, I would definitely recommend taking a look at Death end re;Quest 2. While some might be put off by the graphic nature of the content, if you can handle that approach, you’ll find a game worthy of your time and effort.