Once you read the 1,000th word you can start singing 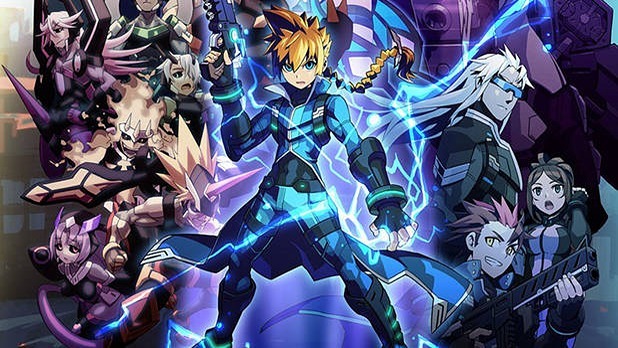 Time for a shocking confession. When Azure Striker Gunvolt was first revealed, the first thing that came to my mind, and probably almost everyone else’s, was “this looks like a lot like Mega Man”. That was a mistake, and I’m not talking about the typo. I’m sorry. If you are almost everyone else, you should apologize too.

Now that almost everyone has been forgiven, it’s Gunvolt’s turn. Gunvolt rose to prominence in Mega Man’s absence, which cast a shadow over the franchise. Living in Mega Man’s shadow has both helped and hurt Gunvolt. The original Azure Striker Gunvolt grabbed people’s interest at the perfect time, and its relative financial success owes a lot to its abstract connection to Mega Man.

Unfortunately, I continually witness the same tragedy unfold: someone plays a Gunvolt game because someone told them something along the lines of “it’s like Mega Man.” That unsuspecting person then plays Gunvolt expecting it to replace Mega Man, to fill the robot platformer void in their soul, and comes away disappointed when it doesn’t do the job. Hard to imagine something as devastating as someone not liking a game as much as you do, but I assure you it does happen.

The time has come to shine a light on the shadow over Gunvolt. We are four games into the Gunvolt series and on the cusp of the fifth – at this point he clearly stands on his own merits. More importantly, he has been taking steps away from Mega Man’s shadow since day one.

I’m not saying that Gunvolt and Mega Man share no similarities. That gut instinct that I and almost everyone else had upon seeing the game was rooted in some truth. Gunvolt shoots things and is blue, after all. Gunvolt draws from Mega Man’s in many ways; it just often swerves that inspiration into wildly different directions. 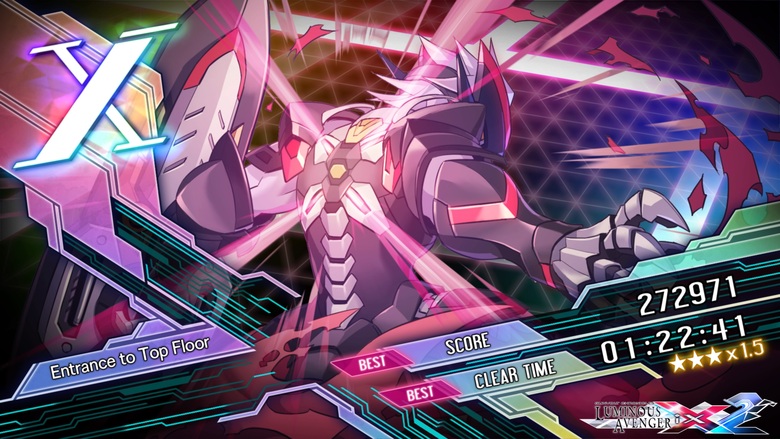 One of the most obvious ways Gunvolt moves away from Mega Man comes from its focus on scoring. Mega Man aficionados may recall that Mega Man technically started as a scoring game. The original Mega Man was both the first, and for the most part the last, Mega Man that involved earning points. It even had dedicated collectibles that existed purely to boost your score. Scoring was completely dropped in the ensuing games, only to be revisited in the later in the X series as well the Zero series. Notably, however, the ranking systems in those later games was based purely on your performance - how fast you completed a level, how fully you completed your objective, how little damage you took. It was less about integrating score into the game so much as using it as a tool for measuring how well you played.

Gunvolt games resurrect the direct implementation of scoring into the game design. They actually merge the scoring into the experience on a level far beyond what the original Mega Man was doing. Enemies in Mega Man games are hindrances and obstacles to be overcome. In Gunvolt, enemies are opportunities. Chaining your kills together simultaneously or finishing them with different weapons grants score bonuses. A key aspect of the game then becomes figuring out how to best maximize your points in each encounter. Some of the games contain optional pickups that further boost your score. There are even secret bonuses that can be obtained by fighting enemies or completing tasks in specific ways. The opportunities to increase your score are numerous and prominent.

Scoring further rockets to prominence due to how Gunvolt treats game mechanics like health and dying. Your ability to survive marks a major difference between Gunvolt and Mega Man. Mega Man punishes you in a straightforward manner – you get hit, you lose health. You lose all your health, you die. You get hit by something particularly pointy, you can skip the first step and just die. Gunvolt prevades this traditional aspect of game design by allowing you to avoid damage, either through the prevasion mechanic itself, which allows you to phase through enemy attacks, or through other methods like healing or resurrection. What you can’t avoid is the damage to your score. You get hit enough, you inevitably lose your score. 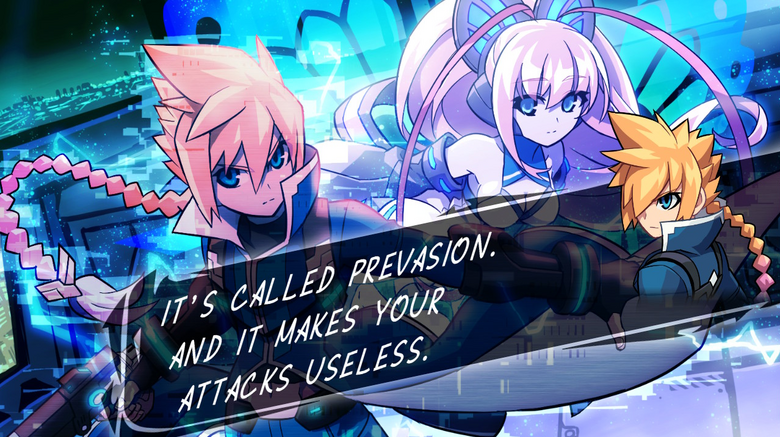 This aspect of Gunvolt completely changes the feel of the game. Knowing that you always have the option to survive in your back pocket makes it difficult to see Gunvolt games as pure platformer challenges in the vein of Mega Man. The developers have instead taken that seemingly throwaway scoring aspect of the original Mega Man game and supercharged it, resulting in a totally different beast.

Scoring doesn’t just affect the player psychology, this focus also reflects in the level design. Mega Man games are built with platforming as their foundation. The act of hopping from platform to platform and going from one end of a screen to the other while perfectly placed enemies maximize your frustration are arguably what those games are all about. Mega Man levels are perilous songs and you have to perform the correct dance to survive.

Gunvolt stages sing a different tune. Often literally. There are occasionally platforming challenges, I don’t want to downplay that, they just don’t set out to kill you most of the time. They mostly want to maim you, or at least your points. Enemies do not exist to perfectly knock you off a platform so much as to perfectly line up in a way that lets you get a triple kill score bonus. In essence, Gunvolt level and enemy design challenges you to maximize your points while also holding onto them. This process culminates once you hit the 1,000 point threshold and your trusty idol companion begins singing her song. If Mega Man stages are music to dance to, Gunvolt stages are anthems where you slowly build up momentum through efficient scoring.

Nowhere is this difference in philosophy more apparent than the boss designs. When it comes to where each series packs the brunt of its challenge, I’d say for Mega Man it’s in the stages, while for Gunvolt it’s with the bosses. Mega Man bosses are usually simple and quick in design. Many times you can brute force through them even if you don’t have the pattern down. If the goal in Mega Man is to survive, bosses usually won’t be the ones giving you the most grief. Gunvolt bosses are much more intricate affairs. Each boss has multiple phases with an evolving arsenal of attacks, including mandatory desperation moves. You can technically survive just by the nature of the game mechanics, but getting out of them unscathed is no joke. Holding onto your points by the end of a boss fight is a challenge far beyond carrying them through the stage. 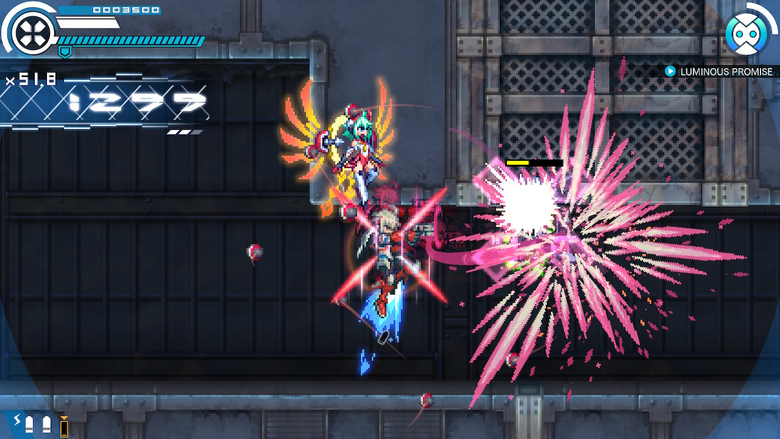 While dealing with the relentlessness of the bosses, you will also be relentlessly assaulted with dialogue. The world of Gunvolt contains an extensive amount of story, lore, and characterization. So much so that it can’t help but spill out at virtually every moment of the game, whether you’re playing the levels or reading the visual novel-esque cutscenes. This stronger integration of narrative may be the single most philosophical difference between Mega Man and Gunvolt.

Speaking of philosophy, a wise philosopher once said “Mega Man and story are practically enemies.” Someone probably said something like that any rate, I don’t know if they had a degree in philosophy or even who they are. I may have made this person up. Still, I understand the made-up sentiment even if I don’t fully agree with it. When people talk about story in games, generally they mean it in terms of traditional storytelling. The plot, the dialogue, the structure of the tale and how the game conveys it. On that level, Mega Man stories are usually thin and perhaps you could even say they get in the way of the fun.

Still, the stories in Mega Man aren’t as throwaway or otherwise antithetical to the experience as they might seem.

Mega Man stories build the mood. There’s an emotional quality to them that triumphs even when logic does not. Sometimes the stories lean towards cheeky fun, yet more often Mega Man games tell subtle tragedies. Robot heroes constantly find themselves stuck in endless fights against enemies that may as well be their friends or family. The day may be saved at the end, but rest assured a new battle will arise tomorrow. Expertly crafted character designs and music sell the impact where traditional storytelling does not. Mega Man stories, characters, and worlds connect on an emotional level above all else. It just isn’t the kind of series you go to for clear-cut lore, world building, or answers.

I often feel like people fruitlessly get hung up on odd bits of Mega Man lore. In reality the developers of the original runs of Mega Man games never even saw it as a universe that needed explicit and well thought out worldbuilding. The X games were essentially treated as a “what if” to the original universe, and neither series was meant to be beholden to the other. A similar attitude was taken with the Zero series and how the X series continued as if the developments in Zero never happened. Any connections are fun details, they were not meant to be “canon” or endlessly exposited on. As new people get involved I suppose some day that can change, but I would not be surprised if the people at Capcom still saw things that way to this day. 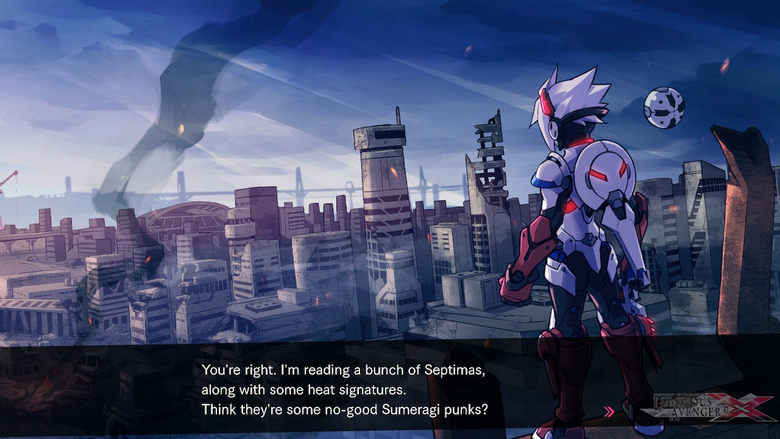 That’s where Gunvolt changes things up. All of the lore people want from Mega Man exists for real in Gunvolt, down to clearly laid out multiversal shenanigans. Inti Creates clearly pushed Mega Man in a more fleshed out, comprehensive story direction during their tenure with the Zero and ZX series, and with the Gunvolt series they finally accomplished that vision.

Everything in Gunvolt feels like it was crafted with purpose. The writers behind the series could probably tell you every little detail about every character and world building concept they throw out in the games. The largely optional yet dense amount of dialogue present in the games makes the world and levels come alive in ways that Mega Man titles would only ever hint at doing. Characters evolve, the stories have clear arcs and themes, everything about the world has explanations that you can read all about. There are a multitude of side stories and audio dramas, some officially available in English and some not, that further expand the universe.

Gunvolt and story are partners in both literal and emotional storytelling. The story permeates every aspect of the game as long as you let it. Gunvolt exists as an interesting chimera of the action game and visual novel. This deeper connection enhances and enriches the Gunvolt series in ways that you don’t see from any other platformer series, let alone Mega Man.

Which returns us to the premise: Gunvolt is not like Mega Man. The two series may always be connected by lingering traces of the latter’s shadow, but Gunvolt has firmly established itself as a separate entity. It focuses on different things, accomplishes different goals, and reaches different heights. That’s worth appreciating, even if it doesn’t fill the robot-platformer void in your soul. Perhaps instead, it may be worth making room for an angsty blue guy score-attack platformer void in your soul.