REVIEW: The Cruel King and The Great Hero - Straightforward and True 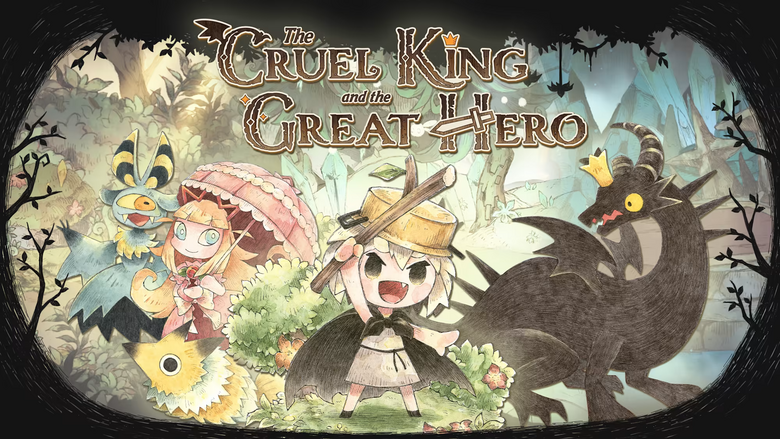 As we get older, we gain more perspective and understanding of the world around us. Decisions become more nuanced and morality grays. While this wisened perspective has advantages, it also makes it easier to overlook that often the simplest truth may be the best answer to our problems. Kids may not understand everything that goes on in the world, but they generally know what they want and what’s right. The Cruel King and the Great Hero crafts an experience based upon that straightforward, clear viewpoint of a child, resulting in a game that charms with its simplicity.

The Cruel King and the Great Hero embeds the art of storytelling into its very DNA, so I feel it would be appropriate kick things off by sharing an excerpt from the novelization of my review:

“The game frames itself around the aesthetic and narrative stylings of a picture book, perfectly matching both the viewpoint of child protagonist Yuu and the themes the game aims to convey,” said Jack, stating the obvious.

Jack continued to ramble: “Yuu lives with a giant dragon, which the player may quickly suspect is the titular Cruel King. She spends her time in a village of monsters, yet she dreams of being a great hero. She doesn’t seem to realize that may be a path that eventually puts her at odds with her current friends and family. Yuu doesn’t understand any of the backstories or greater politics at play in her world, and she doesn’t know why humans and monsters cannot coexist. Yuu’s naivety initially seems like a weakness, however her simple understanding that kindness matters above all else permeates throughout every aspect of the game.”

He just kept going on and on. The bewildered readers began to wonder if he would ever get to the point. This storybook narration gimmick seemed fun at first, but it was already starting to wear out its welcome. It definitely shouldn’t be carrying the whole review.

“Maybe I should cut this gimmick short. It was already a little obnoxious, and now it’s getting meta, too,” Jack wondered aloud. He decided to just keep rambling instead.

[JACK'S THE CRUEL KING AND THE GREAT HERO REVIEW: THE OFFICIAL NOVELIZATION]

That’s enough of that. The Cruel King and the Great Hero tells most of its story through similar narration style, and while it is far more charming, the simple nature of the story can at times make it feel excessive. It’s cute though, so that’s okay. If Yuu’s journey has taught me anything, it’s that a little patience and understanding can go a long way. 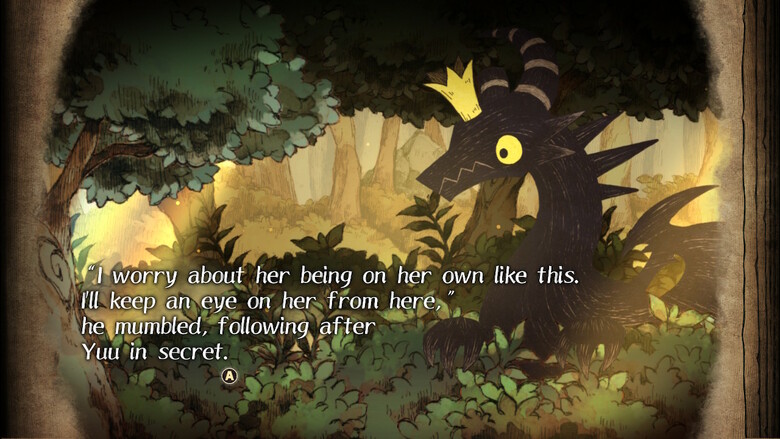 The Cruel King and The Great Hero complements its more laid-back story pacing with the framework of a turn-based RPG. Yuu’s journey flows back-and-forth between two states. In the aforementioned village of monsters, she can roam safely and chat up the locals. There’s a main story to follow, of course, but many of the monsters will have extra tasks that Yuu will volunteer herself for. A bunch of these quests tend to open up at once, so you’re generally spending your time in the village hunting down all the available tasks before heading out into the world to complete them.

Outside the village, the real game begins. The village connects to multiple locations that all essentially function as the equivalent of dungeons in a traditional RPG. Yuu must navigate to the end of these areas while collecting treasure and facing the ever present threat of random encounters with hostile monsters. Much like the narrative itself, the game structure is simple and straightforward.

The battle system matches that philosophy while retaining the fundamentals of what makes turn-based systems engaging. At a glance, you probably know what to expect: you can attack, defend, use items, or take advantage of special skills for added strategy. Nothing breaks the mold here. The battles shine nonetheless because they are intelligently designed to keep you on your toes.

Yuu won’t be walking out of most fights unscathed. Enemies pile on heavy damage, so prioritizing which enemies to defeat first becomes key. This isn’t a game where you can hoard items, either. You should always keep your health topped and cure status effects, as the tide of battle can turn more swiftly than you’d expect from such a cute game.

That isn’t to say the game’s difficulty will tax you too hard. You only have a maximum of two party members at a time, so your options are never overwhelming and the strategies for each enemy mob are intuitive to figure out. The game politely demands your continued attention is all; it avoids the trap some RPGs fall into where they let you turn on auto-pilot button mashing for the battles. If you do that, you’ll frequently put yourself in a worse place than if you had just focused and handled each encounter efficiently. For the most part, anyway.

I discovered that some equipment will automatically regenerate your party’s health each turn, which gives you a lot of leeway in making mistakes as well as ways to exploit enemies. If you know, for example, that an enemy is going to barely hurt you while defending, you can just sit there and recharge your stats back to maximum before finishing the battle, sidestepping the need for item use at all. Even these cheaper uses, however, involve a degree of thought to set up.

True to its storytelling roots, the game also expertly intertwines its narrative with its mechanics. At the start of the game, Yuu’s dragon dad follows closely behind her, often visible in the background. Yuu’s primary skill involves turning her “sword” (really a stick) into a flaming sword, which she unwittingly believes she is capable of, never realizing her dad is just behind her making it happen. Later in the game, you recruit a princess party member who starts severely underleveled and unable to fight, with her primary skill emphasizing hiding to avoid damage. As you progress through the area, she quickly levels up to learn actual combat skills and her confidence in the story grows in turn. Touches like these often realize the characters’ personalities and narrative beats better than dialogue itself.

It may seem like a contradiction for The Cruel King and the Great Hero to place so much emphasis on battling when the protagonist just wants to be kind. Thankfully, there is a little more to the system than that. Buried in the battle mechanics, there actually lies a more peaceful way to resolve things.

Virtually every enemy outside of boss encounters has a weakness to exploit. You can discover this weakness by picking “observe” from the skill menu – you essentially sacrifice your turn to receive some dialogue from the monster that hints towards their vulnerabilities. Sometimes that means hitting an enemy with a certain kind of attack, other times the solutions require some more creative thinking. Once exploited, the enemy enters a dazed state, and from there, you can just let them go free. 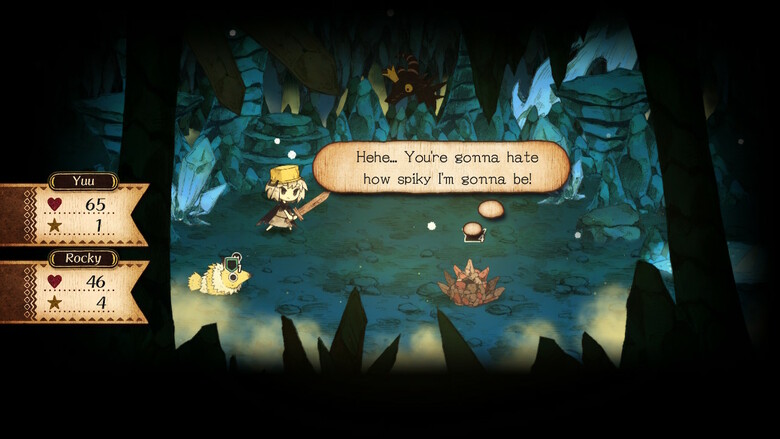 I can’t say if there’s any practical reason to do this. I did not encounter any obvious incentives to spare enemies outside of in-game achievements during my entire playthrough. I spared a lot of monsters, too! First and foremost, sparing enemies seems to be about pure and straightforward kindness, and maybe that’s how it should be.

Where the straightforwardness of the game lets the experience down is in the map design. Not the literal designs - the game looks gorgeous and the backgrounds are no exception. I’m talking about the actual game space you traverse through. I spent a lot of time talking about the battle system because that’s where most of the substance can be found in this game. Exploring the actual “dungeon” areas leaves much to be desired.

Basically, you always walk in a straight line. Either you’re holding left the whole time or you’re holding right. Sometimes the maps really mix things up and put the exit slightly above or below your starting position to add some verticality to the mix. If you look at the map of each area, there are technically branching and interconnected paths that make the layouts seem more elaborate. Moment to moment, however, you aren’t doing or seeing anything interesting. You’re just walking forward and fighting off random encounters.

Part of the problem rests on the movement speed. Whenever Yuu enters a new area, she moves at a tepid pace. At first this acceptably suits the universally relaxed mood of the game. About ten hours later, it gets old. I think this slower speed is intended to simulate the idea of approaching a new area with caution; on repeat trips where Yuu is stronger, she breaks into a sprint which moves things along at a far more tolerable speed. I appreciate the idea behind that. It’s an interesting approach to showing character growth. Still, I’d gladly accept Yuu prioritizing efficiency over safety. I handle the battles anyway, so I’ll take care of any extra trouble.

Running by default wouldn’t solve everything, of course. If I was just playing through the main story, the rudimentary map layouts wouldn’t bother me so much. What this issue really hurts is the side quests. I mentioned earlier that I stocked up on all of the available side quests before heading out. That’s due to the fact that if you’re going to be trudging through the same straight lines repeatedly, it only makes sense to get as much done on each trip as possible.

Most of the side quests are basically fetch quests. You go to an area to find a treasure chest or kill some monsters, and then return to the village with the spoils. I should note I generally enjoy the little stories and personalities that you discover from completing these tasks. Unfortunately, I can’t say I enjoy them enough to willingly re-enter the straight line gauntlet the amount of times the game wants you to.

While at first I dutifully completed everything assigned to me, near the end I just had to call it quits on the side quests. By this point, there were too many side quests asking me to do the same old song and dance in the same areas. Kindness clearly has a price here, and in this case I could not afford it. I like walking in straight lines as much as the next person, but I get enough of that in real life. These days I’m considering zig-zagging backwards through the neighborhood for some variety.

Still, it’s hard to stay annoyed at The Cruel King and the Great Hero. I like Yuu’s journey; the hope and optimism it contains in its narrative, aesthetics, and game mechanics offer a sweet and cohesive experience that I find appealing despite the gripes.

A simple approach naturally comes with positives and negatives. Much like a child’s understanding of the world, there will be some faults. However, simple thoughts represent ideals, and I think ideals are something that should be strived for despite the restraints of logic or reality. Yuu wants a world where everyone can live happily ever after, and that’s definitely a story worth telling and experiencing. 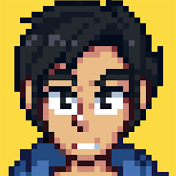