Years of alchemy shine through in this title 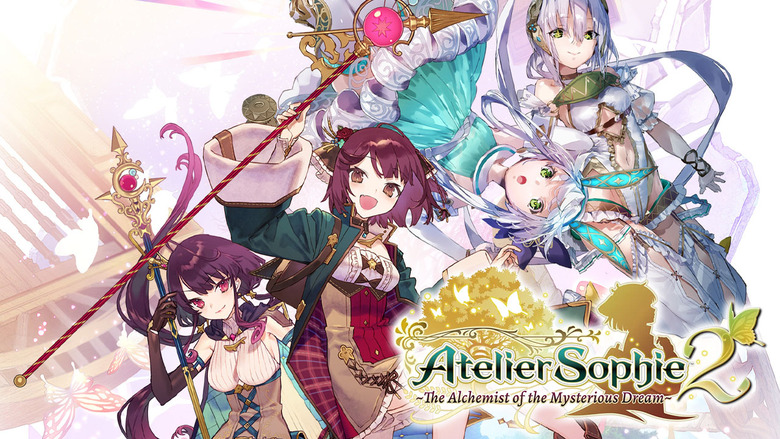 The Atelier series has a long and storied history, and has been going on for a lot longer than most people realize. Gust Corporation’s shining jewel of an IP, it began in 1997 and only started making its way to the west with the 6th entry in the series in 2004. Certainly, Gust Co. has had a long time to refine the Atelier franchise and its mechanics, and this shines through with the wonder and beauty that is Atelier Sophie 2.

If you never played the first Atelier Sophie, worry not. This game comes equipped with a quick recap you can watch before playing a new game to get caught up on the story of the first. It only goes over the broad strokes, but it’s enough of a recap that you won’t be lost coming into this one. 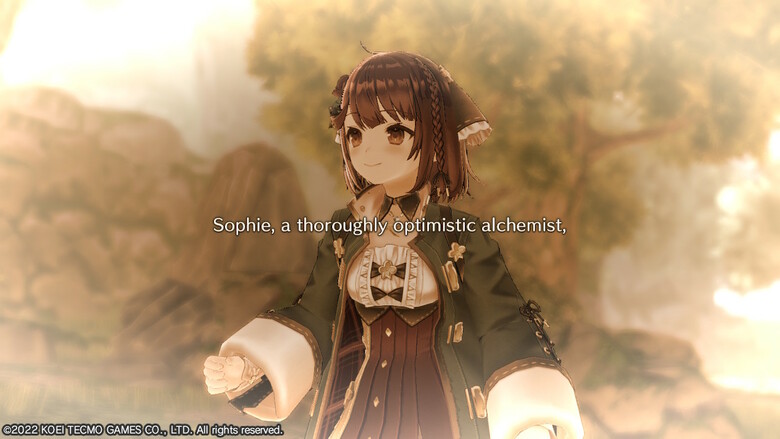 The story begins roughly where the first left off. Sophie, having recently left her hometown of Kirchen Bell, goes on a quest to see the world. Joining her in the quest is Plachta, the living book from the first game, now given the body of a doll to inhabit. Their goals are to help Sophie become an alchemist on par with her late grandmother, and to restore Plachta’s actual body, which was lost long before the two met.

Their plans are brought to a halt, however, when a mysterious portal opens up and threatens to suck Plachta inside. By way of holding onto Plachta and trying to spare her from this fate, Sophie is sucked in too, and finds herself in the dream world of Erde Wiege. Erde Wiege is soon revealed to be the world where those with big dreams are summoned, so that they might realize those dreams before returning to reality.

Upon awakening in this new world, Sophie finds that Plachta is nowhere to be found. From here, Sophie’s quest becomes a hunt for her friend so that they can leave Erde Wiege together and return home. 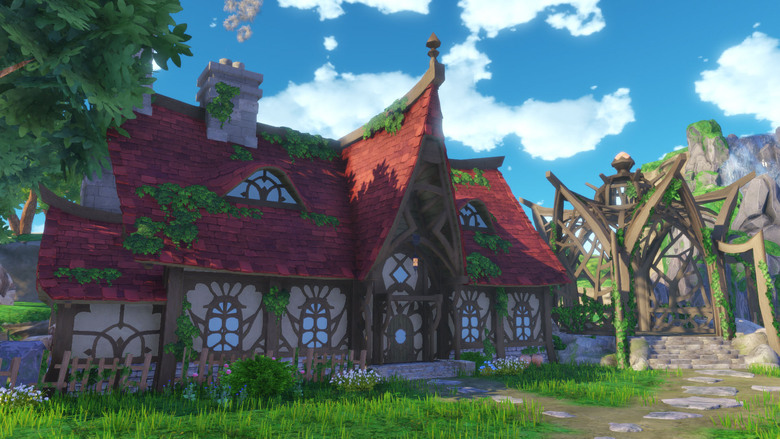 The atelier Sophie calls her home base in Erde Wiege

The world of Erde Wiege is as beautiful as it is vast, and definitely full of things to do and sights to see. The developers knew well that people would want to explore this world, as there are plenty of alchemy materials to find and enemies to fight packed within each area.

In addition, early on in the game, Sophie obtains the ability to control the weather of certain areas. With this power, landscapes can change in subtle, but impactful ways. New paths will open up, new alchemy materials will be ripe for the picking, and even enemies can change depending on the weather. 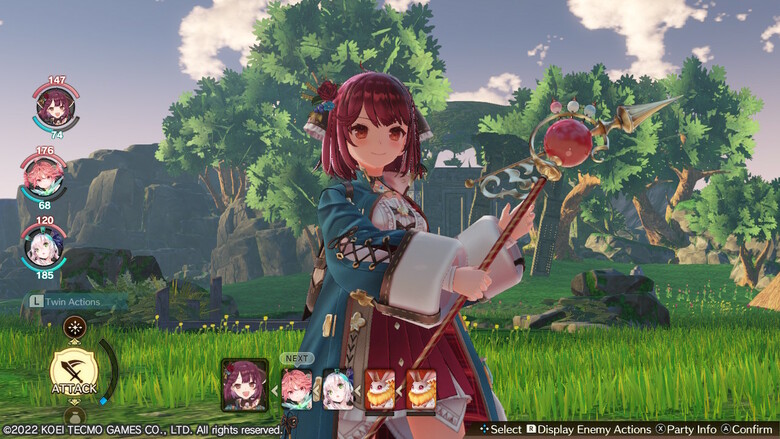 Speaking of enemies, battles are as finely-tuned as you would expect from a JRPG series that has been running for this long. Depending on your team composition, you can have certain characters waiting back on the sidelines, and from there you can have them participate via Twin Actions. Twin Actions are numerous, ranging from team attacks with whoever’s on the frontline, to having a team member in the back switch places with someone in the front, taking the hit for them.

Of course, any good alchemist knows that the items they craft are as invaluable in battle as any party member, and the way items work in battles highlight this nicely. Battles take place in a turn-based system where the upcoming turns are highlighted via cards at the bottom of the screen. Certain items will add themselves to this deck after use, gaining you another turn without input. This will happen continuously, and it triggers each time the same series of events plays out. 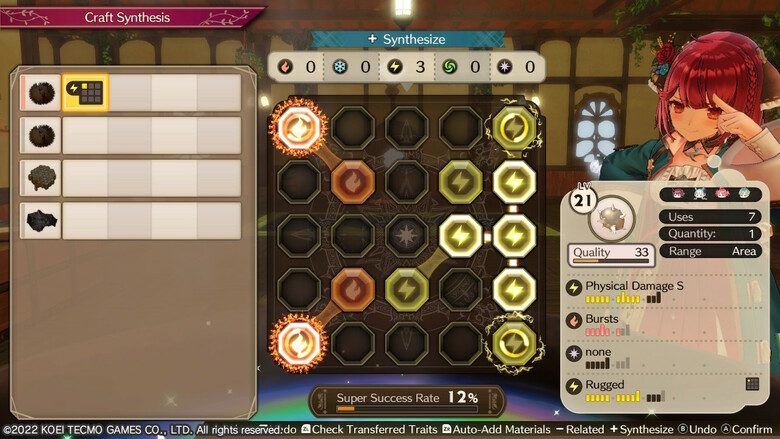 Of course, in a game about alchemists, the main highlight is the alchemy. You can find plenty of recipes for new items by doing various tasks around the world. These tasks include picking up a certain item a set number of times, talking to NPCs, and even standing in specific areas of the world for a bit. Once you have these recipes, it’s time to put them in the cauldron and craft them.

Crafting takes place on a 5x5 grid, with each item you add to the recipe having its own shape; not unlike Tetriminos or jigsaw puzzle pieces. You are then challenged to fit all these items onto the grid, forming connections where possible. Each item has its own elemental property as well, and if you link items of the same element together, the resulting item will be stronger.

If this system seems intimidating to you, let me assuage your fears. There is no way to fail making an item. Doing well in the alchemy system only improves the quality of the final product. You could place items on the grid with reckless abandon, and still end up with a perfectly serviceable staff or bomb. 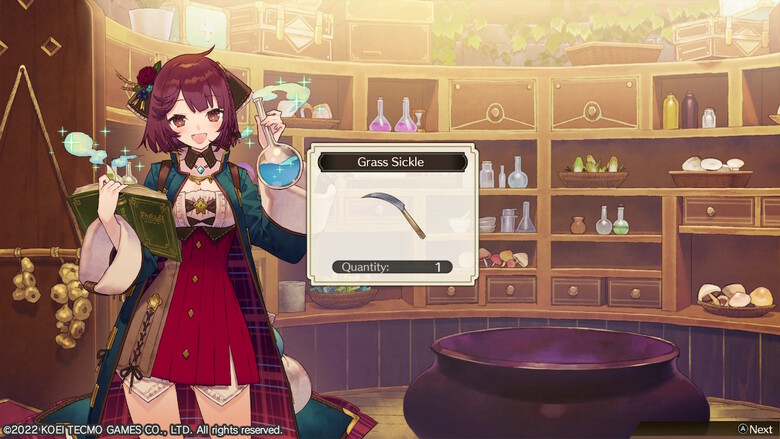 As with every Switch game, performance is on the mind. Thankfully, Atelier Sophie 2 performs rather well in docked mode. While pop-in and the occasional frame drop is still very possible, as a whole, the game runs rather swimmingly when docked. Handheld mode, however, is another story. Upon switching to handheld mode, you’ll notice stutters and frame drops abound, and the game as a whole will run at a much lower framerate. It’s unfortunate to be sure, but as long as you keep your Switch docked while exploring the fields and caverns of Erde Wiege, you should be fine.

Atelier Sophie 2 is absolutely beautiful from start to finish. The story, while not the most thought-provoking or innovative out there, will certainly leave you enthralled for the entirety of Sophie’s approximately 30-hour runtime. We won’t go into detail about the story to save the surprises and heart for everyone at home to enjoy, but just know that it’s well worth the investment. 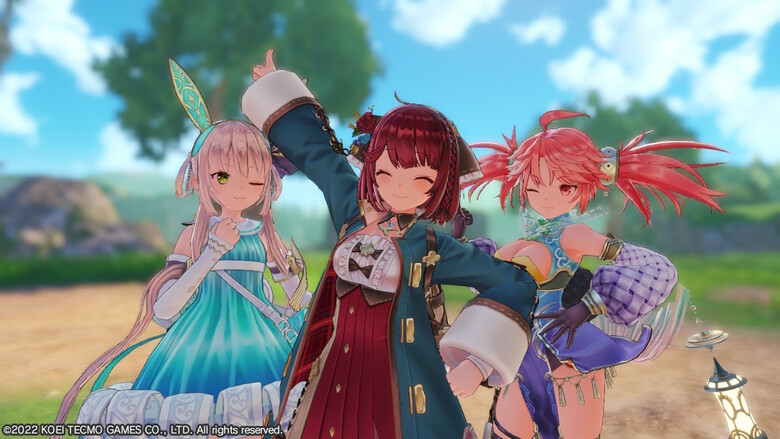 The girls hanging out!

The Atelier series is still going strong to this day, and nowhere is that better exemplified than in this newest entry. If you’ve ever had even a passing interest in the Atelier series, picking this up is highly recommended. If you’re a fan of JRPGs, and like the feel of building up characters, then this game is absolutely for you. You won’t be disappointed.