What Sunbreak lacks in quantity is made up for in quality 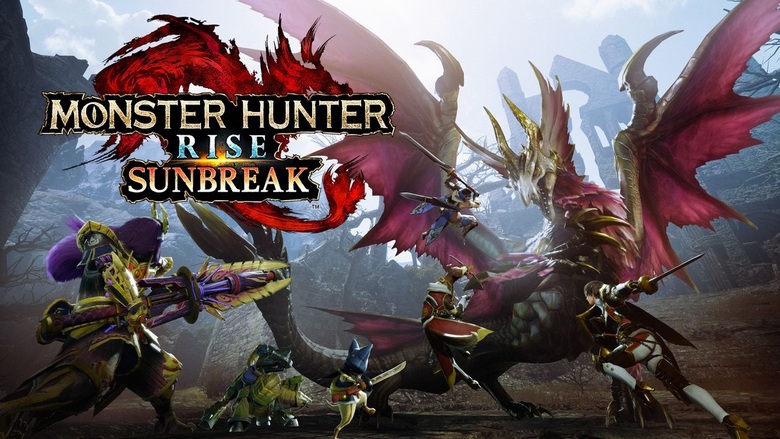 To start the new campaign introduced in Monster Hunter Rise: Sunbreak, you have to have already beaten the original game. So I’m going to approach this review under the assumption that, if you’re reading, you’re a Monster Hunter fan. If you’ve yet to play Rise, I would recommend it. Tackling gigantic monsters armed with only your blade and some allies is a ton of fun. But I wouldn’t let the new stuff in Sunbreak determine whether or not you should purchase the base game. You’ll still have to play through a big chunk of Rise to even touch what’s discussed here.

If you have beaten Rise and you want more, then Sunbreak is for you. Sunbreak offers a full second campaign for you to tackle. Now that you’ve helped out Kamura and made a name for yourself, a kingdom in peril has enlisted your help. You sail off to Elgado Outpost, a base built around the hole from which Malzeno, this game’s flagship foe, has emerged. From there, it’s your job to take down this dangerous foe and solve the mystery of his sudden reappearance via a series of epic battles against a wide variety of unique monsters. 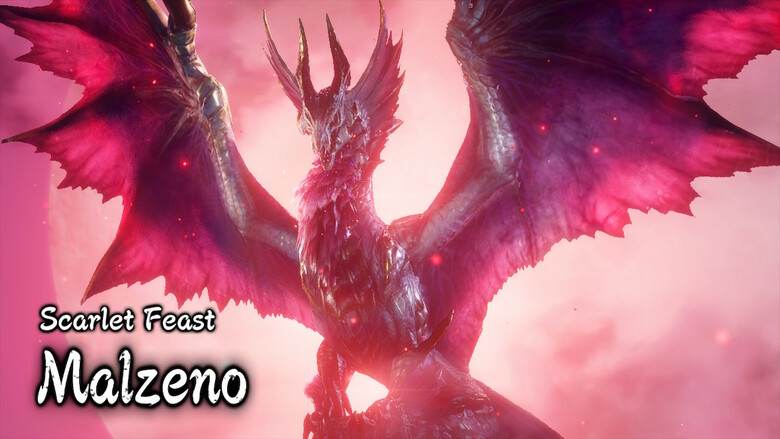 Malzeno is Sunbreak's flagship monster, and it may be the best flagship in the series

Before I get into those fights, though, which are definitely the main focus, I want to mention how much I love the new hub of Elgado. In contrast to the Japanese-inspired village that was Rise’s Kamura, Elgado is a clearly medieval-inspired locale. It’s built around a castle, it’s filled with knights, everyone even has a British accent. Monster Hunter has always done a great job of creating an immersive, stylish world, and I’m glad that Sunbreak, despite being an expansion, takes place in its own well-realized land that’s very different from that of Rise. Even the monster intros that play before you fight each one for the first time take on a vastly different style here.

The hub is better from a gameplay perspective, too. Instead of separating the hub into different sections with loading zones between them, all of the features you need are accessed from the same central spot in Elgado. Completing all your pre-battle chores, like turning in quests, crafting new weapons, checking on your pets and eating a meal, has never been easier. You need only walk a few steps to get from any key destination to the next.

Ultimately, you don’t spend a ton of time there, especially now that the hub is more streamlined. Which I’d say is a good thing. If you’re playing Monster Hunter, you probably want to hunt monsters. Luckily, Sunbreak has a decent chunk of new foes. Sunbreak brings with it some monsters new to Monster Hunter, some monsters returning from past entries, some subspecies of monsters already present, and a higher-difficulty version of every fight from Rise. And they’re all a blast. 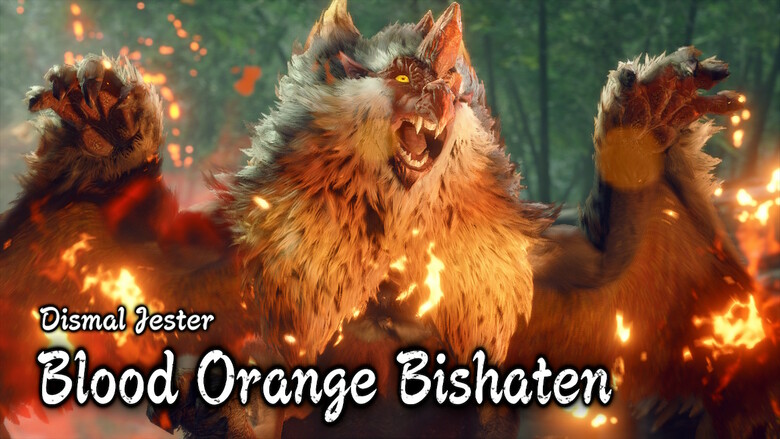 Fighting old monsters in Sunbreak’s new Master Rank can often feel like a totally new experience. They’re significantly more aggressive than before, giving you next to no downtime to heal or think. You’ve pretty much always got to be on your A-game. Even if you’re an experienced hunter who’s well-versed in each creature’s moveset, you can’t get too comfortable, as old monsters will occasionally throw out entirely new moves. These new fights are intense, they’re challenging, and they feel pretty different from their base-game counterparts.

The subspecies can feel even more different, but there aren’t too many added and I struggled to tell some of them apart from the originals in any way outside of aesthetics. That said, if you’re fighting an Almudron fueled by magma or a Bishaten equipped with flaming pinecones, you have to approach them very differently from how you would approach the originals.

The selection of old monsters brought back here is fantastic. No fight in the base-game feels like Shogun Ceanataur, a crab wielding blade-like arms. Fan-favorites like the flagship of Monster Hunter 4, Gore Magala, make their triumphant return. This expansion even adds Espinas, a giant, dangerous dragon that can paralyze, poison and burn you all at once that originates from Monster Hunter Frontier, an old MMO that never saw an English release.

The entirely new monsters are also great. They’re themed around Western mythos to fit the vibe of Elgado, with Sunbreak introducing monsters based on the likes of werewolves and vampires. They look very unique and very cool, and they’ve got some of the best-looking moves this series has ever seen. The only problem is how few of them there are. I can count the all-new creatures on one hand, which is a theme seen throughout Sunbreak, sadly.

Sunbreak only introduces 2 new areas to explore and hunt in. There’s The Jungle, an old area that’s been revitalized for Rise. And there’s The Citadel, an all-new area that may be my favorite area in Monster Hunter history. It’s got cool ruins to explore, a super unique atmosphere and diverse biomes. But it’s a little sad that it’s the only all-new area here. 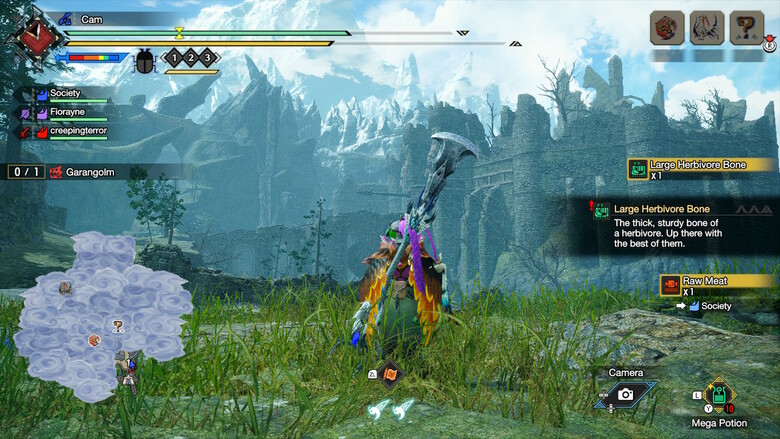 The Citadel is gorgeous and super varied, but I do wish there were more new locales to hunt in

By comparison, Monster Hunter: World’s Iceborne expansion was priced the same and structured very similarly, but it brought with it substantially more monsters than Sunbreak. Iceborne’s new roster of creatures was almost double that of what Sunbreak brings to Rise. The fights in Sunbreak are great, some of the best in the game, but, going off of prior Monster Hunter experience, I was expecting some more new foes.

The lack of new creatures is especially felt in the early stages of the Sunbreak campaign. After playing for 10 hours, I could count the number of new monsters I’d fought on one hand. Most of my time had been spent hunting stuff already found in Rise. It was fun, and the fights were notably different, but it dragged on just a bit – especially knowing that so many cool monsters were waiting for me in the latter half of the game. However, it would’ve felt like it dragged on even more were it not for the new switch skills introduced.

In Monster Hunter Rise, switch skills are different moves that you can equip to certain button inputs. Each weapon was given plenty of new ones to choose from in Sunbreak, and Sunbreak also introduces a mechanic that allows you to switch between 2 sets of equipped switch skills at the press of a button. This addition is great, but the impact it’ll have on your experience may vary.

I primarily use 2 weapon types in Monster Hunter games: the insect glaive and the dual blades. With the insect glaive, I didn’t find any of the new switch skills particularly useful, nor did I find myself switching between sets of switch skills often. The set of skills I like to use consists of moves that rely on one another in some way, moves that flow together well. Changing skills with the insect glaive only broke that flow. But with the dual blades, I found the new switch skills a ton of fun. Being able to swap between sets of switch skills was super useful, and I even had sets optimized for different situations that I found myself switching between regularly. Though, sadly, some of the most fun switch skills aren’t introduced until well into Sunbreak’s campaign. So, if you don’t like the few they give you at the start, you’ll spend quite a while stuck with old skills and fighting old monsters.

The pacing really does pick up in the latter half of the game, though. There’s a much better ratio of old to new creatures. And I feel like the new monsters are introduced in the perfect order – they just get crazier and crazier. The first time I fought Malzeno, the monster right on this expansion’s cover, I was super intimidated. Going back to fight it again in the post-game, after having fought some of the stuff that comes after it, it didn’t feel nearly as impressive. I was constantly left wondering how Sunbreak could top the new fight I just did, and yet, it almost always managed to do just that.

Speaking of the post-game, there is a pretty substantial one here, but it was a little too grindy for me. The post-game monsters, with movesets that are extremely similar to their campaign equivalents, have way too much HP. And the amount that you need to grind to see every new fight in Sunbreak is a little ridiculous. By the time you beat Sunbreak, you’ll be at Master Rank 6. To see the last new fight, you need to reach Master Rank 100. The new content isn’t hugely important, but locking any new fights behind hours upon hours of grinding isn’t cool in my book.

There are some other small additions in Sunbreak. Your palamute is better at responding to your calls to ride them, which was definitely noticeable. And the new follower quests, which let you hunt with an AI companion, are a nice addition. I liked having something to do when my hunting buddies were offline that wouldn’t leave them behind. But, mostly, Sunbreak is structured like Rise, and it plays like Rise. You traverse through ranks, hunting new monsters and solving a mystery that, in the grand scheme of things, doesn’t really matter. The story isn’t the focus here, the appeal is the monster hunting. And, as always, it’s a ton of fun.

Ultimately, I really enjoyed Sunbreak. Sure, it has its pacing problems, and it doesn’t offer as much new content as I expected. But what’s there is the absolute cream of the crop. The all-new area is amazing and a ton of the new fights are some of my favorites in the series. If you enjoyed Rise, you’ll enjoy Sunbreak, and you should absolutely bring your band of hunters back together to take on some crazy new foes. There are already post-launch update plans announced, promising new monsters to fight and even a new locale. If those updates bolster Sunbreak’s monster roster by a decent amount and keep the level of quality we’ve seen thus far, Sunbreak has the potential to be the greatest Monster Hunter experience yet. As it is now, I’d still recommend it to every Monster Hunter fan.