No smoke and mirrors! What you see is what you get. 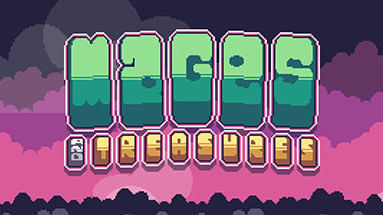 Often, a game will build on its ideas and mechanics as players make progress. The tutorial may start out with a single idea, then add onto it until the full potential is reached. On the other hand, some games will start out simple and stay that way throughout. An idea is introduced, and its potential isn’t explored or built upon. Mages and Treasures, a game from the small team at lightUP, feels this way in many aspects. Whether it be its gameplay, graphics, or puzzles, the simplicity remains constant, and leaves something to be desired. 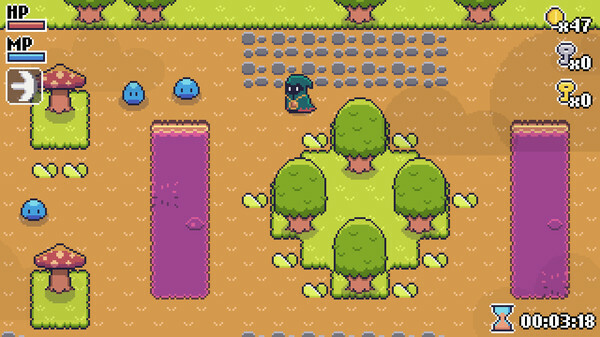 The gameplay of Mages and Treasures isn’t hard to grasp: you see an enemy, you press the B button to fire off a magical spell, and you continue to mash away until the enemy is dead. It’s not hard to understand, and it doesn’t get any more complicated than that.

Similarly, Mages and Treasures may seem like it has a variety of enemies, but they really break down into two types: ranged and close-contact. For example, the spiders from one area work nearly the same as bats in another. This approach is applied to nearly all of the monsters in the game.

As you make your way through the game, you’ll unlock new spells. Unfortunately, instead of adding depth to the combat, each spell functions as a slight upgrade for the previous one. This further pushes combat into nothing more than button-mashing. While you have the option to switch between spells, you’ll never feel a need to, as every other spell in your collection is nothing more than a lesser version of what you just unlocked. Making matters worse, your fire spell doesn’t set things on fire, your ice spell doesn’t freeze things, and so on. There’s a lot of potential for dynamic gameplay here, but that element is never explored. 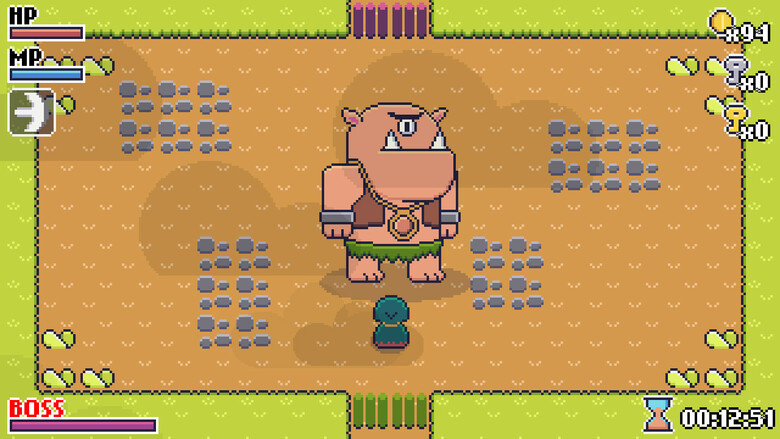 The first area boss: avoid the bullets and shoot it until it's dead.

As far as graphics go, while things lack complexity, there are some nice designs on display. In particular, I really enjoy the cute snowmen you find dotted around the second area. A modest pixel art approach is used throughout, but each area manages to feel distinct via unique set pieces. The first area has purple water and mushrooms, the second area is a snowy landscape, the third is littered with lava and skulls, and so on.

The biggest drawback with the visuals in Mages and Treasures is a lack of commitment to the art style. For every cute character or appealing landscape, there are repetitive, generic pixel tiles that result in a somewhat plain aesthetic. Again, this feeling of simplicity is a theme found throughout Mages and Treasures. You’ll constantly feel a desire to see aspects of the game expanded upon, but it never happens. 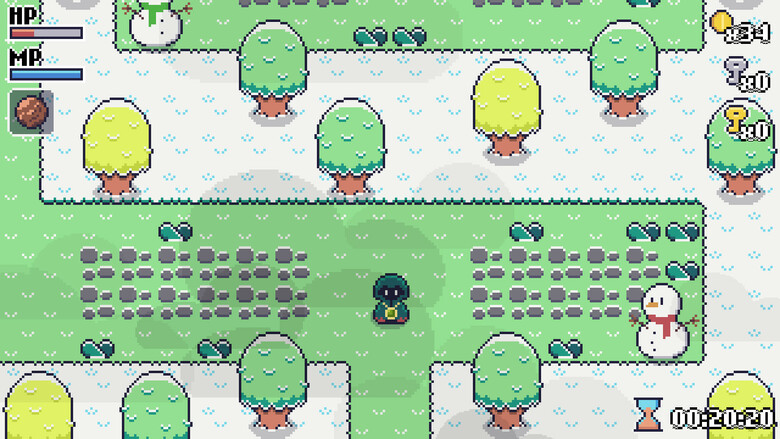 Lastly, and perhaps most noticeably, are the puzzles. There are 30 puzzles in the game, and they once again can be broken down into two categories: flip a set of switches, or push barrels onto a set of buttons. It’s as simple as that, and while the puzzles do ramp up in difficulty as the game goes on, the premise itself never changes.

Puzzle difficulty is increased in a few different ways. Some puzzles will place a bunch of monsters in your way, which need to be dealt with in order to finish the puzzle. Other puzzles will be spaced out along large distances, meaning you’ll have to move barrels further to solve them. Finally, a handful of puzzles do nothing more than increase the number of barrels and switches. The end result is puzzles that take longer to complete, rather than provide a deeper experience. Any potential for more complex, interesting puzzles goes wholly unrealized. 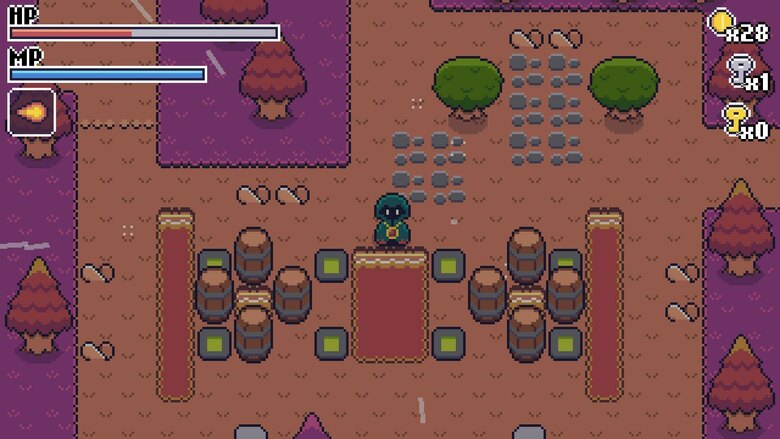 An example of a later-game puzzle. Push the barrels on to the buttons.

All in all, Mages and Treasures isn’t a bad game. It has charm, offers promise, and provides a modicum of challenge. Sadly, there are numerous occasions where the game never builds upon its ideas, no matter how much you expect it to. This leads to an experience that’s pretty homogeneous throughout. What you get at the beginning is exactly what you’ll get at the end, and that’s a little bit disappointing, especially when looking at the many elements that could have been deeper explored.