Trove’s Boomeranger class is getting a major revamp

A trove of tweaks 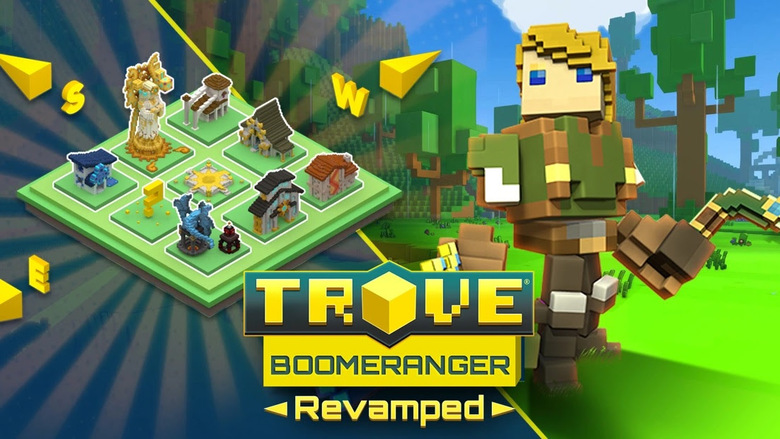 Trove’s Boomeranger class is receiving a major revamp that includes a new passive ability, changes to its attacks, and new effects to the class’s Mysterious Urn ultimate ability. Additionally, players taking their first steps into Trove will enjoy a more streamlined user experience that will help ease them into the game. This update is not yet live on Switch, but will be coming soon.

The revamp should make the players’ weapon choice matter more now that the Boomeranger’s melee weapon and bow feature slightly different playstyles. When wielding a melee weapon, this class deals physical damage with each swing allowing its third attack to summon a cyclone that deals even more physical damage every 0.5 seconds for 1.5 seconds. When wielding a bow, physical damage will be dealt as the Boomeranger lets loose a flurry of Fire, Ice, and Bomb Arrows with each draw. Fire Arrows apply damage over time, Ice Arrows slow enemies down, and Bomb Arrows are fired 3 at a time to deal damage to an area.

Regardless of what a player’s Boomeranger wields, the new Final Fairy passive ability is here to lend a helping hand. When players are at low health, a fairy companion will heal and grant damage reduction for a short time. Hopefully, this will allow the Boomeranger to get themselves out of trouble – or further jump into the fray to make a final push towards victory!

Finally, the Boomeranger’s Ultimate Ability – Mysterious Urn – has received new effects that will not only cause an area of damage where thrown, but a random bonus will also be awarded to the player.

A new user experience has also been implemented aimed at improving flow and reducing points of confusion. For example, the size of NPCs has increased in size to be more noticeable for new players and it’s now easier to follow earlier quests by including markers on the compass, map, and a new VFX in game.