What year is it?!

The Garbage Pail Kids are ready to party like it’s 1985 again. The gross-out icons are hopping off the trading cards and into your TV thanks to an all-new NES game – yes, you read that correctly – from iam8bit Presents and Retrotainment, in collaboration with and under license from Topps, the brand creator. Garbage Pail Kids: Mad Mike and the Quest for Stale Gum cartridges are now available for pre-order on iam8bit.com.

The 8-bit platformer will also be available digitally on Switch October 25th, 2022, supported by a suite of quality-of-life features and bonus content developed and curated in partnership with the team at Digital Eclipse. This version is priced at $10 and the extras include the following:

Archival Card Scans - Did your parents toss out your trading-card collection? Want a quick refresher? Take a look at some of the most memorable Garbage Pail Kids in their original form through high-res scans

Music Player - Love a particular track? Play it ‘til your speakers melt!

Gameplay Extras - Save states and rewinds help players who may be a little rusty; visual filters simulate a variety of old-school displays; and all-new screen borders fill the edges for those who aren’t playing on a 4:3 CRT.

Players can instantly swap between each kid depending on which challenges they’re facing at any given moment. Tricky side-scrolling levels including Egypt, Transylvania, and Hell will test the mettle of even the most hardcore old-school gamer. Players can collect and trade 8-bit versions of the official Garbage Pail Kids cards, including some that can be used in battle (Adam Bomb, anyone?). Minigames, including porta-potty fishing, round out Retrotainment’s loving tribute to Garbage Pail Kids and classic retro games. 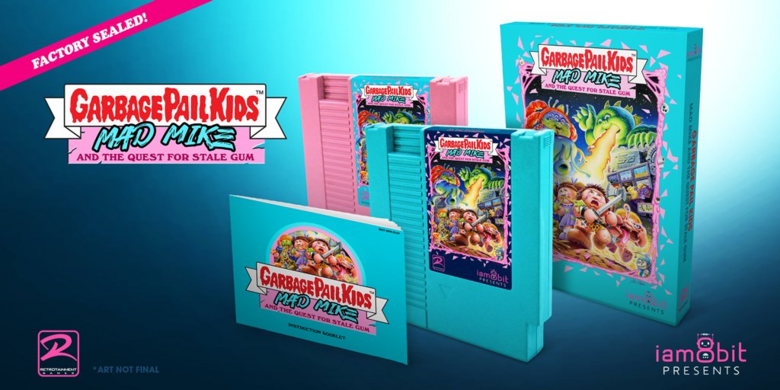 The Garbage Pail Kids: Mad Mike and the Quest for Stale Gum NES cartridge ($79.99) comes in two randomly distributed color variants: Mad Mike Blue and the ultra-rare Stale Gum Pink. Both are packaged in a high-quality retro box and sleeve (complete with that new NES game smell!), with a premium full-color instruction booklet and four jumbo 5”x7” trading cards featuring the cast of playable kids. Pre-orders also come with a download code for the digital edition at no additional cost. Cartridges are expected to ship Q1 2023.