Disney Illusion Island dev explains how he landed the deal

Massaging the house of mouse 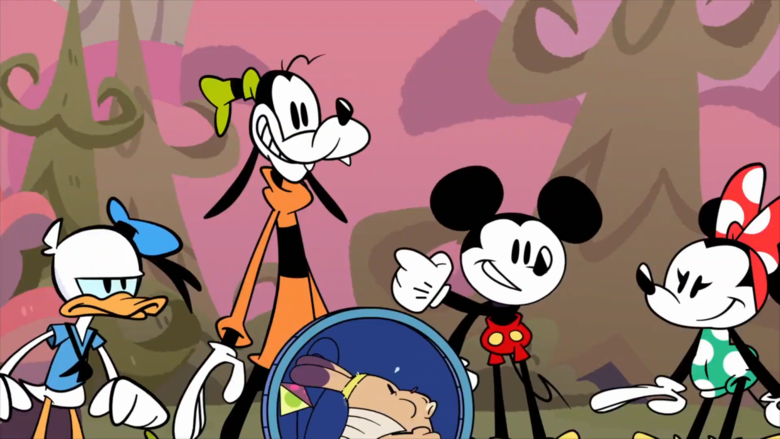 Disney recently held an event that showcased some of the games they have in the works, and one of the big surprises was Disney Illusion Island, a brand-new co-op platformer featuring Mickey, Minnie and the gang. It’s not every day that you see a brand-new Mickey Mouse game, so how in the world did this come to be? One of the devs on the project has revealed the steps taken to land the deal.

Dlala Studios is working with Disney to create Disney Illusion Island, and CEO Aj Grand-Scrutton spoke to Games Industry about the behind-the-scenes process of getting the game greenlit. Turns out you need a ton of passion for your game idea, but more importantly, the intellectual property you’re working with as well.

“You need to be at least temporarily the Wikipedia for that IP. That doesn’t mean you have to know everything, but it has to mean you’ve done your best to absorb all you can.

Before pitching this to Disney, I went and I watched all the cartoons on Disney+, I read the comics, I’ve read the Bible-length ‘90-year History of Mickey Mouse.’ I went back and played the old games, I went into the Disney fandom Wiki. I made sure that my passion for Mickey was supported by my knowledge of Mickey.

…when I pitched to Disney, I didn’t claim for a second that I can tell stories better than Disney, because no one can. Instead, I said ‘Here’s a story in a concept but we want to work with you to really develop this.’ If you’re pitching for something that isn’t necessarily a story-driven IP, then sure, you can show off your storytelling skills, but this [story slide] isn’t about showing off, it’s about the conceit for which the game sits in.

…I said to the Walt Disney Company, ‘Hey, I want to take your 96-year-old IP and do some stuff with it’ – I had to show them I was going to respect Mickey & Friends. I always was, but they don’t know that, so just make sure you demonstrate that.

Make sure you are very sincere that you’re not here to make a quick buck off the IP. You are here to give it love and care, treat it as if it’s your own, and do something really awesome with it that maybe they can’t do internally, and that’s why you provide value.

When I pitched for Illusion Island, there was no one that left that room – no one that left any room ever with me – that doesn’t know how much I love Mickey. I mean, I’m a grown man so maybe I shouldn’t love Mickey quite as much, but this is important.

You’re pitching for IP, show them how much you love it. And like I said at the start, only pitch for the IP you love. Only pitch for the stuff you’re willing to absorb, that you’re willing to live in, because especially as leaders, not everyone on your team is going to be that into the IP. Those people will be influenced and feel inspired if they see how much you love it. They’ll feel like they’re doing something special.”