This is a long one, folks, grab a snack and read ahead. 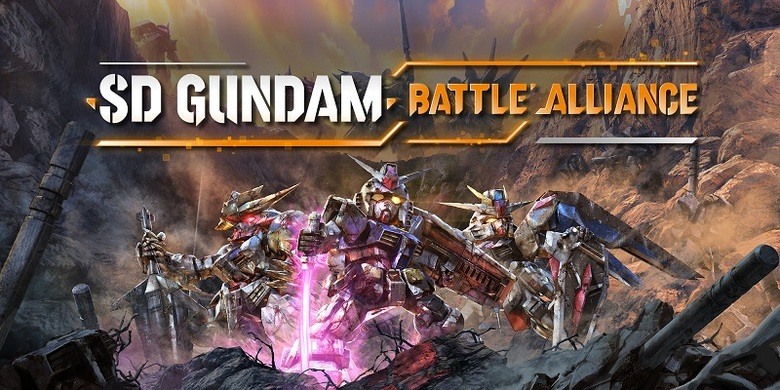 Bandai Namco has just released the latest update for SD Gundam Battle Alliance now bringing it up to version 1.30. If you thought the last one was hefty, you’ll be surprised with this one! You can check the full list of patch notes below.

┗EX Mission07 will be unlocked after clearing all Hard Mode missions except for “Chaos Missions”.

The following missions will be playable if you have purchased the DLC3.

“Rebirth by Destruction”, “Flash of Fate”, and EX Mission Extreme５

※Please note that in order to play “EX Mission Extreme5”, you will need to complete the “Rebirth by Destruction” and “Flash of Fate” missions in addition to free mission “EX Mission10”.

・Adjustments have been made to the ease of hitting SPA (Special Attack).

┗Adjusted the SPA to turn toward the direction of the enemy unit at any time during the SPA cut scene.

In addition, the stepping distance and guidance performance after SPA activation for some units have been adjusted.

※Excluding some units that perform dancing SPA attacks on the spot.

・The effect of some parts, ” Increase the weapon use limit “, which also increased reload time when equipped, has been changed to an effect that does not increase reload time.

●Adjustment of the role “All-Rounder”

・Added “Double SPA recast gauge recovery speed” effect to the effect during Role Actions of All-Rounder in addition to the existing effect.

┗With the adjustment of the SPA’s ease of hitting, it will make it easier to use the All-Rounder’s characteristic, “SPA with higher power than other rolls”.

・The “Stagger effect” of All-Rounder was increased.

┗The “Stagger effect” of each action has been significantly increased, making it easier to take down MAs by continuously targeting the same part of the body.

┗This allows the use of skills generated by Role Actions at any time, as long as the skill gauge has been accumulated.

・The number of repair kits All-Rounder can have has been changed to “5”.

●Adjustment of the role “Infighter”

・In addition to the existing effect, Added “Boost consumption by 0.7x and final damage suffered by 0.8x” to the effect during Role Actions of Infighter.

┗It is now easier to take advantage of the Infighter’s feature of sticking to the enemy and inflicting damage continuously.

※For the types of SPAs like Full Armor Unicorn Gundam, where the roll can be changed from Sharpshooter to Infighter, tt is possible to receive the above effects by using Role Actions during SPA effects.

However, the effect is lost when the effect time of the SPA expires and the roll is returned to its original roll.

┗This allows the use of skills generated by Role Actions at any time, as long as the skill gauge has been accumulated.

・The number of Infighter repair kits possessed was changed to “4”. ・Adjusted basic hate multiplier for Infighter

※This adjustment has eliminated the extreme increase in damage exposure even at some level of separation.

・The HP of Mobile Armors (MA) appearing in the following missions have been adjusted down.

┗Apsaras III from Directory 2B, The Shuddering Mountain, Part II

Plugin P from Directory 2D, Trails to the Land

Hashmal from Directory 3A, Hunter of Angels

Graze Ein from Directory 3B, Say it Ain’t So, Bernie!

Zeong from Directory 4B, Encounters in Space

Plugin H from Directory 4D, Wings to the Heavens

※All of the above missions (EASY, NORMAL and HARD) are subject to this adjustment.

※MAs that appear in missions other than the above are not subject to adjustment.

┗MAs have ” parts” around each point that can be locked on, and each part has its own value related to down.

When an MA is attacked, the value set individually for each attack accumulates for each part of the body.

When the accumulated value exceeds the value set for the MA, the MA goes into a down state for a certain period, creating a chance to attack.

The down time varies depending on which part of the body is affected.

With this adjustment, the values set for each part of the MA have been adjusted to make it easier to take down overall.

In addition to this adjustment, the All-Rounder has an upwardly modified “Stagger effect,” making it easier to work with a team that includes the All-Rounder to fight MA.

※Some MAs are not subject to adjustment.

・The durability value of the barrier was gradually recovered after a certain period of time after damage was inflicted on the MA’s Beam Barrier, but it is no longer recovered.

・The attack effects that occurred in the behavior of hands on the ground after a drop kick attacked by “Psycho Gundam” has been eliminated.

・The duration of the attack effects on both legs after a “Hashmal” pounce attack has been reduced.

・The “Psycho-Shard attack that develops on the spot” by “Neo Zeong” has been adjusted to make it easier to avoid by stepping/boosting to the left or right, by adjusting the accuracy of turning around.

・The “grabbing skills” used by the following enemy ace units have been adjusted so that they are easier to avoid by jumping or stepping to the left or right, etc., by reducing their inducement performance.

●Adjustment of HP of Enemy Battleships

・The HP values of the following enemy battleships have been reduced.

※Battleships appearing as allies are not subject to adjustment.

・The amount of capital dropped from enemy units has been adjusted upward to make it easier to strengthen the units.

・The amount of capitals appearing from containers has been adjusted upward for all difficulty levels.

・The amount of blueprints sold has been adjusted upward to a flat 5 times increase.

・The sale value of expansion parts has been adjusted upward for each rarity level. ┗Rarity 1～4  → Flat 5 times increase

・The sale amount of Uncapping materials has been adjusted upward to the following sale amount:

┗Players can turn this function on and off in the options screen so that they can continue to attack and earn combos while locked on to an opponent who is defenseless with zero HP.

This function is turned off by default, so if you wish to use this function, please switch the option setting to on by yourself.

・Adjustments have been made so that items will drop without explosions or Breakout effects again when an enemy is destroyed.

●Improvements around the system

・Extension parts can now be sold on the Results screen.

┗When checking the acquired items on the result screen, you can select and sell the expansion parts by pressing the “Go to Expansion Parts Sale” button.

※Uncapping materials and other items, except for expansion parts, cannot be sold on the results screen.

・It is now possible to “lock” (favorite on/off) expansion parts so that they are not eligible for sale on the “Expansion Parts Equipment Screen”.   ・When searching for multiplayer rooms, rooms that have players available and can be entered are now displayed at the top of the list with priority given to those rooms

・New callout messages have been added to the “Greetings/Reply”, “Praise/Thank”, and “Order” chat messages during multiplayer.。

・Fixed a problem in certain missions where enemy aircraft would get caught in terrain, etc., or fall out of combat range.

・The special melee attack of “Arios Gundam” has been adjusted so that it is now properly beam.

・The counter attack of “GM (Gatheroad)” has been adjusted so that it is now properly beam.。

・The SPA of “Gundam Astray Gold Frame Amatsu Mina” has been adjusted so that it is now melle damage.

・SPA of “Gundam Barbatos (6th Form)” has been adjusted so that it becomes a physical damage correctly.

・The Launching Attack of “Nu Gundam Gundam” has been adjusted so that it is now melee damage.

・Subweapon1 in “Moon Gundam” was described with a Beam icon, but the correct icon is Physical, so the icon description has been corrected.

・The main melee of “Cao Cao Wing Gundam” was indicated with a ranged damage icon, and the icon has been corrected to indicate the correct melee damage.

・Corrections have been made to some playable units. ┗Fixed a problem that prevented the combo of special melee attack in the air to strike down attack for “00 QAN[T]” and “Freedom Gundam” from making combos.

・Fixed to actively guard against MA shooting attacks when your partners are targeted by MA.

・Fixed an issue in which the pilot skill “Ascetic” in combination with “Making Money” did not increase the capital earned.

・Allows players to set any action to the side button of the mouse. *Up to two actions can be assigned.

┗Turning the mouse wheel up changes the lock target to the right, and turning it down changes it to the left.

*The default key assignments have been changed since the operation method has been drastically changed from Ver. 1.20 and before.

However, we understand that it would be confusing for players who are already playing the game to change to the default key assignments provided by the game. For this reason, the game does not override these settings.

We apologize for the inconvenience, but we kindly ask you to change the settings of the side buttons of the mouse and the multi-Button actions to single presses by yourself.

・Other graphic and text modifications are made.