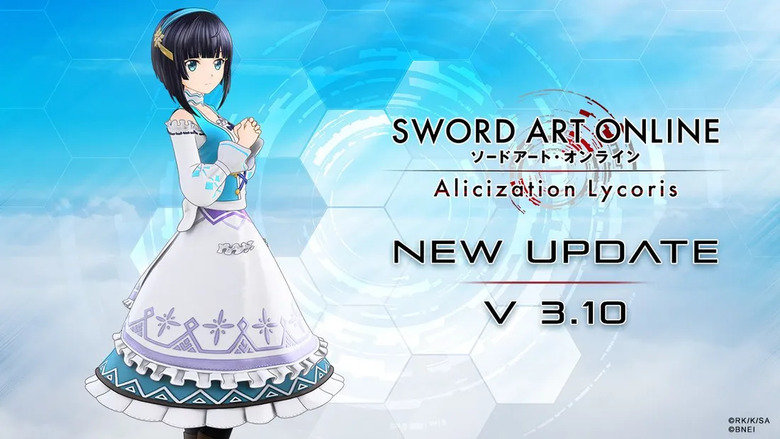 Completing all four quests will unlock the final quest “The Ties That Bind”.

You can exchange it for an eligible weapon of the same name, enhanced to +99.

SP Weapons that has been added to the Memory Exchange cannot be strengthened.

Exchangeable weapons will be unique weapons whereenhancement values cannot be transferred to other weapons.

-“Exchange Tickets” in the SAO SHOP can be exchanged for “CUBE Tickets” or “Incarnation Shard Tickets”.

-CUBE Tickets can be exchanged in the SAO Shop.

The number of Shards required to reach the “+50” enhancement has been reduced.

-To make it easier for beginnerandintermediate players to play, the EnemyLv. for the first time playing Blooming of Matricaria has been reduced from 100 to 95.

-When usingother the other squads led by characters such as Asuna or Bercouli,buff effects such as increased EXP have been added.

-In order to eliminate the repetitive feel of the dungeon and expand the scope of gameplay, the dungeon has been modified so that bosses appear in the 10th, 30th, 50th,70th, and 90th layers of the dungeon.

-In addition, save points have been installedas fast travel points to enhance usability.

-In conjunction with this change, the starting pointsfor events that used to occur in the certainlayers have been changed.

In the lower layers, the entrances and exits of the dungeon map, where it is easy to get lost in some areas, have been changed so that the distances are closer together. In addition, some walls have been removed.

Enemies in the dungeon will now drop multiple Incarnation Shards.

-Prologue skip: In Blooming of Matricaria+ (from the second run), a part of the prologue can now be skipped at once. In addition, a dialog box is displayed at the beginning of the prologue to prompt the user to confirm whether to skip the prologue.

-Modification of the event flow in the chapter “Pruning”: In order to improveusability, a part of the dungeon explorationin “Central Nimarivera” has been deleted. Scene flow has been adjusted due to this deletion.In addition, the dungeon exploration part with Asuna’s party has been modified so that players have a choice on whether they want to explore or notin and after the second runand on.

-Modification of the event flow in the chapter “Axillary Bud”: Some playable parts have been removed to improve usability.

-Added an option to skip a part of the Round Robin battle in the normal route of Blooming of Matricaria.