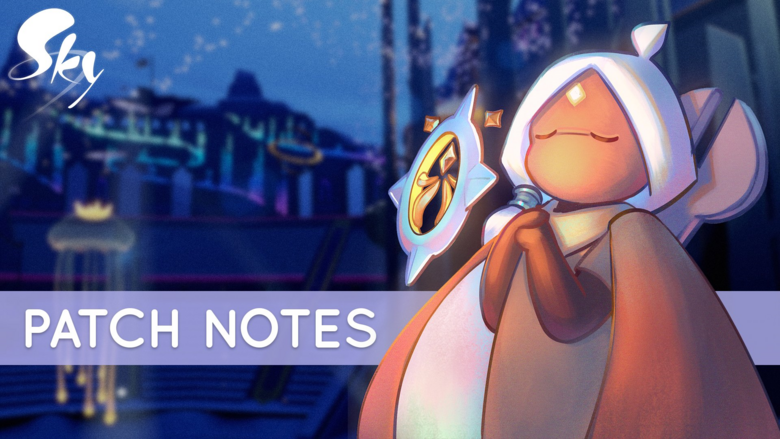 Sky: Children of the Light has been updated to Ver. 0.19.0 on Switch. You can see the full patch notes for this update below.

A Familiar Voice Returns with Season of AURORA

Season of AURORA begins on October 17th! This collaboration features the acclaimed Norwegian singer known around the world for her hits such as “Runaway” and “Cure For Me,” and the ethereal vocals she lent to Frozen II’s “Into the Unknown.” Since Sky’s launch her songs have already greeted players in Isle of Dawn and Eye of Eden, and now she returns to sing life into stories of struggle and hope.

Seek four Seasonal Spirits who have gathered around the AURORA Season Guide in the Valley of Triumph’s Coliseum. Each brings a story written by AURORA and told through her voice in Seasonal Quests, weaving song and memory to gradually reveal a light from the world’s distant past.

These Spirits also offer a variety of items as mementos of their stories. Within the AURORA Guide Spirit’s tree, too, are other items especially designed for this Season, including music sheets, an outfit, and three extra emote expressions which can gradually be unlocked throughout the Season with Candles or Hearts. Her Friendship Tree also includes a specially themed mask and outfit from the song “Cure For Me.” These will be available after completing all Seasonal Quests until the end of the Season, and can be unlocked with regular Candles.

Separately from those seasonal items, specially themed items created for this collaboration will also be offered as in-app purchases:

These will be available throughout the Season. We’re also working on a few more of these items for the second half of the Season coming in 0.19.5, which we’ll announce for the next update! (Please note that since these are part of a limited collaboration, they are not scheduled to return in future years.)

Season of AURORA begins at 00:00 Monday October 17th (Pacific Daylight Time, UTC-7) and continues until 23:59 Monday January 2, 2023 (Pacific Standard Time, UTC-8). Content can be enjoyed by all players who have progressed through at least Valley of Triumph.

As always, the full Season can be enjoyed by all players for free. Season Pass holders will also have the opportunity to unlock additional seasonal cosmetics, including the Ultimate Gifts.

The Cackling Crab is back! From 00:00 Monday October 24th (PDT) until 23:59 Sunday November 13 (PST), celebrate the time for shenanigans during this year’s Days of Mischief. A cranky cat has taken up residence around the cauldron, which will be overflowing with spells for passing Sky children to try out.

Meanwhile, there are new ways to explore the area, from the tiniest crannies to the skies above… Once the event begins, talk to the event Spirit who will arrive in Home to get started!

To mark this year’s festivities, players can choose from these spells and trinkets:

Spells and items from each previous Days of Mischief since 2019 will also be available to choose from. For those who prefer something from among these items instead, seek out the staff NPCs in different areas of the event area who offer them in their trees once you talk to them.

From the Mischief Guide in the event area:

From various NPCs lurking off the beaten path:

Note that this item is categorized as a hairstyle, so it cannot be combined with other hairstyles, unlike the Witch Hat Accessory Spell

(Please note that in some countries outside the U.S., prices of these items may be different from previous years due to the recent price change.)

Days of Mischief is available to all players who have progressed to at least Vault of Knowledge. Spells for players to try all IAP items for free can be found by speaking to Mischief Spirits, or at the Sleepy Traveling Merchant’s boat. The boat will have additional Crab Rock Trick, Candle Trick, Dark Dragon Repellent, and Witch Hat Accessory spells as well.

We’ve added a new map feature to the game! We hope these will be helpful as you explore and seek your way through the realms.

Now that Season of Shattering has ended, the Shard Eruptions are no longer falling as they did during the Season. There will be a wide variety of which eruption strength falls on a particular day of the week, and there may be days where no eruptions fall at all. Pieces of shards will continue to appear atop gates in Home to indicate the level where there is an active, fallen Shard Eruption.

Shattering memories and Ascended Candles will continue to be available from eruptions with red shards. The specific memory that can be viewed will be randomized. If a player has completed all Shattering memory quests, they will be able to see whichever memory arrives on that day.

If a player has not completed all the memory quests, they will be able to progress through the quests in order each day there is a stronger eruption. A new quest can be completed with each eruption that a player clears.

It’s that time again: Daylight Saving Time will end at 2:00 am Pacific Time on Sunday November 6, moving clocks back an hour and changing the time zone for Sky events from UTC -7 to UTC-8. If your area does not observe Daylight Saving Time then, after November 6 the daily reset will occur an hour later for you. Event notation will be marked in PST instead of PDT.