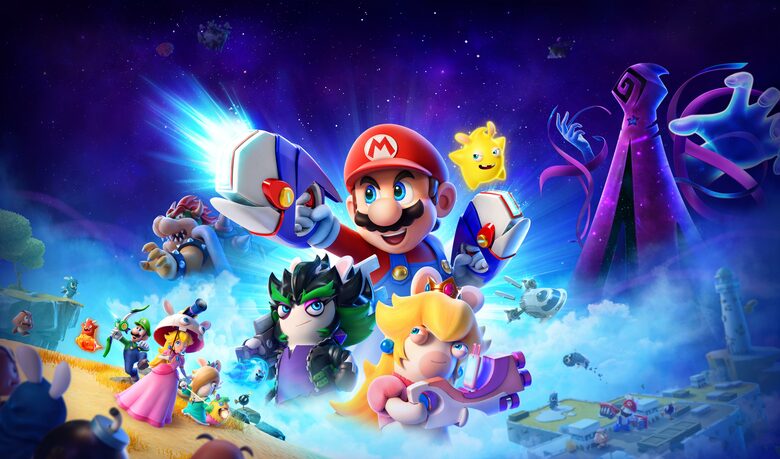 PLEASE NOTE THAT THIS IS A REVIEW-IN-PROGRESS. THIS REVIEW WILL BE UPDATED WITH FINAL THOUGHTS IN THE NEAR FUTURE.

I’m sure many of you remember the lead-up to Mario + Rabbids: Kingdom Battle. Unfortunately for Ubisoft, first news of the collaboration hit the internet through a leak, and it of course sent the internet into a tizzy. Many questioned the how and why of such a team-up, and couldn’t fathom how the two franchises would merge into anything entertaining. When we eventually got to the official reveal of Mario + Rabbids: Sparks of Hope, those worries started to fade and fears were assuaged. Further still, once Mario + Rabbids: Kingdom Battle released, Switch owners around the world found out that the pairing not only worked, but it was an absolute blast.

At its very core, Mario + Rabbids: Sparks of Hope is aligned with Kingdom Battle before it. You work your way through an adventure that mixes Rabbids and Mario characters who fight in turn-based battles. Much of the strategy and mechanics found in the franchise’s debut return here, and as they should. You don’t want a sequel that completely throws away everything that people loved about the original. Instead, the goal should be to expand what worked, do away with what didn’t, and throw in some fresh ideas along the way. That is exactly what Mario + Rabbids: Sparks of Hope does, and then some. 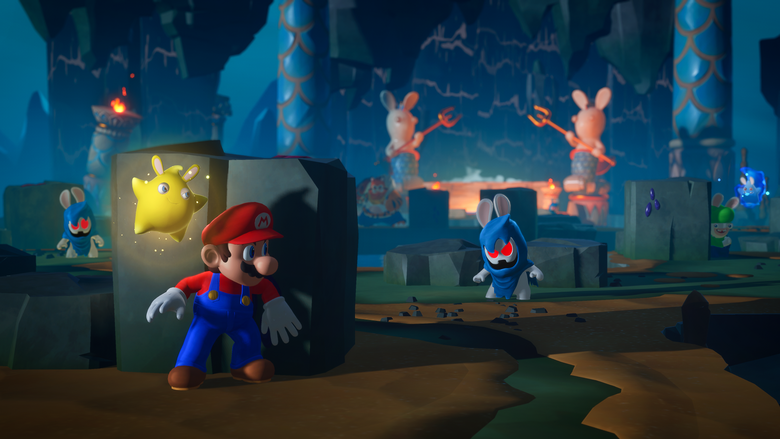 Danger around every corner

Here’s the really exciting thing about Mario + Rabbids: Sparks of Hope, in my opinion. While it still very much feels like a Mario + Rabbids game, the fresh gameplay approach absolutely works wonders for the experience as a whole. There are a handful of adjustments and new ideas that may seem small on the surface level, but they really make for something that feels wildly different. Truth be told, some of the changes Mario + Rabbids: Sparks of Hope employs makes you wonder why they weren’t part of the original game!

Without a doubt, the biggest change Mario + Rabbids: Sparks of Hope implements is the aspect of exploration. While the original game certainly had some explorative elements here and there, it was a largely linear game. Mario + Rabbids: Sparks of Hope opens things up in grand fashion, and it’s absolutely jam-packed with stuff to do. You see this right off the bat with the game’s first level, which looks a bit tiny at first, but you quickly discover there’s a lot to unpack.

While you have a main mission to follow that pushes forward the storyline and overall adventure, each area also has plenty of side-quests for you to tackle. Obviously, doing at least some of these side-quests is going to be worth your time, as you’ll level up your team, gain helpful items, collect more coins, and even add side-quest exclusive Sparks to your team. While most of these side-quests involve battles in some way, that’s not all there is to them. In the first area alone, you’ll take on side-quests that involve destroying roving Bob-ombs, cleaning up batches of ‘Darkmess,’ helping a Rabbid throw a beach party, and a lot more. Again, first glimpse at the initial level makes the area look modest, but the more you wander into it, the more you realize there’s secrets hiding around every corner.

Best of all, what you see on the level map isn’t everything that’s waiting for you to discover. You might happen upon a gated dungeon or locked door that’ll bring you to a completely different area, and that’s a whole new location to dig into. Points of interest marked on the map can hide massive zones that need to be cleared, sometimes just for side-quests and others for the main mission. Not knowing what you’ll unearth next, along with just how much content it hides, makes the adventure that much more exciting. 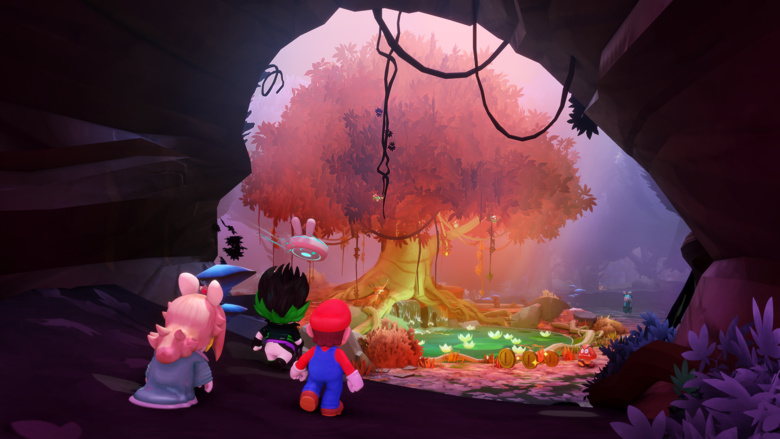 Is that you, Deku?

I really hate talking about games in terms of length, but I think doing so with a portion of Mario + Rabbids: Sparks of Hope will really put things into perspective. I set out to clear the main mission and all side missions in the first stage, and I had no idea how long it would take me. As I went along, more things unlocked that I didn’t even know were there, and other areas I thought to be quick side-missions ended up being multi-layered tasks. By the time all was said and done, I spent over 7 hours alone in the first zone! That’s not even counting the one side-mission that I couldn’t clear due to it being locked until I made it deeper into the main game. That’s a seriously impressive amount of activities packed into one stage!

The next big change in Mario + Rabbids: Sparks of Hope comes from the revamped battle system. For those who played Mario + Rabbids: Kingdom Battle, you’ll no doubt remember movements during battle being locked to an invisible grid. Your grid extended only so far, and you had ‘squares’ to move around in. You also didn’t control your characters directly, and instead pointed them in the way to go by steering around Beep-0, a robot character integral to the game’s story. Mario + Rabbids: Sparks of Hope completely does away with both of these elements.

The battles in Sparks of Hope give you a lot more control of your party of characters, along with movement in general. This time around you’re actually moving Mario and the gang individually, rather than remote-controlling them. The invisible grid for battle has also been nixed, and now you have free reign over where you can post up. Yes, there’s still a barrier that marks how far you can walk during your turn, but as long as your moves are within that barrier, you’re free to hide/attack/stand anywhere you’d like.

Having this level of freedom in battle makes for a much more enjoyable experience overall. I didn’t think the grid-based approach of Kingdom Battle was bad by any means, but if I had to choose between that option or what’s present in Mario + Rabbids: Sparks of Hope, I’m definitely going with the sequel. Having freedom within the move barrier lets you explore the battle map to your benefit, as you can wiggle your way into any spot you want. A few feet to the left or right could end up making for perfect placement in an oncoming onslaught, and better position you for your next moves. Most importantly, this freedom makes battle feel less restrictive overall, and simply more fun. 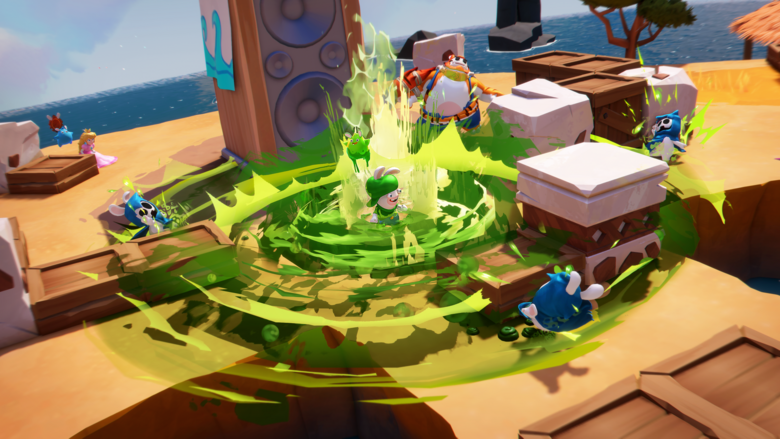 Going hand-in-hand with the new approach to battle movement are the titular Sparks, which shake up combat considerably. Now through storyline missions and side-quests, you’ll have a number of different Sparks to use in battle. These Sparks add yet another layer to combat, which can definitely make for more nuanced tactics. Sparks have a wide range of abilities, and they vary from offensive to defensive options. Some Sparks may outfit your entire team with a shield for a few turns, while others will make your character auto-attack for one turn if any enemy moves close enough. Sparks are passive abilities you apply to your characters at the cost of a movement point, but they can be absolutely crucial in victory.

Even better, much like your regular abilities (weapons, movement, ect.), your Sparks can be leveled up by collecting Star Bits. Just as you’d feed a Luma in Super Mario Galaxy, you can feed Sparks Star Bits in order to enhance their abilities. Select tiers are locked behind overall levels for your characters, but each step along that path will give you a Spark that’s a bit more powerful. For example, one Spark will let you add a ‘burn’ passive attack to your enemies after you hit them. The more you level up your Spark, the badder the burn is. Since the game lets you read up on all enemies to see what they’re strong/weak against, you can use the various attributes of your Sparks to really knock enemies for a loop.

When you marry together the freedom of movement, direct control over your characters, and the Sparks you can utilize, combat in Mario + Rabbids: Sparks of Hope ends up being head-and-shoulders above Kingdom Battle. These new features only enhance what was already an addictive gameplay loop in Kingdom Battle, making the sequel that much better. Having so much control over your moves and a whole new subset to combat creates battles that are unbelievably engaging and rewarding. Taking time to plan out your tactics and seeing decisions pay off feels oh-so good, and all of this is accomplished with an absolutely miniscule barrier to entry. Longtime genre fans will no doubt appreciate the combat in Mario + Rabbids: Sparks of Hope, but newcomers to the turn-based genre will pick things up in no time.

All that good stuff aside, there is one change in Mario + Rabbids: Sparks of Hope that I’m not too keen on. Thankfully, it’s a bit of a superfluous one. There’s been much talk leading up to Sparks of Hope’s release about the Rabbids finally talking. The dev team was quick to point out that they felt the change was necessary for this game, and would also help the Rabbids branch out going forward. For me, having the Rabbids talk has been an underwhelming addition. There’s really nothing I’ve seen so far that explained to me why this decision was made, and that only sticks out more when I see all the other tweaks and changes that greatly benefitted this sequel. Perhaps something awaits ahead that opens my eyes to why the Rabbids have gotten chatty, but so far it’s a change that doesn’t hurt the game, but it also hasn’t proven itself worthwhile. 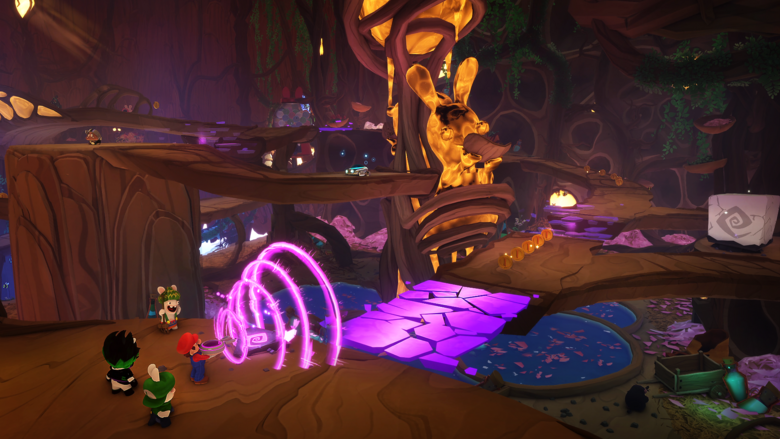 Begging to be explored

Every once in a while, I stumble on a game that I find difficult to put down. For example, there’s something in the DNA of Mega Man mainline games that I find irresistible, and I cannot get enough of the Metroidvania-style Castlevanias. Those games scratch an itch deep inside that I can’t deny, and I’m always ready to come back for more. That is exactly how I feel with Mario + Rabbids: Sparks of Hope at this point. The combination of the area exploration and layered combat is an intoxicating concoction. I have poured multiple hours into this game already, but I can’t get enough. I’m already worrying about moving towards the finale, as I simply don’t want the game to end!

Battling and exploration make up the vast majority of Mario + Rabbids: Sparks of Hope, and so much attention to detail and thought has been put into these components. You can really tell the dev team toiled away to come up with a fresh approach that felt good to play, but also mattered. Without a doubt, Ubisoft could have done a straightforward rehash of Kingdom Battle with some new characters and called it a day. I honestly think that would have been completely fine, especially when it’s only the second time the Rabbids and Mario have teamed. Instead, the team behind Sparks of Hope set out to show they could do a lot more with the idea and make an adventure that’s better for it. So far, I would have to 100% agree with that approach. Unless something goes terribly wrong in the final moments of Mario + Rabbids: Sparks of Hope, I’d say this game tops the original hands-down, and that’s coming from someone who thinks Kingdom Battle was fantastic!