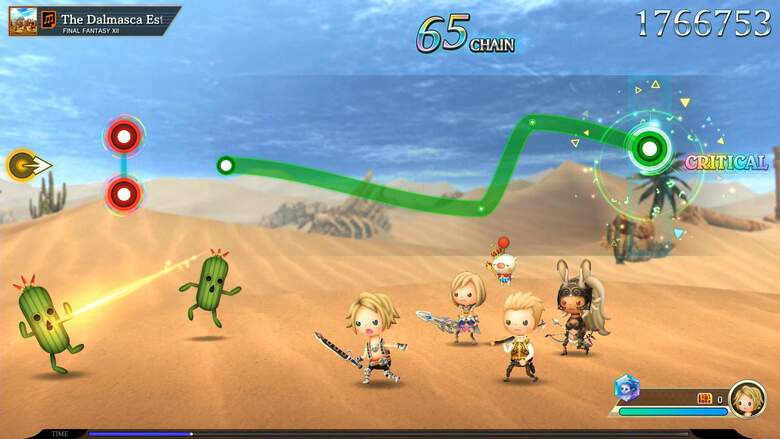 Back in early October, Square Enix shared a wave of new details on Theatrhythm: Final Bar Line. Following that, Square Enix has shared another round of information today. While some of this is a rehash of what we saw earlier this month, we do get some new details on the game’s ‘Series Quests’ mode, characters and party formation. You can read through the full blog below.

With 385 in-game songs, this installment has the highest volume of tracks in the history of the series! The total jumps to 502 when including the DX version and add-ons!

When the Triggers on screen overlap with a Trigger Mark, make your move!

The red, yellow, and green circles are called “Triggers.” When they overlap with the white circles to the right of the screen called “Trigger Marks,” make a well-timed move with a button or stick!

Simple controls make for intuitive gameplay that anyone can pick up.

There are three difficulty levels to choose from for each piece of music: Basic / Expert / Ultimate. In addition, about one-third of the songs offer the highest difficulty level, “Supreme”!

Defeat waves of enemies in time with up-tempo battle music!

Journey forth with your party to relaxing field music!

Play to the beat against a backdrop of unforgettable scenes from each title!

—Choose from your favorite titles!

Relive a total of 29 past titles and unlock their songs as you go.

Characters associated with each title will join your team.

—Advance through the map by clearing each stage!

Each song also has its own quest, such as “Defeat 10 ‘Bomb’ enemies,” and songs cleared in this mode are unlocked to play in Music Stages.

Form a party with your favorite characters! You can have up to four characters of your choosing in your party.

You can set up to three abilities for each character. There are various types of abilities, including attack and healing, as well as character-specific abilities.

Call forth summons in a Battle Music Stage by setting a summonstone. Summonstones come with random bonus effects. Try to get your favorite summons with better and better effects!

In addition to characters and summons, you can also change moogle styles and airships. Neither affects your stats or gameplay, so set whichever moogle and airship you think looks best.

Characters can be obtained by unlocking their associated title in Series Quests. You can also obtain enemy characters by clearing the final stage for each title!