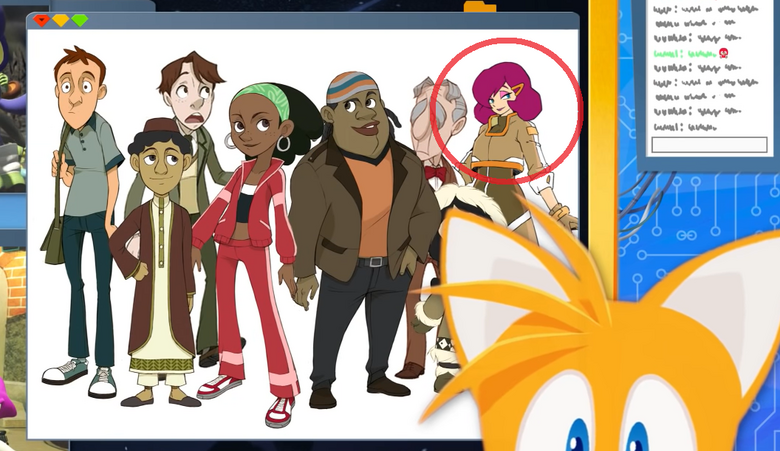 Earlier this week, Tails officially became a VTuber (virtual YouTuber) by kicking off his TailsTube series. The first episode included a guest appearance from Sonic, but there’s another character that fans were much more intrigued by.

Circled in the image above, concept art for a mysterious pink/purple-haired woman can be spotted. She pops up in the background of the video around the 2-minute mark, and Sonic fans are losing their mind over her. Just who is she and why is she snuck in there?

First off, the character sticks out like a sore thumb when compared to everyone else in the image. She’s drawn in a completely different style, and it seems she was inserted into that image very specifically. Just what is SEGA up to with this?

Some fans think this character is going to play a part in Sonic Frontier, the next big Sonic game. Ian Flynn, the current writer on the Sonic comics series, is also handling the narrative in Sonic Frontiers. When he was asked about this woman via Twitter, he simply responded by saying #knowingsmile.

That all but seals the deal of this character being a tease. It just leaves us wondering what exactly the tease is for. Will this be a character in Sonic Frontiers, or a character that pops up in an upcoming Sonic comic? We don’t have any answers right now, but we’ll certainly keep our eyes peeled for any further discoveries.