Meet two of your new heroes 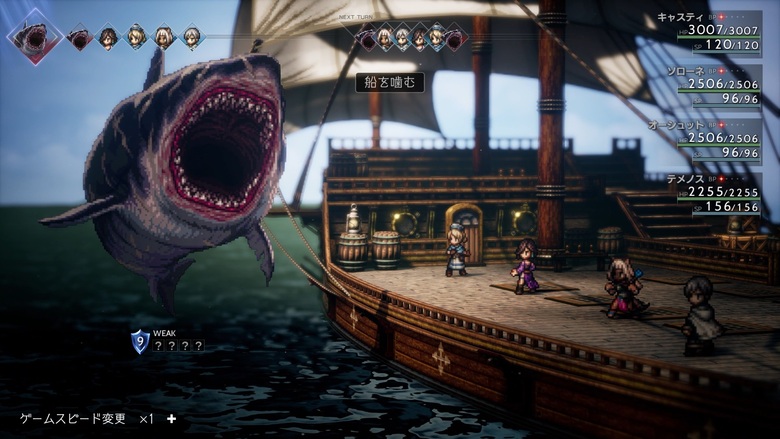 Square Enix has shared a massive new round of details for Octopath Traveler II. In today’s update, we get to learn about Osvald the Scholar and Partitio the Merchant, along with details on water travel. There’s also an absolutely huge amount of screens and art to sift through. You can find galleries full of assets here. As for the details mentioned above, you can find those below.

This game is a brand-new entry in the Octopath Traveler series, the first installment of which was initially released in 2018 and sold over three million copies worldwide.

It takes the series’ HD-2D graphics, a fusion of retro pixel art and 3D CG, to even greater heights. In the world of Solistia, eight new travelers venture forth into an exciting new era.

Where will you go? What will you do? Whose tale will you bring to life? Every path is yours to take. Embark on an adventure all your own.

The story takes place in Solistia, a land comprising an eastern and western continent divided by the sea.

It is a bustling era, wherein large vessels navigate busy sea routes and the power of steam gives birth to new technologies.

Some people thrill to glamorous stars of the stage and industry, while others are brought to tears by war, plague, and poverty.

In this faraway realm, eight travelers hailing from different regions venture forth for their own reasons. Step into their shoes and explore the land as you see fit.

Your name is Partitio Yellowil, and you are a merchant. Your tale begins in the vast wastes of the Wildlands. After witnessing the rise and fall of the pioneer town you call home, you set your gaze upon the horizon.

“I’ll be back once I eliminate that devil called poverty from the world!”

With dreams of bringing prosperity to all, you embark on a journey with only the scent of commerce to guide you…

Partitio’s father, and the man who taught him all he knows about commerce. He came to this barren land 16 years ago and helped build Oresrush from the ground up.

Papp’s business partner. He and Papp purchased a promising plot of land, anticipating it would be rich in silver. It has since bloomed into the town of Oresrush. Partitio admires him for being a pioneer in business.

A scrivener for the Delsta Times who travels the world looking for the latest scoop. Partitio’s actions have caught her eye, and she seemingly appears out of thin air to get all the juicy details.

■ Partitio’s Adventure Begins in The Wildlands

Northwest Solistia is a barren wasteland—a blasted expanse of volcanic rock that resists even the loneliest blade of grass. The few brave souls who eke out their existence here have long suffered the sulfuric whims of Fiatsuro and its unstable neighbors. But life always finds a way. Among the rock and stone dwell the golt, an unusually large breed of goat who subsist on a meager fare of local weed. The cheese produced from their milk is especially scrumptious, and has become a local specialty. The volcanic soil conceals a wealth of valuable minerals. Many small mining towns have sprung up here, including the southern town of Oresrush, established by silver merchants Papp and Roque.

Obtain items from people. You must have enough money to purchase their belongings.

—The more valuable the item, the higher the price. Put your business prowess to the test.

Bring people along on your journey. You must have enough money to hire someone.

—Hired helpers can be summoned during battle to provide aid.

—Different people provide different benefits. Use your funds wisely to hire a variety of helpers.

Depending on who you have hired, you might receive benefits in business and battle.

You could be granted a discount when shopping, receive more leaves when selling items, pay less when using certain skills in battle, and more.

—Some partners can negotiate a discount when purchasing. Others give you a chance to get items for free…

—Merchants can use Hired Help to summon mercenaries into battle. Your partner may be able to lower the mercenary’s cost.

When his latent power gauge is full, Partitio can fully and instantly replenish a party member’s BP to turn the tide of battle.

—Partitio’s latent power can replenish all BP in an instant, whether at the onset of battle or immediately after exhausting all points.

—Use BP however you see fit. The merchant ability Donate BP also allows you to grant BP to allies.

Your name is Osvald V. Vanstein, and you are a scholar. Your tale begins in the snowswept reaches of the Winterlands. You have been sentenced to life in prison for murdering your wife and daughter, and have since spent 1,879 days locked within a frigid cell.

“Harvey—the man who took everything from me— shall die by my hand. I swear it.”

Not even the bitter cold can extinguish the raging fire in your breast. And so you set out to exact your revenge…

A scholar of magic who is on par with Osvald. He continues his research into the seventh source of magic, which differs from the six known elements of fire, ice, lightning, wind, light, and darkness.

A fellow prisoner of Osvald’s on Frigit Isle. He leverages his knowledge as an informant to help Osvald escape.

Osvald’s research assistant. She believes that Osvald is innocent and watches over his study in his absence.

Northern Solistia is a frozen place of snow and ice. Its capital is Stormhail, a mountainous city that houses the Sacred Guard. Established roughly 380 years ago, the Sacred Guard was the brainchild of Archbishop Kinchler. After the cold snap that assailed the eastern continent in the previous century, the order established its headquarters here. To this day, this holy organization’s mission remains unchanged: to uphold law and order across the continent. Travel towards the coast, and you will find the fishing town of Cape Cold. Great hauls of salmon, trout, mackerel, squid, and more are brought in almost daily. In addition, many who dwell here work in agriculture or textiles, and lately, a hardy species of cold-resistant barley has caused quite a stir.

Glean information from people (with a given probability). Fail, and your reputation in town will suffer.

—You won’t be able to use Path Actions if your reputation suffers. Raise Osvald’s level to increase his chances of success.

Obtain items from people. You must best them in battle to get the spoils you seek.

—Mug someone to commence the battle. Emerge victorious, and you can take all their belongings.

Osvald can gain insight into one of a foe’s weak points at the start of battle.

—Osvald will automatically use Study Foe when the battle begins. Knowing an enemy’s weakness is invaluable when strategizing.

When his latent power gauge is full, Osvald can focus spells that usually target all foes onto a single target with increased potency. Boosting can further enhance this magical might.

—Many of Osvald’s magic skills target all foes. His latent power allows you to deal heavy damage to bosses and other powerful enemies.

■ Travel on the Water

In this installment, you can board canoes to explore towns and caverns like never before. Traverse both land and sea to venture to every corner of the realm.

—You can board a canoe to explore towns, dungeons, and more. What treasures await on the realm’s isolated isles?

Octopath Traveler II —Enjoy the nautical journey, but beware of enemies lurking beneath the water’s surface.

■ A Vessel All Your Own

Advance through the story, and you can obtain your own nautical vessel. Use it to journey between continents, or chart your own course out to sea and disembark on unexplored islands. The world is yours to explore.

—You can choose your vessel’s color and sail emblem.

—There are places only your vessel can reach, like mysterious islands and sunken ships.

Osvald and Partitio come across a man who has collapsed on the street. He turns out to be an old friend of Osvald’s and an Astronomer. Intrigued by his story, the two eventually find themselves embroiled in his troubles…