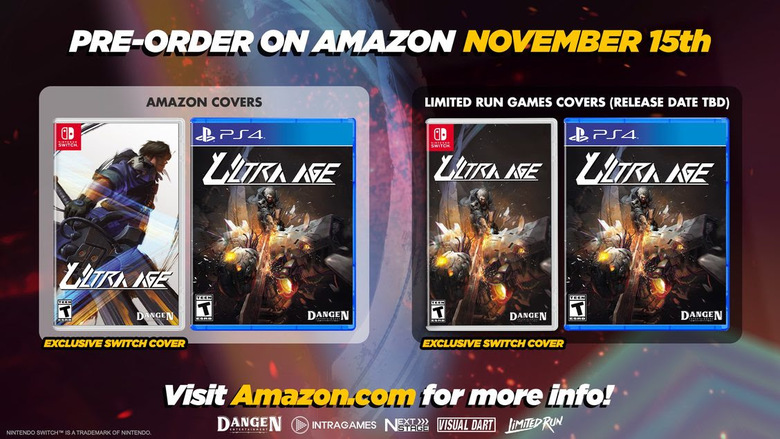 DANGEN Entertainment has also announced that the DLC rogue-lite expansion Rebirth Project will be available for Switch on November 3rd, 2022. The DLC is free to all owners of Ultra Age, adding a significant amount of value to the game.

Rebirth Project is a completely new rogue-lite side game with loads of content that can be accessed from the main menu after the player has reached a certain point in the main game.

While exploring a portal in the Frontier Shelter, Age is suddenly transported to what appears to be a laboratory by an unknown force. The laboratory seems to be a testing site for analyzing creatures, filled with many devices to measure and record combat capabilities and strengthen their weaknesses. The subjects undergo repeated experiments in order to reach perfection, created solely from data.

Age becomes a reincarnation, constantly respawned by Helvis in the laboratory, with a ‘different Age’ participating in an experiment each time… A combat experiment that cannot be escaped until it is fully completed. Will Age be able to escape the ‘Rebirth Project’?

Every run in the lab is different. Players control Age’s reincarnation and fight through a series of hexagonal zones on each floor, comprising battle, challenge and elite zones with increasing difficulty and rewards. The player may not backtrack and new monsters and bosses not seen in the main game will appear. Floor layouts include Upgrade, Recovery and Shop zones to help players continue their run. If the player dies, Age will lose his current buffs and reincarnate in the Lobby where accumulated crystals can be used to permanently upgrade Age for a better chance at survival in their next attempt. The laboratory consists of 30 floors in total, with a major boss fight every 10 floors and the Final Boss on the 30th, guarding Age’s escape.

The ‘Rebirth Project’ incorporates a ‘Synergy’ effect that gets stronger the longer Age survives in a run. The ‘Modules’ used to increase capabilities in the original game have been expanded and enhanced – they now offer unique buffs to Age during each run that can be found and employed in a more simplified manner. This allows the player to combine Module and Blade characteristics to create powerful builds that weren’t possible in the original game.

In Rebirth Project, affinities of blades in the original game such as the Katana, which is strong against living creatures, and the Claymore, which is strong against robots, have been modified to deal more damage. Affinity buffs against enemies remain intact, while the damage reductions have been removed, making for a more comfortable combat experience. Players are free to switch blades more often to continue their combo strings.

Rebirth Project adds a completely separate, huge game experience to Ultra Age with tons to unlock, where players can challenge themselves and hone their skills, providing hours and hours of gameplay for free. All versions of Ultra Age have recently received a patch update that includes minor bug fixes, performance enhancements, and added convenience for the Rebirth Project DLC.