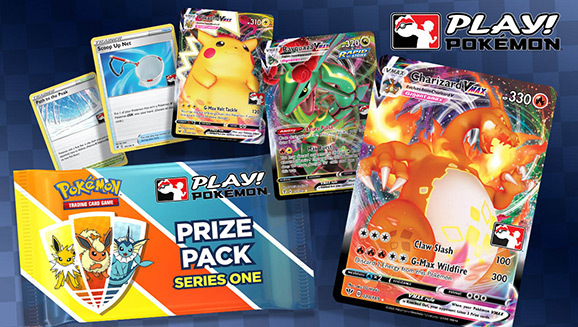 Each Prize Pack contains six cards taken from a pool of about 200—all of which are legal in the Standard format, including everything from popular Pokémon to exclusive foil upgrades of tournament mainstays, all featuring the special Play! Pokémon logo. Here’s just some of what you can expect to find in Series One:

Prize Pack Series One will have a limited duration to catch up with our recent break from in-store events, with a new series dropping every six months starting in February. You can expect Series Two in February 2023, Series Three in August 2023, Series Four in February 2024, and so on.

For competitive and casual Trainers alike, the Prize Packs offer an exclusive way to build your collection while having fun at Play! Pokémon events at your local game store. How Prize Packs are distributed will vary from location to location, depending on what works best for your store. The more active your events are, the more Prize Packs will be available, so spread the word and bring a friend to support your local community!