Survival just got a little tougher 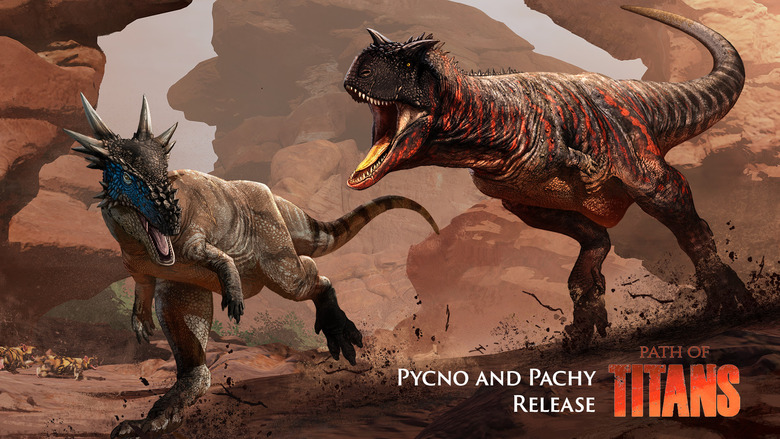 Feel the ground shake as two new scale covered beasts clash out on the plains of Panjura in Alderon Game’s Dinosaur Survival MMO, Path of Titans.

Face your problems head-on with the Pachycephalosaurus, a headbutting, hard charging, spike jawed… grass eater? Dominate any potential predator with this thick-skulled herbivore’s ability to ram into foes and knock them back, following that up with a barrage of tail and claw attacks to sending them scurrying, all so you can get back to a peaceful meal of berries and plants.

Or perhaps you’ve got a taste for meat and would rather stalk the trees with the apex predator of the deep forests, Pycnonemosaurus. A terrifying theropod coming straight from the heart of Brazil, Pycno is a carnivorous contender looking use its own brand of bloodlust to take the crown from the Tyrannosaurus and sit atop the food chain of Panjura.

Both of these fearsome beasts come launch today in Path of Titans, which is available now on Nintendo Switch, PlayStation 4 & 5, Xbox One & Xbox Series X, PC (Windows, Mac, Linux), and Mobile (iOS & Android) with the Standard Founder’s Pack costing $30 USD.