So much to pick from! 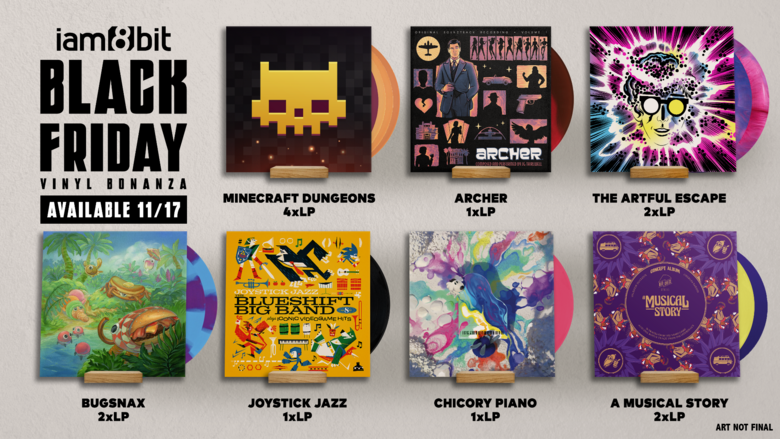 While there are 8 soundtracks going up for pre-order this week, not all of them are Switch game-related. You can see the full breakdown of just the Switch game soundtracks below.

The Artful Escape 2xLP Vinyl Soundtrack ($41.99) - Music is the heart and soul of The Artful Escape’s trippy, otherworldly adventure. Developer Beethoven & Dinosaur’s debut title is a deeply personal, reflective work, filtered through the prism of rock ‘n’ roll. This vinyl collection is two discs packed with the best of the game’s psychedelic soundtrack.

Joystick Jazz: The Blueshift Big Band Plays Iconic Video Game Hits Vinyl Album ($31.99) - The Blueshift Big Band reimagines classic tunes from Sonic the Hedgehog, The Legend of Zelda: Ocarina of Time, and many others with a magical, toe-tapping twist. These energetic renditions of time-tested favorites are a great listen for everyone – even those who don’t know their Banjos from their Kazooies.

Minecraft Dungeons 4xLP Vinyl Soundtrack ($100) - What’s a dungeon crawl without a great soundtrack? Mojang Studios mixed your favorite tracks from Minecraft Dungeons with fresh remixes by an all-star group, including work done by: Eevee, The Deli, WunTwo, and many more. This 4-disc LP is presented on red-hot lava-colored vinyl and packaged in block-busting album art from Mojang Studios themselves. Along with that, iam8bit will be giving The Artful Escape a physical Switch release, and you can see the packaging for that above.

The Artful Escape Physical Edition ($29.99-$34.99) - For their debut title, developer Beethoven & Dinosaur crafted an intergalactic Bildungsroman about identity, purpose, and the liberating power of rock ‘n’ roll. Now, in collaboration with our pals at Annapurna Interactive, iam8bit is proud to present physical Standard Editions and iam8bit Exclusive Editions of The Artful Escape on PlayStation 5 and Nintendo Switch. The iam8bit Exclusive Edition includes an exclusive cover sheet and a thematically appropriate bonus collectible guitar pick.