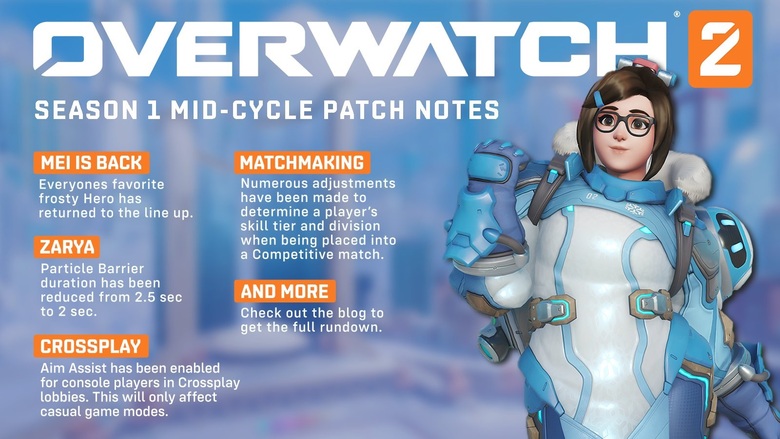 After a bit of a delay, the mid-season update for Overwatch 2 is now available. You can see the full details on this update below.

Celebrate the Overwatch League’s Tournament Champions with the Royal Gladiator, Dallas Summer, and Shanghai Summer Legendary Skins! These skins are purchasable for a limited time with Overwatch League Tokens.

We’re continuing to monitor the health of competitive play and matchmaking across Overwatch 2, both for returning and new players. We’ve made numerous tuning adjustments on the server for both the initial and continued determination of a player’s skill tier and division, many of which will become even more noticeable at the start of Season 2.

We’ve increased the precision of our queue time estimates for each individual role in role queue.

The audio transcription feature has been added with a limited rollout for PC players in select countries. As a piece of our Defense Matrix initiative, audio transcriptions allow us to analyze a transcript from a temporary voice chat recording of a reported player. Players will now see a notification when entering voice chat for the first time during a play session indicating that voice chat may be recorded. Make sure you report as close to when disruptive behavior occurred to maximize this feature’s effectiveness. Once reported, a temporary audio recording will be used to make a text file transcript through speech-to-text programs. No one listens to the temporary audio recording, which is quickly deleted after being transcribed. Transcriptions are only made for reports of disruptive behavior in public voice channels, which includes team and match chat—group “party” chat is excluded.

We made a change to Aim Assist in Crossplay (PC+ Console) lobbies. If you play in a Crossplay game now, Aim Assist is enabled in all matches except Competitive.

In our data, we found many groups were crossplay groups between PC and console players. This meant if you were playing on console and grouping with players on PC, you were opting into a bad experience for yourself to play with your friends. Also, if you had a group that was primarily console, but one of your friends was a PC player, you had to leave the PC player out to have a good experience.

We’d like to reiterate—at this point Aim Assist exists only on console platforms.

We’ll be monitoring the deployment of this change carefully and making changes quickly if needed.

Check out the patch notes for each Hero here
[Blizzard]