Framing up the competition 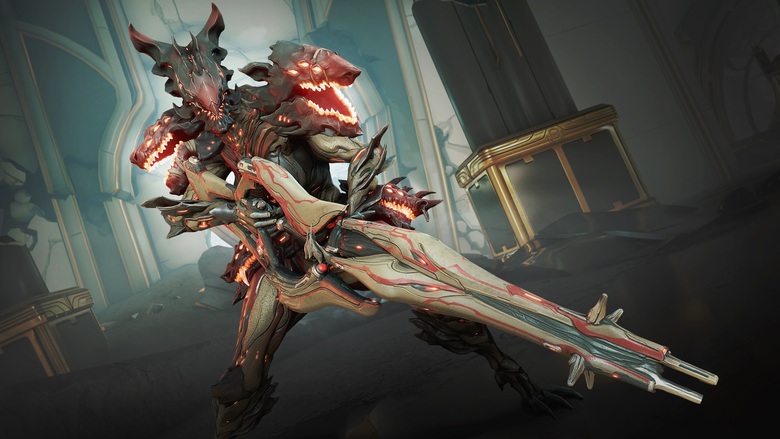 Global games publisher and developer Digital Extremes will launch Warframe’s Lua’s Prey update for all platforms on Wednesday, November 30. Something sinister is rumbling on Lua as The Void exposes ancient scars and revives long lost secrets. As the Grineer and Corpus descend upon these newly exposed halls sensing possible treasure in their midst, The Lotus embarks all Tenno on a mission to investigate this destroyed piece of Lua formerly used to monitor Void Conjuctions. Delivering a new story-based Survival mission, the community-inspired 51st Warframe Voruna, cosmetic offerings, plus the return of Nora Night and more, Lua’s Prey delivers light narrative and thematic teasers for The Duviri Paradox (launching 2023) and is loaded with exclusive new content to leave players moonstruck.

Keep an eye on the battlefield! Triggering the alarms introduces a spectral Dax Soldier of familiar but distant origin making way towards Life Support Towers throughout Lua and surrounded by an enigmatic energy null of all color. Entering this area grants players 100% Ability Strength and a 50% Casting Speed buff for 5-seconds. These buffs refresh as long as the player remains in the area of effect.

Call Upon the She-Wolf Incarnadine, Voruna, and Her Loyal Wolf Pack

A relentless hunter of god-prey and shadow of the night, Voruna is Digital Extremes’ 51st playable Warframe debuting on all platforms for players to instantly unlock or earn in-game when Lua’s Prey launches on November 30. Voruna’s mind-bending design was developed in collaboration with one of gaming’s masters of monsters Joe ‘Mad’ Madureira (Darksiders) of Airship Syndicate and named by Warframe’s community thanks to their incredible generosity during the 2022 Quest to Conquer Cancer charity campaign.

Voruna is a monstrous beauty - four beasts, one heart. Her loyal wolf pack offers a deadly combination of strength and stealth to players, with each wolf offering a unique Ability.

For more information about Voruna’s history in the Origin System, a new entry in The Leverian where players can also add her Prex Card to their collection. Voruna can be purchased from the in-game Market with Platinum and can also be earned by collecting her blueprint and components through gameplay.

For players looking to instantly unlock Voruna on November 30, The Pack’s Heart bundle offers immediate access to the base Warframe Voruna, her signature Sarofang melee weapon and Perigale revolving sniper, an Alternative Helmet, plus the Okuri Tails Ephemera and Voruna’s Voidshell Skin.

Reimagine Your Fashion Frame with Bold and Beautiful New Cosmetics

Bolster Your Arsenal with Powerful, Time-Limited Bundles from the Warframe Market

Digital Extremes is testing new time-limited bundles to bring players the best possible value when instantly upgrading their Arsenal. A selection of bundles will be available from Warframe’s in-game Market when Lua’s Prey launches, including some of Warframe’s most popular content and resources at discounted Platinum prices. These bundles will be available for a limited-time only and are meant to help accelerate the journey in the Origin System with Boosters, Mods, Upgrade Materials, and more.

● Complete Upgrade Bundle: Upgrade your Arsenal with access to 3x Forma, and Orokin Catalyst and Reactor, plus an Exilus Warframe and Weapon Adapter

Similar to Vol. 2, Nora’s Mix Vol. 3 will add new weekly goals, such as an Archon Hunt, for players to complete. Like previous editions of Nightwave, duplicate protection is offered for rewards that players have already unlocked. Identical to Nora’s Mix Vol. 2, players can expect to be compensated with Nora’s Mix Vol. 3 Creds instead of the previous unlocked reward. Some reward highlights for Nora’s Mix Vol. 3 include the new Proto Necramech Skin, Mods, and Noggle Statues.