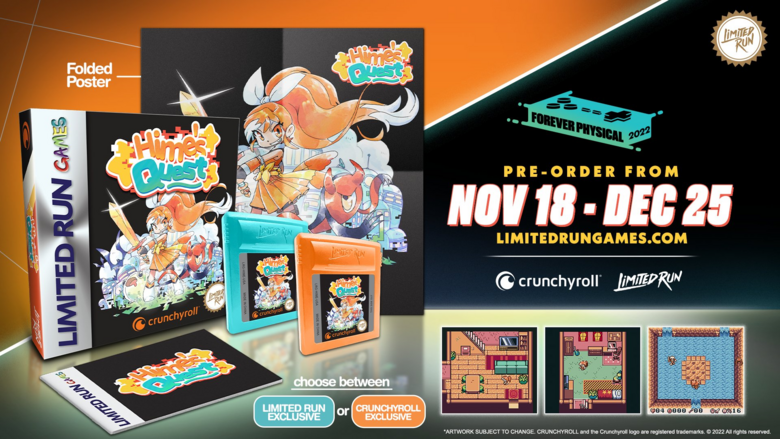 There are two different versions of Hime’s Quest to grab, with Crunchyroll selling an orange cart and Limited Run Games offering a teal one. Both are priced at $45 and include the following:

Take control as Crunchyroll-Hime to save the anime club from Y2K in her first-ever video game: Hime’s Quest. Set in 1999, something electric is in the air. A malevolent force has crept into New Crunchy City, wreaking havoc on its technology, and tragically destroying the Anime Club’s precious DVD / VCR combo player. Can you root out the dastardly cretin brazen enough to ruin their meeting?

Adventure through haunted forests, mirage-filled deserts and more in Crunchyroll-Hime’s largest quest yet.

Hack and slash your way through dungeons and face-off against totally buggin fiends in league with Y2K.

Kick-back with Crunchyroll-Hime’s friends in the anime club or pay a visit to spooky manga creator Junji Ito who is currently OBSESSED with spirals.

Some games let you pet the dog, this one lets you try to pet the cat. Can you succeed and give Crunchyroll-Hime’s best friend Yuzu a pat on the head?