Galaxian and Tetris: The Grand Master are the next titles coming to Arcade Archives 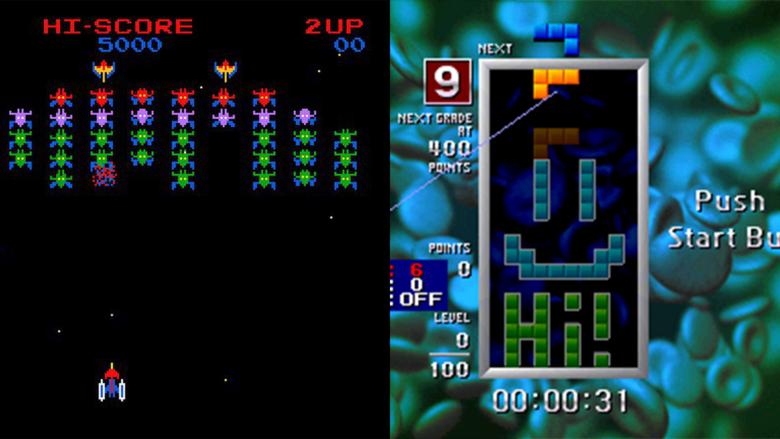 Hamster has announced that the next title coming to the Arcade Archives series is Galaxian, an arcade-fixed shooter game originally released by Namco back in 1979. The game will be released on Nintendo Switch on November 24th, 2022, priced at $7.99.

Furthermore, it was also revealed that the next title releasing after Galaxian is Tetris: The Grand Master, which will release on December 1st, 2022. Galaxian will be Hamster’s 300th release ever since the Switch launched back in March 2017, and have announced that they will start releasing games from the 1970s, and 32-bit titles, starting with Galaxian.

About Galaxian (via Wikipedia):

Galaxian is a space shoot ‘em up video game. The player controls a starship called the “Galaxip”, the objective being to clear each round of aliens. The enemies appear in formation towards the top of the screen, with two escort ships, labeled the “Galaxian Flagship” or “Galboss”. Enemies will make a divebomb towards the bottom of the screen while shooting projectiles in an attempt to hit the player. The Galaxip can only fire a single shot at a time, and the player must wait for it to either hit an enemy or the top of the screen before being able to fire another, due to limitations of the hardware.

Flagships will make a divebomb with two red escort ships - shooting all three of these will award the player bonus points, with extra points awarded to the destruction of the flagship. Enemy movement will increase as the game progresses alongside the number of shots that the enemies fire. Rounds are indicated by small flags at the bottom of the screen. The game’s attract mode featured a slim scenario, reading “WE ARE THE GALAXIANS. MISSION: DESTROY ALIENS”.

About Tetris: The Grand Master (via Tetris.wiki):

When the player is about to increment the hundreds digit (e.g., level 399), only line clears will increase the level. Level 998 is treated similarly, with a final line clear required to reach 999 and finish.

Normally a piece will appear in the rotation showed in the piece preview. With IRS, holding either the left or right rotation button will cause the piece to appear rotated 90 degrees. This allows the player a higher degree of freedom when placing pieces at higher game speeds.

TLS Main article: ghost piece Abbreviation for Temporary Landing System This system is a semi-transparent representation of where the piece will land if allowed to drop into the playfield. It is displayed up to level 100.

Buffer zone Above the playfield, the game uses a single-row buffer zone, effectively extending the height of the playfield from 20 to 21. Row 21 allows blocks that lock in it to reappear once the stack is lowered. Any row above it, however, is not part of the buffer zone, meaning that blocks that lock in such rows get deleted and will not reappear once the stack is lowered.

You can take a look at the gameplay videos for both games below.