Microids has announced that New Joe & Mac: Caveman Ninja is set to release for Switch on November 24th, 2022. Accompanying that announcement is a fresh gameplay trailer, which you can check out above.

When “Rock & Roll” was just rock and “fast food” a dinner running away from you, two cavemen named Joe & Mac were living quiet lives in their peaceful village. Peaceful until a bunch of Neanderthal primates ransack the village and kidnap all the women!

It’s time for our cavemen to go head to head against dangerous dinosaurs and other carnivorous plants to free their beloved wives! Don’t be fooled by these entirely reworked graphics, New Joe & Mac promises to be brutal and completely crazy!

Developed by Mr. Nutz Studio (Toki, Asterix & Obelix: Slap Them All!) this new iteration of the cult arcade classic will invite players to discover a trustful remake and enriched with an Arcade Mode, offering a remaster of the original game, as well as a longer version of the story mode called Extended. Just like the original game developed for arcade play in the 90’s, New Joe & Mac: Caveman Ninja will offer a local two player co-op mode. Additionally, the game will also contain a training mode, a boss rush mode and even a speedrun mode! 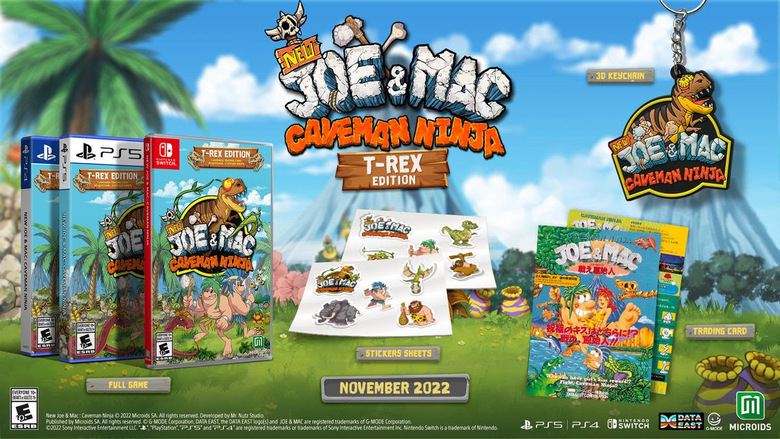 Those interested in going the retail route will be excited for the New Joe & Mac: Caveman Ninja T-Rex Edition, seen above. This package will include the following goodies.